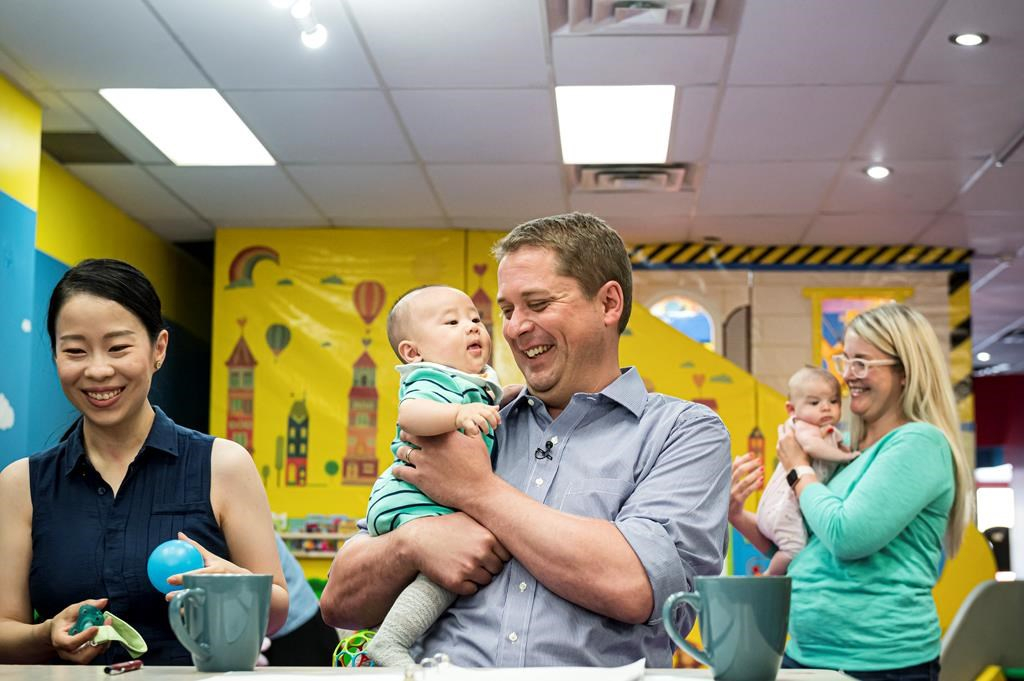 Andrew Scheer made a pre-campaign play for parental votes Tuesday as he promised that a Conservative government would introduce a tax credit for new mothers and fathers receiving special employment insurance benefits so they can stay home with a new child.

The government taxes employment insurance benefits for new parents, along with any employer top-up, while on maternity or parental leave, although parents can be in for a surprise at tax time if not enough money was deducted off each payment.

What the Conservative leader proposed Tuesday — during an event at a Toronto daycare, surrounded by new and soon-to-be-mothers — is a non-refundable tax credit on 15 per cent of whatever a new parent earns while they are on leave to reduce their taxes at the end of the year.

It's an idea he first unveiled through a private member's bill in early 2018, part of an early gambit to encourage families to support the Conservatives in the Oct. 21 vote. He also vowed to keep the Canada Child Benefit.

The parliamentary budget officer calculated in May 2018 that Scheer's plan would cost the federal treasury about $600 million in its first year, and $261 million in future years, since the plan would let families carry over any unused credits.

Scheer argued that the proposal would be a "significant tangible benefit" directly to parents to help ease the cost of caring for children in that first year — part of a larger theme of cost of living that he said will permeate the Conservative election platform.

"It is a Conservative principle to provide support directly to parents, that's something that Liberals fought against for decades," he said.

"Of course we're going to continue to support that program (Canada Child Benefit) and any program that provides those child care dollars or support for raising children directly to parents."

Polling data suggest Conservatives fare poorly with younger female voters — particularly ones who claimed the majority of the almost $4 billion in maternity and parental benefits the federal government doled out in 2017-18.

Offering those voters some additional financial help could help the party while also making it difficult for their opponents to attack the measure, said Christian Bourque, vice-president of Montreal polling firm Leger.

"What they're announcing ... actually targets the least likely voter for the Conservatives," Bourque said. "They're doing well among women 55-plus, so no need to throw money at them — that's the other way of seeing it."

EI covers 55 per cent of earnings, up to a maximum amount, over 12 months for those who have enough qualifying work hours to be eligible for benefits.

The Conservative proposal wouldn't apply to any other benefits that new parents might mix in, such as caregiver benefits if a newborn falls ill, or sickness benefits for the parents themselves — those would remain taxed at the same rates.

Nor would there be any changes to an exemption that allows new parents to keep a portion of any extra cash they earn without losing too much of their benefits.

The parliamentary budget office previously said that the proposal, if implemented, would likely help those at higher income levels the most by reducing the amounts they owe. Those at lower income levels already pay little, if any, taxes.

Experts, labour and business groups have called for other changes to the parental leave system to allow more parents to qualify and boost the value of benefits paid out. As is, about one-quarter of mothers outside Quebec aren't eligible for benefits because they don't have enough qualifying hours.

Jennifer Robson, an associate professor of political management at Carleton University in Ottawa, questioned how much the Tory proposal would actually save at the end of the year. She also questioned how much it would help low-income parents, having spent years studying the EI maternity and parental benefits system.

"If you have a higher income before starting leave as a parent, you're already more likely to qualify for EI. But 30 per cent of new moms don't get $1 out of EI, even if they paid into it. Maybe there are better ways to help more families with infants?"