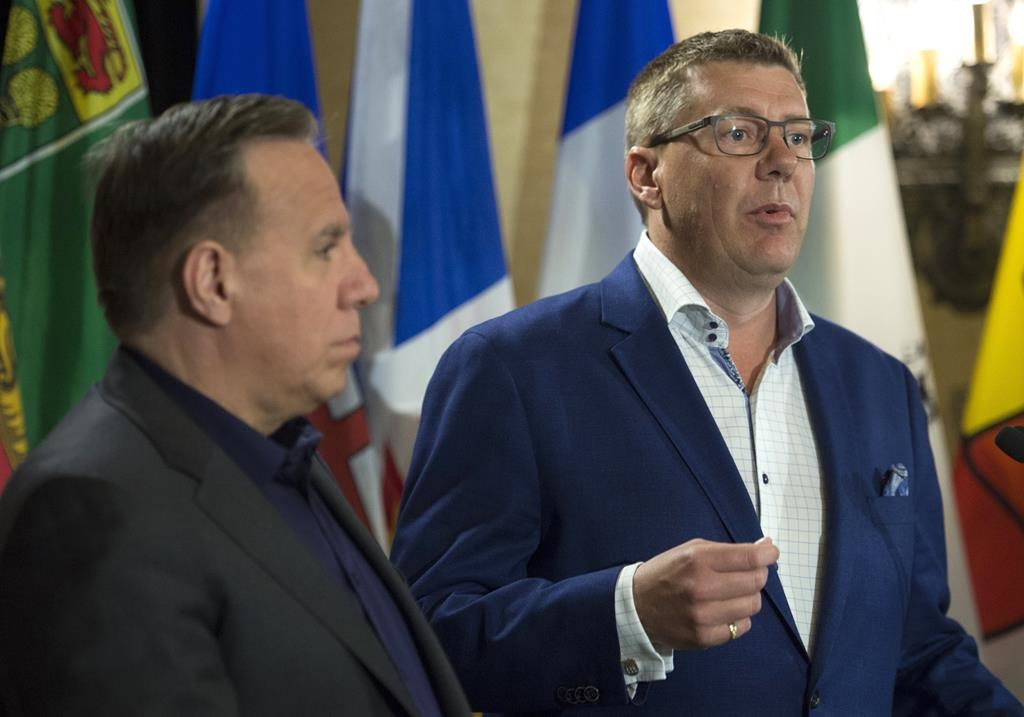 The Saskatchewan government says the federal carbon tax is killing jobs, but experts and even the province's trade minister say it's not that easy to calculate.

The government reports that jobs are down in the oil and gas sector by about 1,400 and by another 1,500 in mining compared with July 2018.

The province brought in its own tax on excess emissions from heavy industry in January, but consumers became subject to the federal carbon tax in April, because Saskatchewan did not have its own pricing deemed acceptable by Ottawa. The province is taking its challenge of the federal tax to the Supreme Court.

"You're not going to be able to directly link exactly to the carbon tax," Trade Minister Jeremy Harrison told The Canadian Press in a recent interview.

"It is killing jobs because it's making us less competitive."

One of Premier Scott Moe's arguments against the tax is that it costs jobs.

Harrison concedes job losses in the energy sector are not the result of any sole factor, but a confluence of different issues.

He points to a lack of new pipelines as well as to federal legislation that overhauls how large energy projects are approved and restricts tankers off the British Columbia coast. He says those things put Canada at a competitive disadvantage compared to other jurisdictions.

The carbon tax is another layer, says Harrison, although he adds it's hard to measure its immediate impact over a short period of time.

At the same time as Saskatchewan voices its concerns, the province reports an increase of more than 12,000 mostly private-sector jobs in the last year.

Harrison says job growth and the carbon tax's effect on employment are not "mutually exclusive."

"The fact that we've been creating private-sector jobs outside of the energy sector, outside of the mining sector, speaks to a wonderful entrepreneurial spirit in the province."

Trent Wotherspoon, finance critic for the NDP Opposition, says the government is playing "fast and loose" with an important file and didn't even factor in potential costs of the carbon tax in its last budget.

Alberta comes at the numbers from a different position.

The NDP there brought in a provincial carbon tax when it was in power, but Premier Jason Kenney's United Conservatives got rid of it not long after they won the April election.

An email from the Environment Department says economic modelling estimates the repeal will create 6,000 new, full-time private-sector jobs and increase GDP by $1.3 billion.

Alberta is also challenging the federal tax, which Ottawa says it will apply to the province in the new year.

Some experts say not enough time has passed and not enough research has been done to know what impact federal carbon pricing is having on jobs.

One study concludes the province's revenue-neutral tax doesn't hurt employment. It says while jobs in "carbon-intensive and trade-sensitive industries" were affected, employment rose in clean industries.

The other study reports between one to two per cent increases in unemployment rates among men with low to medium education levels.

"It's not at all clear that B.C. has had employment losses. Maybe it has if you look in certain specific areas, but it's not an economy-wide issue," says Tombe.

"Looking at the question in a black-and-white way is probably not the right way for these particular leaders to go about doing it."

He adds that the carbon tax is likely to result in a lower rate of economic growth until it reaches its maximum of $50 a tonne in 2022. He says any action to reduce emissions comes with an economic cost in terms of GDP growth.

Brett Dolter, an economics professor at the University of Regina, says statements that the carbon tax is "job-killing" need to be tested.

"Any analysis of the impact ... would need to consider that 90 per cent of the revenue raised through the carbon tax is returned to households through rebates on their income tax returns," he wrote in an email.

"People will still have money to spend, but they may spend it on goods and service that pollute less, and jobs will shift accordingly."