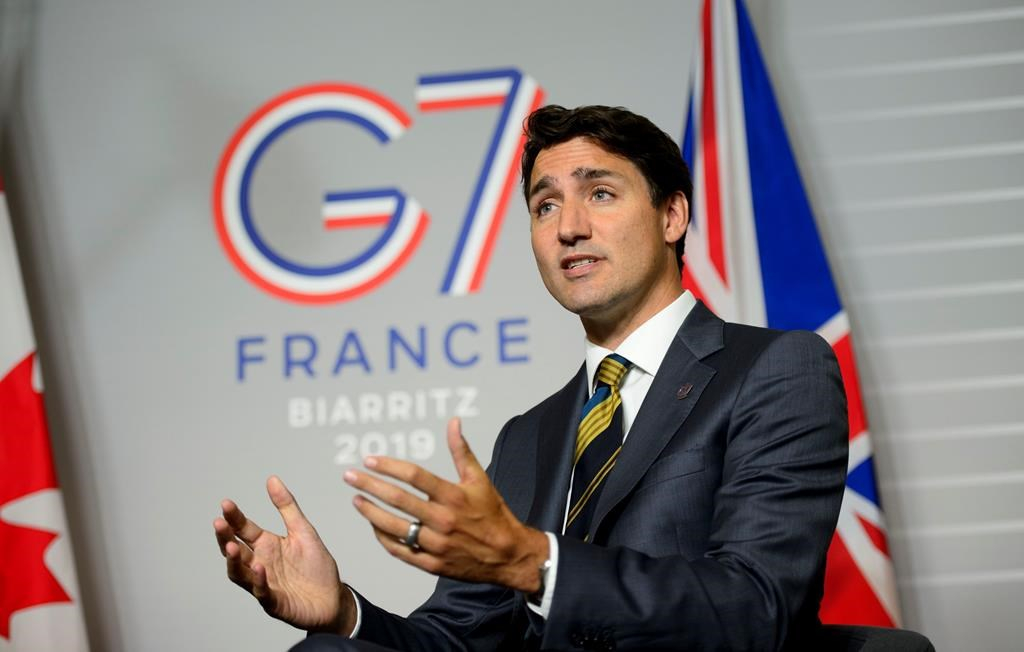 Prime Minister Justin Trudeau takes part in a bilateral meeting during the G7 Summit in Biarritz, France, on Saturday, Aug. 24, 2019. Photo by The Canadian Press/Sean Kilpatrick
Previous story
Next story

As leaders of the now-fractious Group of Seven countries gathered in France on Saturday, even the weather seemed divided.

Beams of sunlight cut through dark clouds as the G7 leaders paraded in for a greeting from French President Emmanuel Macron at the launch of this year's summit, which is expected to be driven by debates over the merits of free trade and nationalism.

European Council President Donald Tusk set the stage early Saturday urging the Group of Seven leaders to find common ground, especially on issues of security and trade, warning that trade wars "will lead to recession" — one day after a Twitter tirade against China by the U.S. president that sent investors running for cover.

The spectre of Donald Trump's scorched-earth style loomed large as Tusk acknowledged the mounting tension among G7 nations in recent years as they seek common ground at a time when greater co-operation was never more important.

"This may be the last moment to restore our political community," Tusk told a news conference in the seaside resort of Biarritz, France, where the leaders of the seven leading world economies have gathered for several days of meetings and talks.

"Trade wars will lead to recession, while trade deals will boost the economy — not to mention the fact that trade wars among G7 members will lead to eroding the already weakened trust among us."

It was only Friday when Trump angrily upped the ante in his trade fight with China, promising to increase planned tariffs on $300 billion in Chinese goods from 10 to 15 per cent in response to Beijing's decision to raise taxes on $75-billion worth of U.S. imports. He also "hereby ordered" American companies to find alternatives to doing business there.

"I have no choice. We're not going to lose close to a trillion dollars a year to China," he later said on a day when the Dow Jones Industrial Average closed 673 points lower. "Tariffs are working out very well for us. People don't understand that yet."

It's in spite of that superheated atmosphere that Prime Minister Justin Trudeau is hoping to build consensus on the virtues of free trade and strengthen Canada's trade ties with its G7 partners.

Trudeau met Saturday with British Prime Minister Boris Johnson for discussions that focused on how Canada's existing trade deal with the European Union would function in a post-Brexit Britain. It was the first face-to-face meeting between the two leaders since Johnson took over as prime minister of the United Kingdom in July.

Trudeau also met with Japanese Prime Minister Shinzo Abe, where they highlighted strong Japanese-Canadian ties forged from the successful launch of the rebooted Trans-Pacific Partnership late last year, as well as a chance to talk security issues amid rising tensions between Tokyo and South Korea.

Trudeau has been building allies among G7 and other world leaders, in part to show a united front to China after it detained Canadians Michael Spavor and Michael Kovrig in a move widely regarded as retaliation for the Canadian arrest of Huawei executive Meng Wanzhou late last year under an extradition agreement from American authorities.

During his meeting with Abe, Trudeau seemed particularly pleased to hear Abe mention he and Trudeau share a "strategic partnership," which includes a "shared vision of a free, open Indo-Pacific" — a nod at efforts by Canada and some G7 leaders to try to broker support for freer flow of goods and services amid Trump's nationalist approach.

The Canadian prime minister was keen to showcase his alliances among G7 leaders ahead of the official beginning of the summit's program on Saturday, highlighting at every turn his support for open trade and the relationships he has built or is building as G7 countries brace for how the ever-unpredictable Trump could disrupt discussions.

Upon greeting Trudeau on Saturday evening, Macron grasped Trudeau's arm several times in a mark of friendship and even held his hand for a few moments twice during their brief interaction.

The two leaders do not yet have an official bilateral meeting scheduled, but Canada's ambassador to France, Isabelle Hudon, said Saturday the two share a "chemistry" and she is convinced they will speak privately on the margins of the summit.

Trudeau will meet Sunday with Trump — a meeting that may not include hand-holding, but is expected to be polite at the very least.

Despite warm smiles and handshakes for photo-ops Saturday, Macron has played down any expectations of a unified front from the leaders — a legacy of last year's acrimonious ending to the gathering in Quebec.

Instead of a final communique to wrap the summit, Macron is aiming to publish outcome documents for following agreements reached between individual countries on different issues, including free trade, gender equity and the environment — an attempt to avoid the fate of the 2018 summit in Charlevoix, Que., when Trump lashed out at Trudeau from the confines of Air Force One and scratched his name from the communique.

A final communique is not the most important thing for the G7 summit, Hudon argued. Getting the world's Group of Seven leaders together to speak candidly about issues of joint interest — even if building consensus has become elusive, is more important, Hudon said.

"There's a shift in what the G7 is becoming. That being said, that's not a reason to stop the conversations."

Tusk said the summit "will be a difficult test of unity and solidarity of the free world and its leaders" but urged G7 leaders to find unity not only on trade, but also on climate action, defending the rule of law and human rights and combating the threat of nuclear proliferation — rather than focusing on "senseless disputes among each other."