Provinces, territories to have input in future price of carbon: McKenna 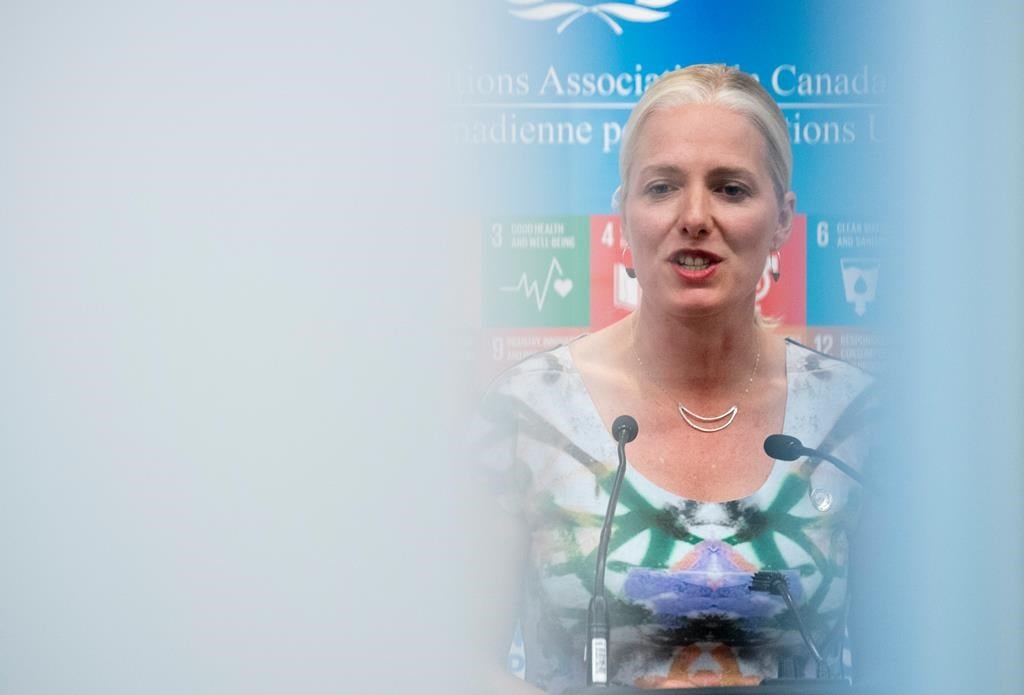 Minister of Environment and Climate Change Catherine McKenna speaks during an announcement in Ottawa, on Monday, August 26, 2019. Photo by The Canadian Press/Adrian Wyld
Previous story
Next story

Any decisions about future increases in the carbon tax would take into account the views of provinces and territories, the federal environment minister says, using language that sparked accusations from Conservatives that she was misleading voters about the future of the levy.

But Catherine McKenna also said the Liberal government's plan for the tax hadn't changed and there was "no secret agenda" by the party to pump up the price on carbon beyond the $50 per tonne it will reach in 2022.

McKenna maintained Monday that her language on possible increases in the price on carbon had been consistent, even though in June she said the price of carbon "will not go up," which at the time was taken as a pledge that the price would remain fixed beyond 2022. At the time, she pointed to other aspects of the Liberal government's climate plan as proof of how it would achieve Canada's emissions reduction targets.

On Monday, she said there was still "no intention" to raise the price after 2022, which is when there will be a review of the carbon tax under the terms of the 2016 framework on climate change. If there were any new decision on pricing, it would be the product of extensive consultation, McKenna said.

She added that the government was fulfilling promises set out following a lengthy negotiation with provinces and territories completed in 2016. As for beyond 2022, McKenna said she was not in a position to negotiate anything after that time.

"Look, there will be an election in 2023, and I think that might be a discussion for that election," she said.

McKenna denied she was attempting to avoid talking about the future costs of a price on carbon until after this fall's federal election, where the levy is a point of debate.

Conservative finance critic Pierre Poilievre quickly labelled what he saw as an apparent shift in position for this fall's election as a "carbon tax cover-up" in a press conference held earlier in the day.

The federal Conservatives have said they would eliminate the carbon tax if elected in October, and several conservative provincial governments have challenged the price in court.

"If this was such a popular idea, why are they covering it up? Why did Catherine McKenna stand up and deny that the tax would go above $50 (per tonne)? We know why — because they were trying to keep it secret until the election was over when they no longer need voters, but still need their money," Poilievre said.

McKenna criticized the Conservative as having no real plans of their own, likening Poilievre and Leader Andrew Scheer to Ontario Premier Doug Ford in that "they don't understand that we need to take action on climate change."

Liberal candidate and prominent environmentalist Steven Guilbeault — whom McKenna referenced in her remarks — also weighed in, writing on Twitter that walking back a pledge to cap the price at $50 per tonne was "a very good thing" and that the "price should reflect the cost of climate change to society."