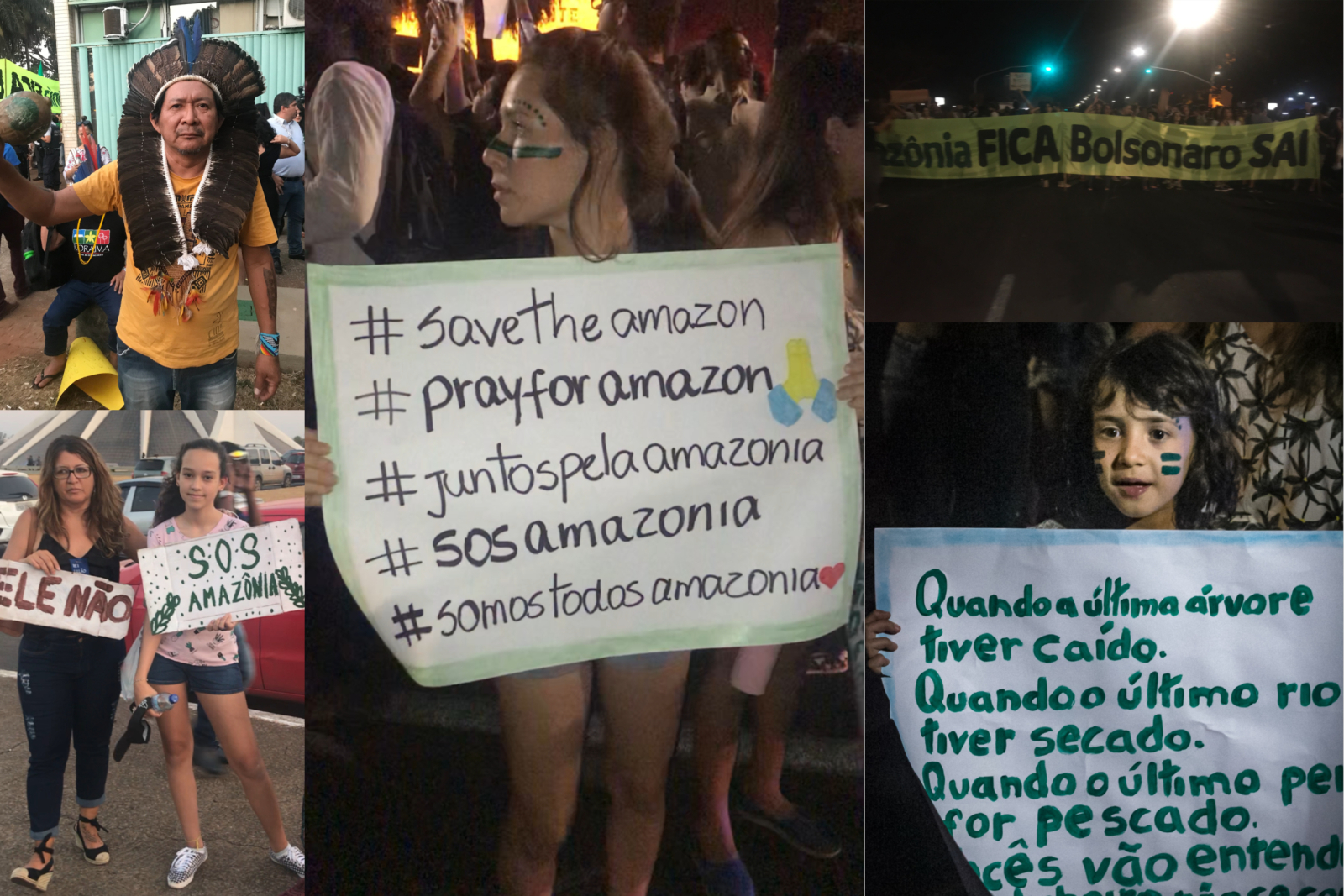 A swarm of people took over Brasilia on Aug. 23, 2019, protesting the Amazon fires. They were led by a giant banner that read “Amazônia fica, Bolsonaro sai.” Photos by Emilee Gilpin
Previous story
Next story

Last Friday, in the streets outside the government buildings in Brazil’s capital city, I walked with nearly a thousand people in desperate concern over the relentless and unprecedented burning of one of the most important ecosystems in the world.

A swarm of people took over Brasilia, protesting in Brazilian/carnival style, with more rhythm than any march I had been to before. People screamed, danced and sang, led by a giant banner that read “Amazônia fica, Bolsonaro sai” ("the Amazon stays, Bolsonaro goes").

But it wasn't a time to celebrate and the mood wasn’t entirely jovial. Protesters fired smoke bombs outside the Ministry of Environment, screaming “Sai Salles” (Get out Salles), referring to Ricardo Salles, Brazilian President Jair Bolsonaro’s environment minister.

The planet’s lungs are on fire, and the city was angry — angry that the great Amazon rainforest, one of the planet’s most biodiverse and ancient wildernesses, has been burning for weeks.

The president campaigned on pledges to stop the demarcation of Indigenous lands, sell off large parts of the Amazon rainforest to mining and agribusiness, discredit scientific data pointing to a drastic increase in deforestation in recent years and cut back on environmental protection and regulation measures. So far, he has kept those promises.

It’s not a new phenomenon for a Brazilian government to take a pro-industry stance — the country is, after all, the biggest exporter of beef in the world — but in recent memory, no other president has taken such bold measures against Indigenous rights and the environment.

The march in Brasilia was one of many pro-Amazon marches across Brazil and the world last week.

The world’s largest tropical rainforest, 10 times the size of Texas, the Amazon is vital to all living beings. It’s home to an incredibly diverse population of plants and trees, which convert carbon dioxide into 20 per cent of the world’s oxygen supply, and is the primary determinant of weather systems in Brazil and of rainfall around the world.

So when word got out that there has been an unprecedented number of forest fires in the Amazon — more than 70,000 in the whole country and nearly 40,000 in the Amazon, which is a 77 per cent increase from the same time period last year — the whole world turned its head toward Brazil.

When we looked, we saw that the majority of the fires had been started by farmers clearing land for agribusiness, emboldened by Bolsonaro’s ascent to power.

Immediately after his government took office, following a widely criticized anti-corruption crusade that sent the former left-wing president Luiz Inácio Lula da Silva to prison, Bolsonaro filed an executive order to transfer the regulation and creation of Indigenous lands to the agriculture ministry, which many in the country see as in the pocket of the agribusiness lobby.

It was a clear conflict of interest, which is why the move was stopped by Congress and the Supreme Court, but it sent a message that Indigenous rights stood in the way of industrial development.

In a tweet from Jan. 2, Bolsonaro spoke of “integrating” Indigenous people and people living in quilombos, reserves for descendants of enslaved people.

Brazil is home to approximately 900,000 Indigenous people from 305 tribes, most of whom live on reserves, according to Brazil’s Socio-Environmental Institute. More than 120 traditional territories claimed by Indigenous groups have not yet received government recognition.

Once in power, Bolsonaro’s government deposed of FUNAI’s president and put a federal police deputy in his place, Marcelo Xavier da Silva, a man with strong ties to agribusiness who once worked on a controversial congressional inquiry that attacked the very organization he was now charged with running.

In a June 20 tweet, Sônia Guajajara, Indigenous rights activist of the Articulation of Indigenous Peoples of Brazil, called Bolsonaro’s government the “worst government ever.”

Another Bolsonaro appointee, Health Minister Luiz Henrique Mandetta, suggested that there would be spending cuts in health care for Indigenous people.

“We have figures for the general public that are much below what is spent on health care for the Indigenous,” he said, in effect warning the Indigenous population that a dark future awaited them.

And then, this month, the fires seemed to fulfil that apocalyptic prophecy.

A thick blanket of black smoke descended on São Paulo — a city of more than 12 million people — last week, prompting people to share photos on Twitter. #PrayforAmazonia started to trend, and celebrities like Leonardo DiCaprio, Cristiano Ronaldo and Madonna shared photos on social media, urging a conversation that Indigenous people in Brazil, environmental conservationists and scientists had long been crying out for.

In a video recorded by Indigenous filmmaker Kamikia Kisedje, a group of Xingu people from the Kubenkokre village in the Brazilian Amazon say they will continue to resist destructive production and protect their way of life for their children and grandchildren.

“We say no to mining in our lands, no to deforestation,” O-É Kaiapo Paiakan said, standing in front of the community of Amazonian peoples. “No more invasions and disrespect. No more pesticides in our rivers and foods. No more criminal fires in the forest. We are with you, standing for the Amazon.”

On the ground, I’ve been hearing a lot of debate about what’s next for Brazil, the Amazon and the planet. While most people want to see the fires put out and agree that the environment is in a dire state, no one seems sure about the best way forward.

Is it safe to have the armed forces trekking through Indigenous lands?

Will the illegal activity be stopped in remote parts of the rainforest with weakened environmental policies?

Will anyone care the day after tomorrow?

If nothing else, the fires have shed light on the country’s ongoing political emergency.

​​​​Brazil’s National Institute for Space Research (INPE) has reported increased and concerning rates of deforestation in the Amazon, but the Bolsonaro administration has dismissed the findings. After INPE’s director, Ricardo Galvão, defended the data and provided more scientific evidence to back up the reports, he was dismissed from his role earlier this month.

In an interview with the BBC, Galvão said that previously, the INPE and the ministry formally collaborated to prevent deforestation in the Amazon from 2002 to 2014. But the current environment minister, Salles, has insisted that ideological biases guide scientific data and that deforestation statistics have been sensationalized. He has gone as far as to suggest hiring a foreign company to replace INPE, which Galvão said would amount to a conflict of interests.

On Monday, the G7 offered US$22 million in fire-fighting aid to Brazil. Bolsonaro called the move and further international criticism of his government an “echo of colonialism,” chastising countries with colonial histories and relationships for trying to play saviour to the Amazon, acting as if Brazil is a “no man’s land,” as Bolsonaro tweeted Monday.

While some may argue he has a point, many Brazilians heard only hypocrisy coming out of the mouth of a man bent on supporting industrial development at the risk of continuous violation of the rights of the country’s most exploited people and one of the planet’s most important ecosystems.

On the other hand, U.S. President Donald Trump, whose journey to presidency isn’t unlike Bolsonaro’s, tweeted his support for the president and the 43,000 armed forces that have recently been sent to fight the fires, while precious lives and lands remain on the line.