About 56,000 fish now upstream of landslide in B.C.'s Fraser River 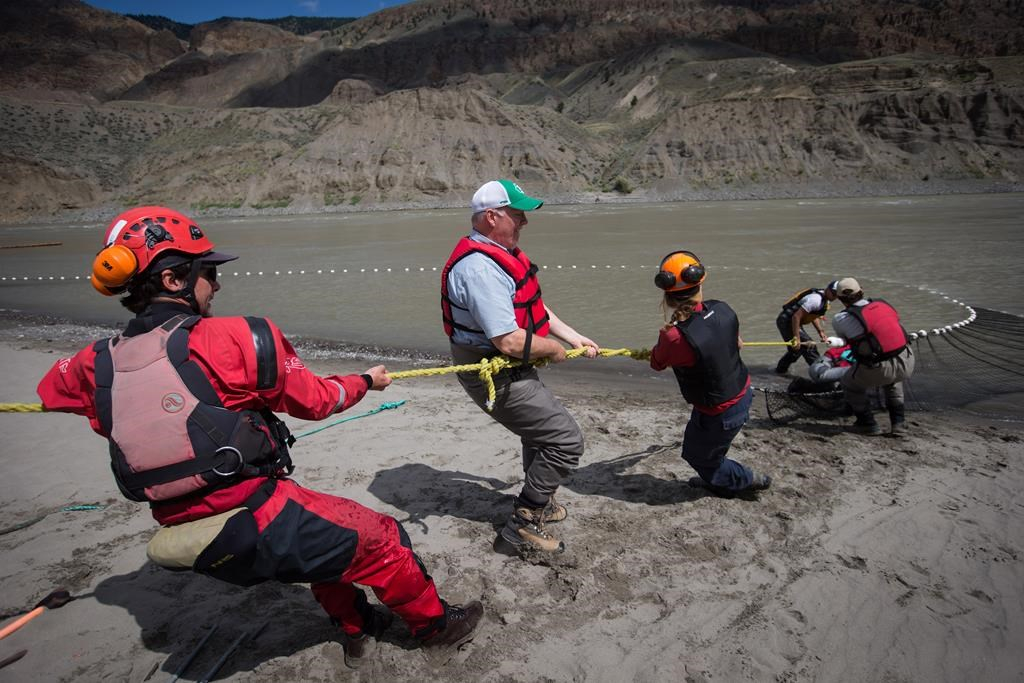 B.C. Premier John Horgan, second left, helps pull in a fishing net to catch salmon, to be transported up the Fraser River past a massive rock slide on the river near Big Bar, west of Clinton, B.C., on July 24, 2019. File photo by The Canadian Press
Previous story

About 56,000 fish have made it past a disastrous landslide in British Columbia's Fraser River as crews continue to work to clear debris and find other ways to transport salmon to their spawning grounds.

The slide near Big Bar in B.C.'s Interior was found in late June and federal, provincial and First Nations officials have been working to reduce the harm to the river's significant salmon runs, at a shared cost of $6 million so far.

Michael Crowe of the Department of Fisheries and Oceans says 12,000 salmon made it upstream through channels created by rock manipulation and blasting, while 44,000 have been transported by helicopter.

Crowe, who is the environmental unit leader for the slide response team, says the majority of the salmon moved by air are sockeye, while the remainder are chinook and only a handful are pink and coho.

He says muddy water and fish movement make it difficult to estimate how many salmon are trapped downstream from the slide, but government officials have previously said millions of sockeye and hundreds of thousands of chinook typically pass through the site.

However, the Department of Fisheries and Oceans says the sockeye run this year is extremely low, with only 628,000 expected to return compared with the pre-season median forecast of 4.8 million.

Crowe adds the work to clear rock is dynamic and crews are also installing a fish ladder and exploring opportunities to move salmon by truck following efforts to improve what was a "very rough road" in the remote area.

"Nothing is off the table unless it's determined as not being feasible. We are looking at any and all options," he told a conference call with reporters Wednesday.

Crews are radio-tagging fish regularly and so far, 276 sockeye, 162 chinook and five pink salmon have been tagged. While 17 radio-tagged chinook have made it through the slide on their own, no tagged sockeye have passed through, Crowe says.

He says the work to create channels is challenging because it's impossible to plan long-term as moving one rock could trigger other rocks to tumble and settle in an unexpected place.

The narrow opening at the slide site, the intensity of the water flow and weather conditions have all affected operations, says Kevin Skrepnek, the lead for the joint information centre that has been set up in Lillooet.

First Nations voices, perspectives and protocols have been embedded in the unified response to the landslide, says Dianne Garner, First Nations incident commander with the response team.

By The Canadian Press | News, Politics | August 27th 2019
State Of The Animal