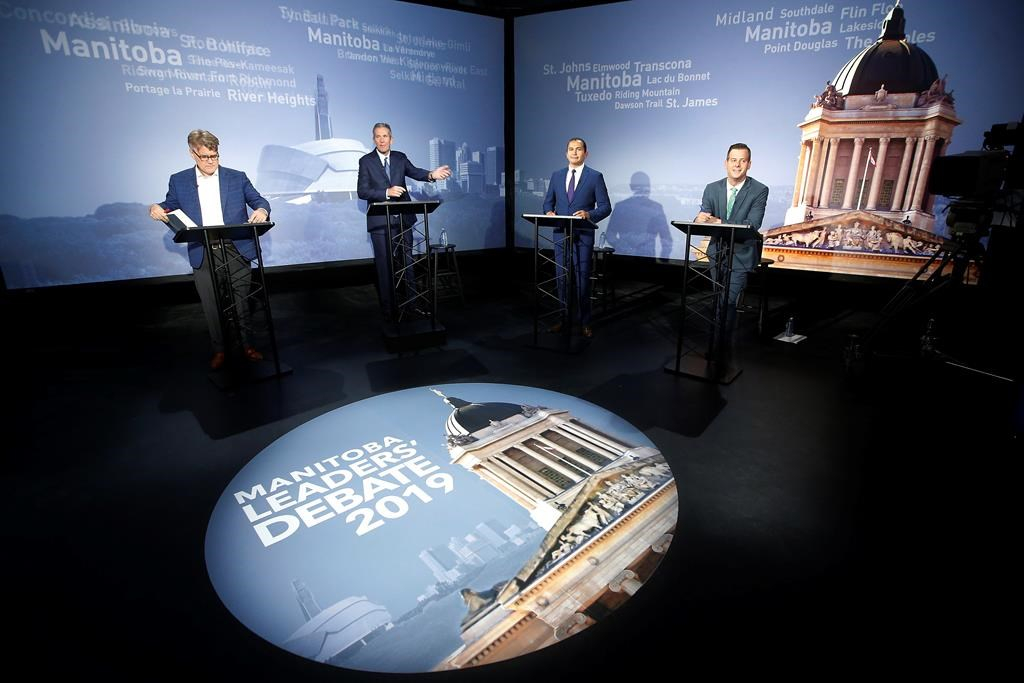 Dougald Lamont, left to right, Brian Pallister, Wab Kinew and James Beddome prepare for a leaders' debate at CBC in Winnipeg, on Aug. 28, 2019. Photo by The Canadian Press/John Woods
Previous story
Next story

Manitoba Progressive Conservative Leader Brian Pallister was the main target Wednesday night as the leaders of the province's four main political parties squared off in a 50-minute televised debate that occasionally devolved into noisy cross-talk.

Pallister, ahead in opinion polls and having fulfilled a key promise to reduce the provincial sales tax, focused on taxes and large deficits under the previous NDP government as he made his pitch for a second mandate.

He acknowledged some of the controversy around his health reforms, intended to concentrate services and reduce wait times. The changes — including downgrading three hospital emergency departments — have been opposed by unions and have hit bumps in the road.

"I have tremendous respect for the people who work in our health-care system and I want them to understand and know that better care, sooner is the goal and it's worth the struggle to get there," Pallister said.

NDP Leader Wab Kinew tried to keep the focus on health care, even pivoting to it at one point when asked a question about the economy.

"This election is about health care. Over and over again, I've heard from many, many people in Manitoba that they're concerned about ... the cuts to services."

Lamont, one of four Liberals in the legislature, also went after Kinew and accused him of being almost as fiscally conservative as Pallister.

"Your platform has $200 million in cuts in the first four years," Lamont said to Kinew.

There were no knockout punches in the debate, and the leaders largely stuck to their talking points in the time allotted. Pallister, who has occasionally run into trouble for speaking off the cuff, appeared unfazed by his opponents' attacks.

Pallister delivered the only surprise of the night. He said his government is on track to balance the budget by 2022 — two years earlier than he initially promised in 2016.

"We have worked very, very hard," Pallister told reporters after the debate.

Green Party Leader James Beddome asked Pallister to commit to a guaranteed basic income to cut poverty and ended by asking viewers to give his party a first-ever seat in the legislature.

The debate is, so far, the only one scheduled to feature all major party leaders in the run-up to the Sept. 10 election day.