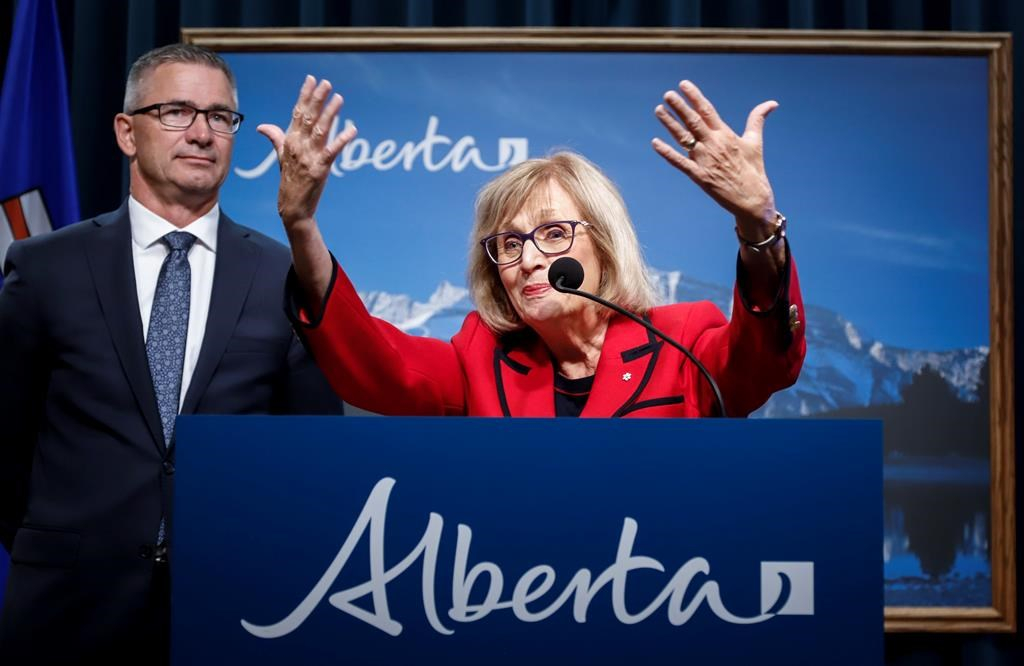 A panel looking into Alberta's finances says the province habitually overspends on its services and needs to get tough on schools, have university students pay more and force doctors to charge less.

The panel, chaired by former Saskatchewan finance minister Janice MacKinnon, says in a report that Alberta's annual expenditures would be $10.4 billion less if the province were to spend the same per person as do British Columbia, Ontario and Quebec.

It says that if Alberta matched the other provinces, it would have a $3.7-billion surplus this year instead of a $6.7-billion deficit.

Alberta's spending per capita is the highest in Canada, the report adds. And its debt is on track to reach $100 billion in four years.

To balance the budget by 2022-23, as the United Conservative government has promised, the panel suggests there be no increases in government spending for four years and a reduction in operating costs by at least $600 million, as well as cuts in capital spending.

"Raising taxes is not the answer. Alberta has a spending problem and the government needs to act quickly and decisively to reduce its spending," MacKinnon told reporters at a news conference Tuesday.

"The province needs to go beyond merely cutting spending to transform the way services and programs are delivered."

Premier Jason Kenney ordered the report shortly after his United Conservatives were elected in April.

"We must act now," said Alberta Finance Minister Travis Toews. "Future generations and Albertans today are counting on us to make the decisions that will put us back on a solid fiscal path."

Among the report's 26 recommendations are sweeping reviews of health care and education.

The report recommends making greater use of private or not-for-profit clinics to deliver health services that don't need to be done in hospitals. It suggests limiting the costs doctors charge for services and using legislation if new fees can't be negotiated.

The report calls for cuts to administration costs in education and funding incentives for school boards based on better educational outcomes.

It recommends ending a tuition freeze for post-secondary students and suggests "the government should move quickly to address the future of those post-secondary institutions that do not appear to be viable in future funding scenarios."

When it comes to public-sector bargaining, the report says there needs to be salary restraint across government and legislation should be used to set wage levels.

"What we learned today is it's going to hurt — that health-care services are going to be reduced and many of us are going to be paying out of pocket for things that we need," said Shannon Phillips with the Opposition NDP.

Phillips said it's an approach that is going to be viewed as aggressive by physicians, teachers and public-sector employees.

"Essentially to go to war with doctors and I don't think that will be productive at all. And there's further indications that they want to go to war with the public sector, which is going to be tremendously expensive," she said.

An official with the Alberta Medical Association said the group is reviewing the report and declined comment.

Toews said nothing is written in stone yet regarding labour negotiations.

"We wanted to ensure that we were well informed before we continued with labour discussions with the public sector," he said.

The president of the Alberta Teachers Association called the document a recipe for more uncertainty and instability in the province's education system.

"(The report's) recommendations for performance-based incentive systems for funding schools do not have any basis," said Jason Schilling. "Such systems have proven to be unsuccessful and generally result in less funding for schools and fewer supports for students who have greater needs."

The head of the Alberta Federation of Labour called it an attack on public services, children's education and jeopardizes the future of all working Albertans.

"The MacKinnon report is a prescription for disaster and will not lead Alberta to prosperity," said president Gil McGowan.

"If these recommendations are put into place, they will make Alberta's economy sicker."

Ron Kneebone, an economics professor at the University of Calgary, said there are no real surprises in the report.

"It's just confirming the general direction that the government ran its election campaign," he said.

"It didn't seem to be any big hurry ... They're still talking about balancing the budget by 2023."