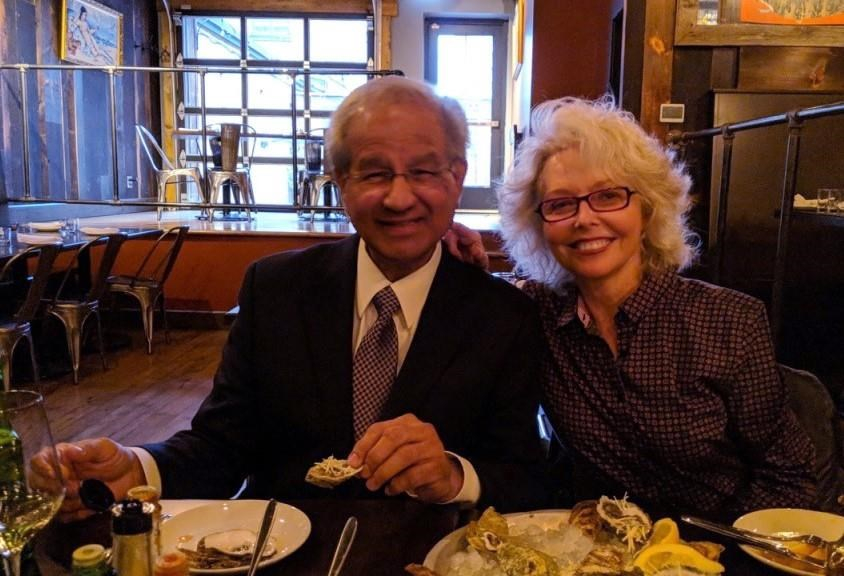 Sharyn Laughlin and Denis Dudley, an Ottawa couple who were trapped in the Bahamas as Hurricane Dorian struck, are shown in a handout photo. Handout photo by Kristin Dudley
Previous story
Next story

An Ottawa couple and their friends remained unaccounted for on Tuesday after being trapped in a northern Bahamas home Sunday when Hurricane Dorian battered the region as a massive Category 5 storm, the couple's daughter said.

Kristin Dudley last spoke to her parents, Sharyn Laughlin and Denis Dudley, at about 4 p.m. on Sunday as they and two of their friends retreated to the attic of their house on Great Abaco Island in the northern Bahamas.

Dudley, who lives near Montreal, said her father said water had already washed away the main floor of the house, blowing out windows and doors. A part of the roof had been destroyed, she said.

"They were taking refuge in an attic, waiting out the second part of the storm because most of the house had been destroyed by water," she said in a phone interview.

Dudley said her 70-year-old parents seemed to be handling the situation well, but she's unsure whether the two Ottawa-area couples had time to gather supplies and her father's diabetes medication.

"They sounded good, they were prepared to go through the second part of the storm," she said. "I don't think they knew the extent of what was happening."

As for the home that the family has owned for 20 years, she says it has been damaged beyond repair.

"You'd have to take it down and rebuild," she said. "Saltwater destroys everything."

The storm caused widespread devastation across the northern Bahamas on Sunday and Monday, as sustained winds of 295 kilometres per hour ripped off roofs, bowled over cars and sent floodwaters rushing into people's homes. At least five deaths were reported in the Bahamas as of Tuesday morning, as the storm continued to pound the region with high winds and torrential rain.

The Canadian government has issued a travel advisory warning against all travel to the Bahamas as well as parts of Florida, Georgia and South Carolina.

With phone lines down across the island and road access still blocked, Dudley said she has no choice but to be patient as she waits for news.

She's been calling officials and aid organizations to offer the GPS location of her parents' whereabouts and co-ordinating on Facebook with locals on the ground.

Dudley said the hundreds of messages of support she's received from the public each day have helped her keep going as she struggles to maintain a semblance of normalcy for the sake of her two children.

"It's nice see that people are praying for their safe return," she said.

She said her family has started a GoFundMe page to help with disaster relief in the Treasure Cay and Abaco islands area that her family considers a second home.

If they raise enough money, she said, they'll consider chartering a helicopter to deliver fuel, drinking water and food to the local community centre, which is acting as a shelter.