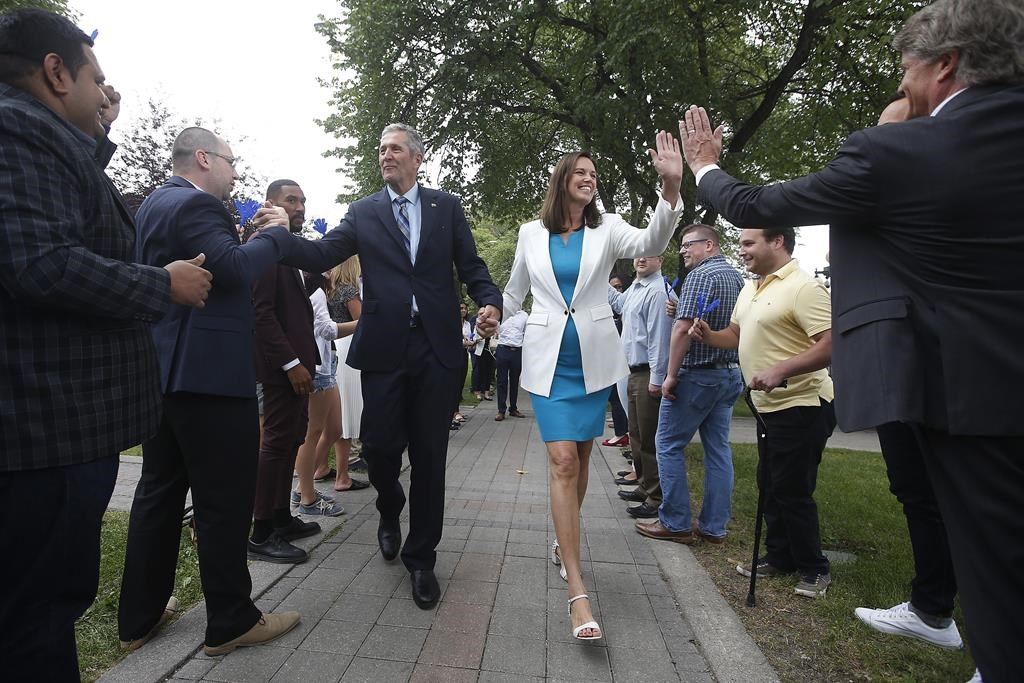 Manitoba Premier Brian Pallister and his wife Esther walk through supporters as he heads to announce that the writ has been dropped and he is calling a September election in Winnipeg on Aug. 12, 2019. File photo by The Canadian Press/John Woods
Previous story

Manitoba's political parties are using their platforms, candidates and advertisements to reach out to women voters who some analysts say could play a deciding role in important constituencies in Tuesday's election.

The Progressive Conservatives have ads about Brian Pallister's humble roots and family life, a possible attempt to soften a leader whose approval rating remains low with women. His wife, Esther, has also appeared by his side at many campaign events.

The party has tried to highlight NDP Leader Wab Kinew's past misogynistic rap lyrics and social media posts. Attack ads have pointed to domestic violence allegations made by Kinew's former partner. He has denied them.

Despite the Tories' efforts, Kinew has continued to poll more favourably with women.

The New Democrats have rolled out a campaign about their leader's redemption — how he has become a supportive family man, husband and father. They've also used attack ads with women, who appear to refer to Pallister as an "ass."

"In some ways, this election has really been subtly and really overtly about women," says Mary Agnes Welch with Probe Research.

Welch says men tend to vote the same way every election but women are more likely to support different parties. Getting the female vote doesn't guarantee a win, she adds, but it can swing key seats — specifically suburbs — and affect whether a minority or majority government takes office.

"How women vote in those key ridings in this election could be the deciding factor because they are the ones that shift."

A Probe Research poll released earlier in the week showed the Progressive Conservatives had a significant advantage among male voters, but only a slight edge among women.

A different poll by Mainstreet Research on Friday had the two parties neck and neck with female voters.

Traditionally, women have leaned towards the New Democrats, Welch says. Under former premier Gary Doer, the NDP gathered and retained the female vote, particularly in the suburbs.

But when Greg Selinger stepped into the job, women voters dropped away.

"How important is that women's vote? My contention has always been that it is, in many ways, more fluid than men," Welch says.

Christopher Adams, a political analyst with the University of Manitoba, says women watched as key female NDP politicians walked away and the party raised the provincial sales tax.

In the 2016 election, Adams says, more women voted Progressive Conservative and many didn't vote at all.

"A lot of the middle-class women moved over to Brian Pallister, not because they were attracted to his policies, but just that they were tired of the NDP."

Key for the Tories is to retain those votes and, therefore, the suburban ridings they secured in the last election, Adams says.

Polls have shown health care is the largest issue for Manitobans, and specifically for women.

Pallister has been criticized for his government's health-care overhaul that has some emergency rooms in Winnipeg and most of the province's quick-care clinics. Adams says that's why significant health promises, including one to inject an extra $2 billion in the health budget, have been repeated.

The New Democrats have focused their campaign on health. They are promising to hire and train more nurses and reopen two Winnipeg emergency rooms.

Adams says that's helped bring back some women to the NDP, but it may not be enough to flip any constituencies.