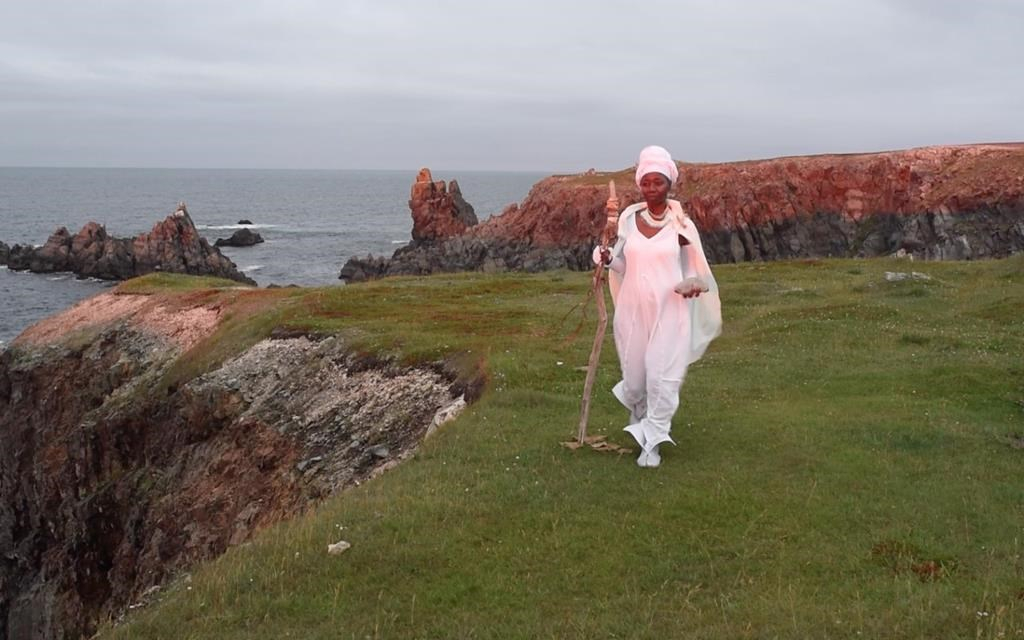 Turner is seen in an undated still image taken from a video installation, in Bonavista, Newfoundland and Labrador. Handout photo by Camille Turner
Previous story

An art installation at this year's Bonavista Biennale is shining a light on a dark corner of Newfoundland's history — slave ships that were built on the island during the 1700s.

Camille Turner, a Toronto-based artist and academic, was intrigued when she heard the largely untold story of Newfoundland-built slave ships, and she was surprised to find so many ships documented in a database of expeditions.

Her installation laid out in the historic saltbox Mockbeggar Plantation Fish Store in Bonavista, N.L., includes a display of 19 cards, each commemorating a slave ship built in Newfoundland.

"I didn't expect to see this at all," Turner said of the number of ships. "That was really quite something."

Turner's travelling Afronautic Research Lab, on display until Sept. 15., functions as a reading room on Canada's links to slavery, displaying records such as newspaper clippings from Canadian slave owners who were hunting down runaway people.

The research lab has visited cities across the country, and Turner said each place adds another element to the narrative. On its second stop in Newfoundland, she decided the ships would be her way into the story.

Each ship has a unique tale of its own. One involves free Africans liberating the kidnapped people, another is recorded as sailing with mostly children on board. Turner drew her work from a Harvard University database which compiles records of slaving expeditions between 1514 and 1866.

Information on the expeditions varies, but crucially missing are identifying details about the trafficked people and their lives.

"Sometimes it has how much money they made selling these people, but it doesn't have any single name of any of the people that were part of this trade," Turner said in a recent phone interview from Los Angeles. "They weren't really mentioned as people but as cargo."

Turner's installation also includes a video, filmed at the venue and in Bonavista's rugged Dungeon Provincial Park, showing her interact with artifacts. The dimly lit room where the installation is displayed gives visual context to the stories.

Visitors are often surprised by what they discover. Turner said people can spend a long time going through the material and taking notes on the unknown chapters of their local history.

The stories Turner showcases would be nearly impossible to research with the province's own records, she said, as Memorial University's database does not extend far enough back. Many of the documents came from British shipping records.

Turner's aim is to bring these hidden stories to the forefront and map the global connections of the inhumane practice.

In her Bonavista installation, a heavy stone sits in the middle of the floor. The accompanying video shows Turner carrying it into the space. It represents the stone ballasts that ships left behind on the African continent once their weight was replaced with stolen people.

"I use the stone as a symbol to talk about the missing people," Turner said.

Stones and ships aren't the only symbols of Newfoundland's involvement in the slave economy.

And elsewhere in Atlantic Canada, research is also pointing to the slave economy's powerful role in the region's history and development.

A report from Dalhousie University released last week details the racist and pro-slavery sentiments of the university's founder and a number of past presidents. It also traced the presence of enslaved black people in the region and discussed how taxes on trade with the slave economy supported Nova Scotia's public funds in the 1800s.

For her part, Turner said she hopes her exhibit keeps travelling the country to keep the narrative expanding, revealing hidden truths about familiar places.

By The Canadian Press in News, Politics | September 7th 2019

By Michael MacDonald in News, US News, Culture | February 26th 2017