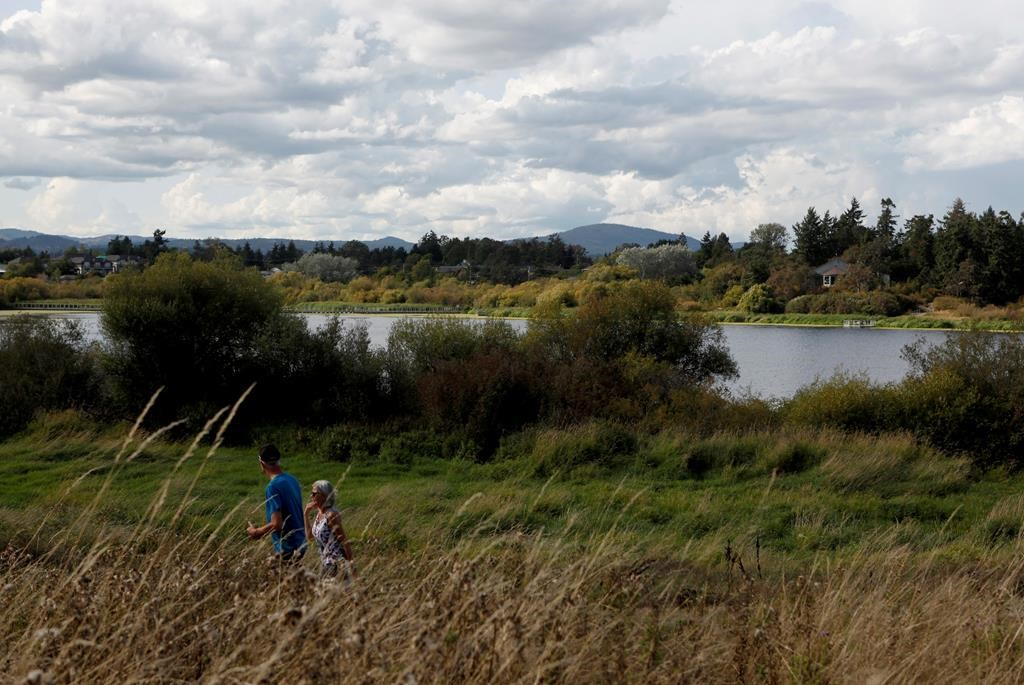 The bird watchers gather in the parking lot at the Swan Lake Christmas Hill Nature Sanctuary, binoculars and cameras at their sides, chattering about their most recent siting of a tiny wren or a noisy warbler.

It's a loosely knit group of die-hard locals and visitors from across Canada who will wander the trails of a wild West Coast oasis located in the heart of Greater Victoria's urban landscape.

Take one or two steps onto a Swan Lake trail, amid the Garry Oak forest, the marshy lakeside bull rushes and the cries of an Osprey circling the water, and the noise of nearby traffic-snarled highway melts away.

"This is the unorganized bird watch group," says Michael Webb to the dozen people who have arrived to participate in the sanctuary's twice-weekly free bird watch tours. "We haven't had a leader for a year, but we want to make sure nobody gets lost. This is a lovely little refuge in all of the noise."

Once the home of sheep pastures, vegetable farms and a lakeside hotel dating back to the mid 1800s, Swan Lake officially became a nature sanctuary society in 1975 as local politicians, naturalists and area schools and post-secondary institutions joined forces to protect the 65-hectare area from development.

It is managed by the non-profit sanctuary society.

Swan Lake Christmas Hill Nature Sanctuary does not bill itself as a tourism destination hot spot, but it's a scenic, restful and largely untouched area for those needing to press the pause button without travelling long distances or spending large amounts of money, says Kathleen Burton, Swan Lake's executive director.

"Literally, this is a gem in the heart of the city," says Burton, sitting on a wood bench overlooking the lake. "You just take a deep breath and you can release a lot of the tension of travelling and daily anxieties."

The sanctuary comprises two physically and ecologically distinct areas, including the low wetland surrounding Swan Lake and the rocky, oak forest hilltop of Christmas Hill. The area was shaped by the last glacial period which formed Christmas Hill and the deep clay beds under Swan Lake.

There are up to four dozen native flower and plant species, including Nootka rose hip, western buttercup, pink fawn lily and red columbine at the sanctuary and more than 180 bird species. Red-winged blackbirds can be seen perched on bull rushes at the water's edge while hawks and eagles hover high above the lake.

Night-vision cameras stationed in the forest reveal bears, raccoons and deer meandering through the bush and foraging for food. The video images are shown inside the sanctuary's Nature House, which also includes a gift shop, classroom space and displays of animals and plants found in the area.

"There's cool stuff that happens here," says Burton, recalling watching a pair of squirrels sending out furious vocal warnings of a Barred owl about to launch its evening hunt over the forest and lake shore.

Bird watcher Norma Smith says she's a sanctuary regular. Smith, who says she also acts as an unofficial guide, packs binoculars and a camera and her mobile phone includes recordings of bird calls to help her identify the many different ones she's seen at Swan Lake.

She says she feels blessed to have a largely untouched refuge to visit within the urban boundary.

"Just walking among the trees and nature is relaxing and good for your soul," she says.

If you go: The grounds, nature trails and parking lot are all open dawn to dusk every day at 3873 Swan Lake Rd, Saanich. Admission is by donation. The Nature House is open year round, except for statutory holidays.