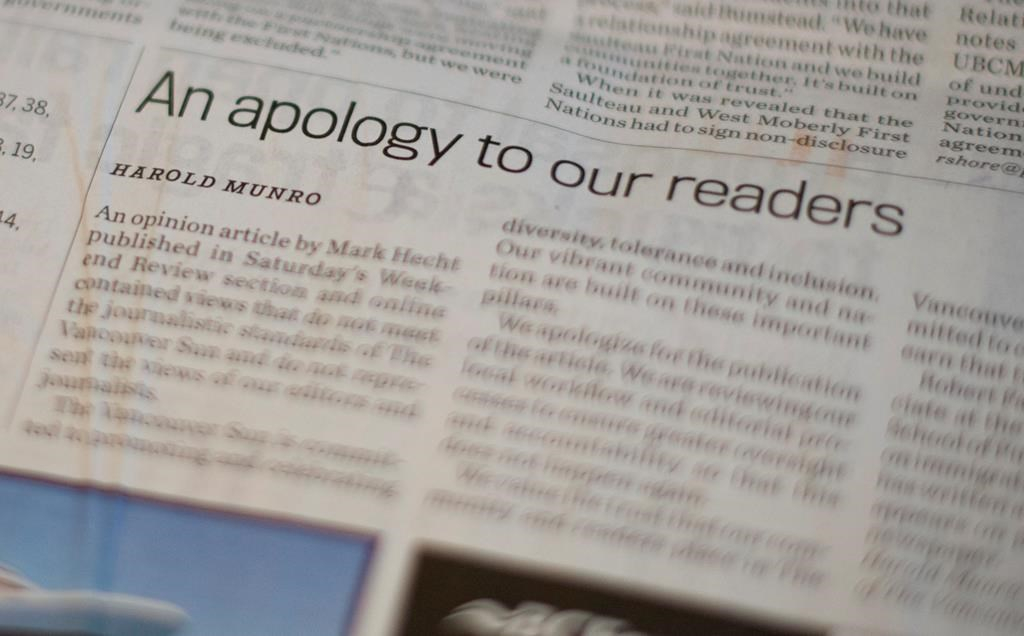 An Apology to its readers is seen in the Vancouver Sun Vancouver, on Monday, September, 9, 2019. File photo by The Canadian Press/Jonathan Hayward
Previous story
Next story

A journalism professor says the controversy over an anti-diversity opinion piece published in — and then pulled online from — the Vancouver Sun has nothing to do with freedom of expression.

"We're not common carriers. We're not the telephone system."

Mark Hecht, an instructor of geography at Mount Royal, argued in the column that showed on the weekend that more diversity means less social trust. He commended Denmark for becoming more restrictive toward immigrants.

"Can Canada learn from Denmark? The jury is out," Hecht wrote. "But the minimum requirement is that we say goodbye to diversity, tolerance and inclusion if we wish to be a society that can rebuild the trust we used to have in one another and start accepting a new norm for immigration policy — compatibility, cohesion and social trust."

The piece was removed from the paper's website on Saturday, but not before it went to the printing press.

"I am dismayed by the suppression of open and rational debate in this country," Hecht wrote in an email Monday.

Holman said he and many of his colleagues were troubled by the piece. Several Vancouver Sun journalists also denounced it on social media.

Holman said newspapers have no obligation to run op-eds — columns submitted by people unaffiliated with the paper — that don't pass journalistic muster.

He said one major red flag in Hecht's piece was that it cites the Gatestone Institute, a think tank that has been widely criticized for spreading anti-Muslim misinformation.

The op-ed may help fuel anti-immigrant sentiment in Canada, he suggested.

"The Vancouver Sun should not have published this op-ed. It does not meet our standard of helping facilitate the kind of rational, empathetic, informed decision-making expected of us in a democracy."

The Sun's editor-in-chief, Harold Munro, apologized for the piece he said did not meet the paper's journalistic standards.

"The Vancouver Sun is committed to promoting and celebrating diversity, tolerance and inclusion. Our vibrant community and nation are built on these important pillars," Munro wrote.

"We are reviewing our local workflow and editorial processes to ensure greater oversight and accountability so that this does not happen again."

He has a self-published book called "The Rules of Invasion: Why Europeans Naturally Invaded the New World."

Neither Hecht nor Mount Royal indicated whether he still has his job at the university.

"Mount Royal, like all universities, is a place for debate, for freedom of expression and for the respectful exchange of ideas," Jonathan Withey, dean of the faculty of science and technology, said in an e-mailed statement.

"The ideas expressed in this newspaper op-ed, while protected by freedom of expression, do not represent my personal views, nor the position of Mount Royal University as a whole."

The press secretary for Alberta's Advanced Education Ministry said the provincial government would not tell Mount Royal what to do.

"Freedom of expression, within the limits of the law, on Alberta's campuses is at the heart of the academic experience and is integral to Alberta's adult learning system," Laurie Chandler said in an email.

"Universities have the sole discretion on the employment of professors and instructors."