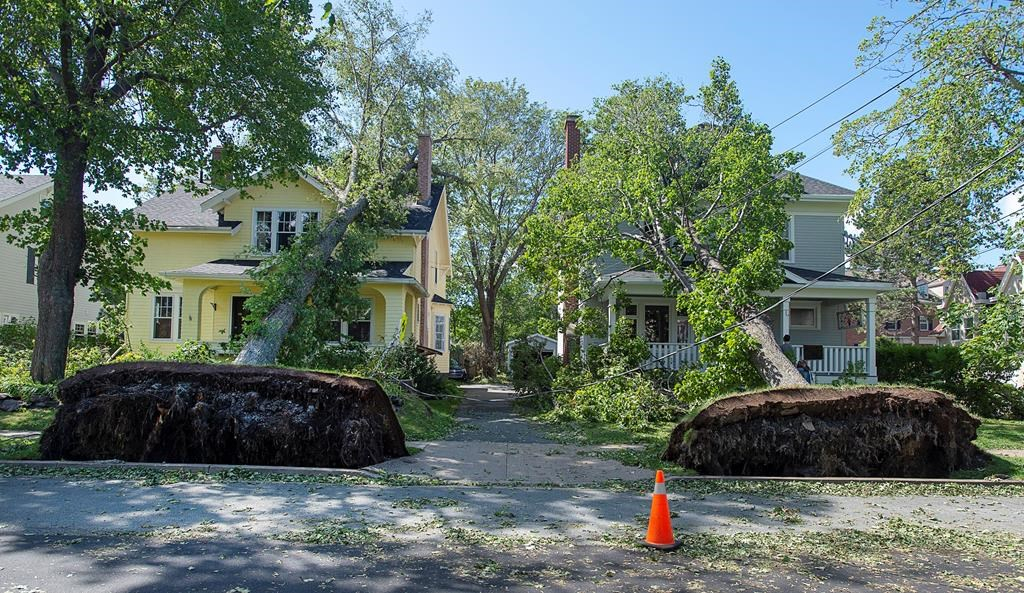 Prime Minister Justin Trudeau and two federal cabinet ministers offered support Tuesday to people still coping with the impact of Dorian, the hurricane-strength post-tropical storm that slammed into the Maritimes on the weekend.

The prime minister said the federal government has closely monitored the storm's impact throughout the region.

"I'm here today to thank the first responders and all the people who've been working very, very hard on something that has been an ongoing effort over the past few days," he told reporters.

"I know crews have been working around the clock to restore power throughout Nova Scotia, and there's a lot more work to do, and the federal government is here to support in any way we can."

Goodale and Sajjan later visited Herring Cove, N.S., a coastal community south of Halifax near where Dorian made landfall on Saturday night.

As the storm approached the coastline, it lashed the area with driving rain and gusts reaching almost 150 kilometres per hour — approaching the power of a Category 2 hurricane.

There have been no reported injuries, but roofs were torn off and trees were snapped like twigs, pulling down power lines across a wide swath of the Maritimes.

At one point, more than 500,000 electricity consumers in the region were without power, representing 80 per cent of the homes and businesses in Nova Scotia and 75 per cent in Prince Edward Island.

In New Brunswick, about 80,000 homes and businesses — 20 per cent of NB Power's customers — were left in the dark at the height of the storm.

As the recovery effort entered Day 3, those numbers have dropped considerably. However, more than 100,000 Nova Scotia Power customers were still without electricity Tuesday morning, and the company said it would be Thursday before everyone is reconnected.

The company says it has found about 3,700 trees on power lines that stretch across 32,000 kilometres, and repairs are being made to 300 broken or leaning utility poles.

As well, about 4,500 outages across Nova Scotia represent individual customers, which means one repair will bring electricity back to only one customer.

"I think it's fair (to say) that all Nova Scotians have not seen a weather event like this for quite some time. The physical infrastructure damage from one end of the province to the other is unprecedented," McNeil said. "Everyone is working to best ability to restore that power as quickly as possible, to restore telecommunications as quickly possible."

The premier assured that a post-mortem would be conducted to see what went right with the storm response and what went wrong.

He said he understands the frustration of those still waiting for power to be restored. Nova Scotia Power CEO Karen Hutt said she hopes the number of customers still without power would be cut in half by Wednesday and eliminated by Thursday.

A Canadian Forces representative said troops have accomplished tasks in the greater Halifax area and will now extend their mission to elsewhere in the province.

Capt. Guillaume Lafrance, chief of staff, Joint Task Force Atlantic, said the 380 assigned troops will be augmented by 70 reservists from Nova Scotia, bringing the total number of troops to 450.

"Our next objective is to really spread throughout Nova Scotia to help out the entirety of the province," he said.

Light armoured vehicles were spotted patrolling the streets as soldiers with chainsaws were ready to clear the streets of fallen trees. However, they were prevented from removing some trees because limbs were still tangled in power lines, which meant an electrician was needed to ensure safety.

Power crews from Quebec, Ontario, Florida and Maine have been called in to help.

In Halifax, experts were brought in to see how a crane that toppled at the height of the storm could be taken down safely.

Many schools across Nova Scotia and Prince Edward Island were closed Monday, and emergency officials have been urging people to stay home for their own safety and to give cleanup crews the room they need to work.