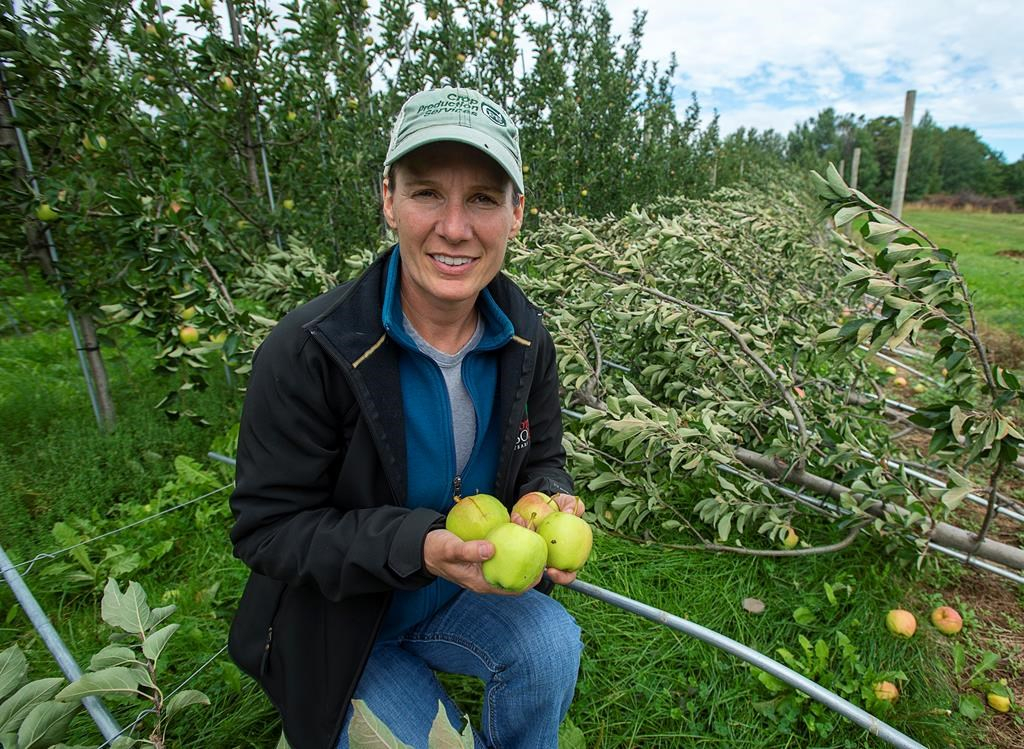 "We've lost a major part of our crop here, and some will be downgraded as well," said Larry Lutz, an apple grower and president of the Nova Scotia Fruit Growers' Association.

Last weekend, Dorian's hurricane-force winds snapped thousands of trees and pulled tonnes of fruit to the ground across the valley. The 120-kilometre strip of land between two low-slung mountains is renowned for a warm microclimate that supports the province's most productive farms and vineyards.

At the Lutz Family Farm in Rockland, up to 40 per cent of the gross value of this season's apple crop has been lost, Lutz said.

And the timing couldn't have been worse for the province's highest-value apples: the wildly popular Honeycrisp variety.

"They don't hang on the tree all that well — they have a short, brittle stem," said Lutz. "When the wind whipped them around, we probably lost at least 25 per cent .... Anything that happens to Honeycrisp has a huge impact on us."

The decision to shift to the Honeycrisp variety in the late 1990s rejuvenated an industry that is now seen as a viable option for younger farmers and their families.

As for Lutz's SweeTango apples, the plan was to begin picking them last Monday. Now, more than half are on the ground, rotting.

"They just shattered off the trees," he said. The more traditional McIntosh and Cortland apples fared better, thanks to their more flexible stems, but the wind also took a toll on them.

"Some of the apples are smaller, but they're prone to friction marks, especially the light-skinned varieties," said Lutz.

At Lisa Jenereaux's mixed farm near Melvern Square, up to 50 per cent of the Honeycrisp apples have been lost.

"We were just days away from starting to pick (other apples)," said in an interview. "This was one of the biggest crops, potentially, that we were ever going to have."

And it wasn't until a few days after the storm that Jenereaux realized several rows of trees, supported by a sturdy trellis system, were dying because they had been snapped off near the roots.

"We lost a couple acres of trees and trellis that just blew over, snapping off every tree going down the row," said Jenereaux, president of the International Fruit Tree Association and co-owner of Spurr Brothers Farms Ltd.

The loss of 4,000 trees will hurt the farm for at least the next four years because it takes that long to get new trees into production.

"You've lost a lot when you lose a tree — that's the hardest loss" she said, adding that crop insurance will help cover some of the damage.

Dorian also knocked out power to the farm on the weekend. The busy operation, which harvests 40 hectares of orchards and 300 hectares of vegetables and grain crops, wasn't reconnected until Thursday.

Jenereaux said Dorian's arrival on the weekend was particularly unwelcome because most orchards in the valley were devastated by severe frost in June 2018 — the worst seen in several decades.

"It's been challenging on all fronts," she said.

Provincial Agriculture Minister Keith Colwell said it was too soon to talk about compensation, though he noted the damage to orchards was significant.

"From the photos I've seen, it's massive," he said, adding that the apple industry tends to have a high level of crop insurance. "The orchards typically haven't seen this kind of damage in a very long time."

— With files from Michael Tutton