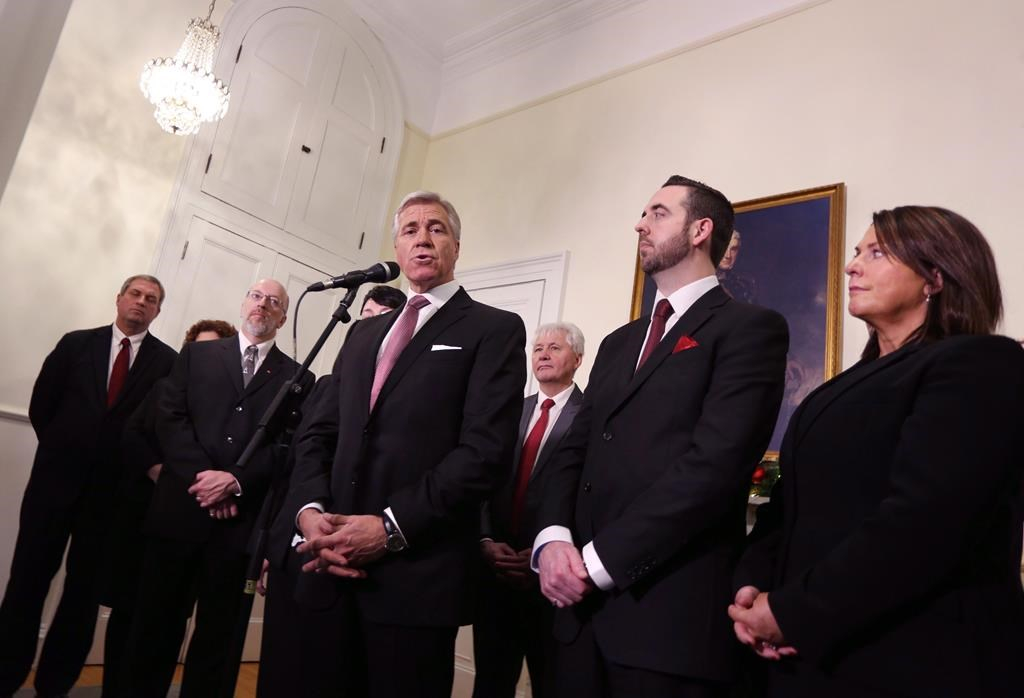 Newfoundland and Labrador Premier Dwight Ball, joined by members of his cabinet speaks with the media after being sworn in as the province's 13th premier at Government House, in St. John's, N.L., on Dec. 14, 2015. File photo by The Canadian Press
Previous story
Next story

A provincial cabinet minister in Newfoundland and Labrador has resigned for making comments deemed racist by one of the province's largest Indigenous groups.

Perry Trimper issued a statement Friday acknowledging the hurt caused by his statements and saying he is stepping down as environment minister, effective immediately. Liberal Premier Dwight Ball accepted his resignation.

Trimper had apologized to the Innu of Labrador on Thursday after the group released an audio recording in which Trimper is heard saying the Innu are prone to playing "the race card."

The recording starts with a low-key voicemail message from Trimper to an Innu Nation staff member about vehicle registration, but it continues to pick up a conversation Trimper has with someone after he fails to hang up his phone.

Ball said in a statement that Trimper will focus on rebuilding relationships with the Innu from outside cabinet, a process that will include cultural sensitivity training.

"While my words do not represent my values, I recognize that they were insensitive," Trimper said in a statement. "Understanding and sensitivity are critical to relationship building, and I welcome all opportunities for healing, which includes the process of reconciliation."

Trimper initially issued an apology to the grand chief of the Innu Nation, Greg Rich, and his executive assistant Dominic Rich, who received the message.

"I regret that I said these words," Trimper told St. John's radio station VOCM. "I need to apologize and I want to apologize .... Those words don't reflect me. I drifted away from the person I aspired to be."

The politician, who represents a riding in central Labrador, said he has worked with the Innu people for many years, even before he entered politics.

He said he was aware that some within the community are not satisfied with the services they are receiving, but he made it clear his comments were inappropriate and he denied being a racist.

"I'm mad at myself," he told VOCM, adding that he would work to regain the trust of his constituents. "My career has been devoted to Labrador and so much of it to the Innu."

"My government values the relationship with the Innu Nation and holds the Innu Nation in the highest respect," the premier said, adding that he is trying to set up a meeting with the grand chief.

Former deputy grand chief Peter Penashue responded to Trimper's comments on Twitter, saying it was a case of racial profiling.

"Here is the question I ask myself: Is this the attitude of government ministers when Indigenous peoples are not in the room?" he wrote.

In the first part of the voicemail, Trimper's comments appear to deal with an Innu request for additional translation services for residents seeking motor vehicle registration.

A person speaking with Trimper responds: "You can't have it all in every language .... They have a feeling of entitlement."

Trimper then adds: "And the race card comes up all of the time .... I've been working 30 years with you guys, don't play that on me."

Trimper, a former environmental scientist who had been house Speaker, was sworn into cabinet on Sept. 6.

Representatives from the Innu Nation could not immediately be reached for comment.

The group represents about 2,200 people in Labrador, most of whom live in the communities of Sheshatshiu in central Labrador and Natuashish, which is on Labrador's northern coast.

The politician's plague - opening mouth before engaging the brain - or shutting down the phone!