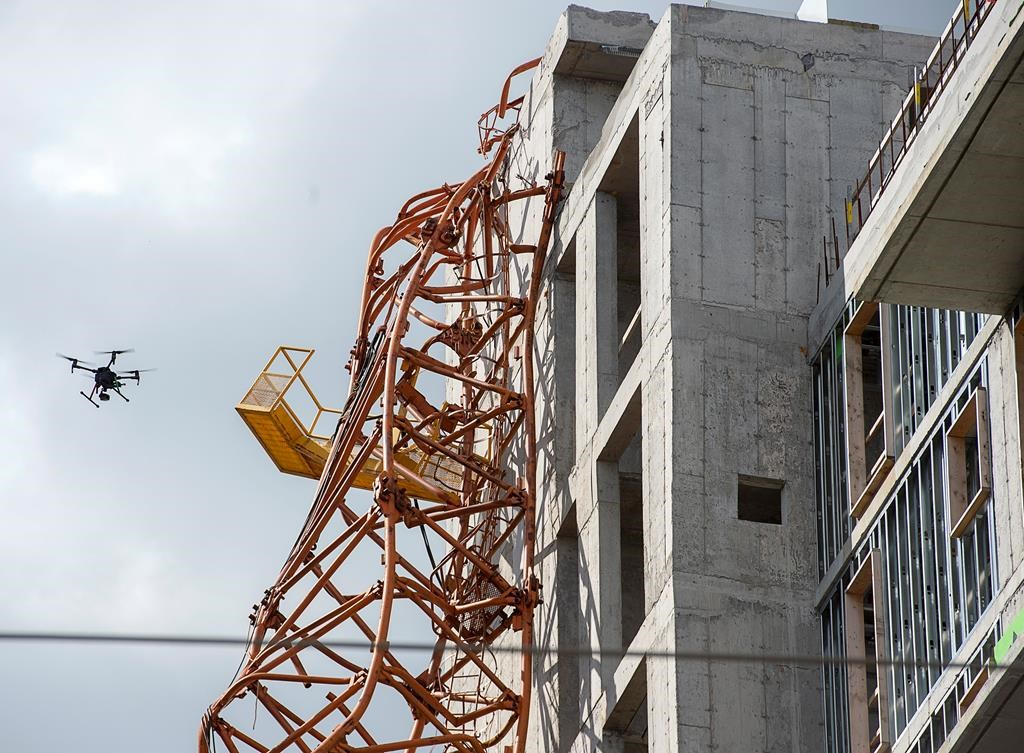 A drone flown by Halifax Regional Fire and Emergency records the damaged crane as they investigate potential fire hazards in Halifax on Friday, Sept. 13, 2019. Photo by The Canadian Press/Andrew Vaughan
Previous story
Next story

Nova Scotia's Labour minister says work will begin this weekend to remove a huge construction crane that collapsed in Halifax during Hurricane Dorian.

Labi Kousoulis says a structural engineering report has been completed and approved by his department and Halifax Regional Municipality Fire Department.

The twisted, yellow structure is draped over a building that was under construction in the city's downtown.

Video posted on social media showed the dramatic collapse at the height of the heavy rain and high winds Sept. 7.

Kousoulis said Friday the first work this weekend will see crews going from floor to floor to shore up the building in case it has been compromised.

"Posts will be put in place to ensure the building doesn't fall in case there's any compromised columns in it," he told a news conference at his constituency office in Halifax.

A drone belonging to Halifax Regional Fire and Emergency could be seen flying around the building Friday to assist crews in their assessment.

Then a portable crane will be brought in to begin removing the damaged crane piece by piece.

Kousoulis said the work should take about two weeks, depending on the weather or any problems.

"The top part of the crane resting on the building is 67,000 pounds. You are dealing with a lot of steel and a lot of weight. That is essentially what the challenge is," he said.

The minister said the crane collapse could have been much worse, but fortunately it fell on the only unoccupied space possible and no one was hurt.

Kousoulis said he's confident other construction cranes on the Halifax skyline are safe, but inspections will be done as a precaution.

He said some developers have taken it upon themselves to have inspections done by independent engineers.