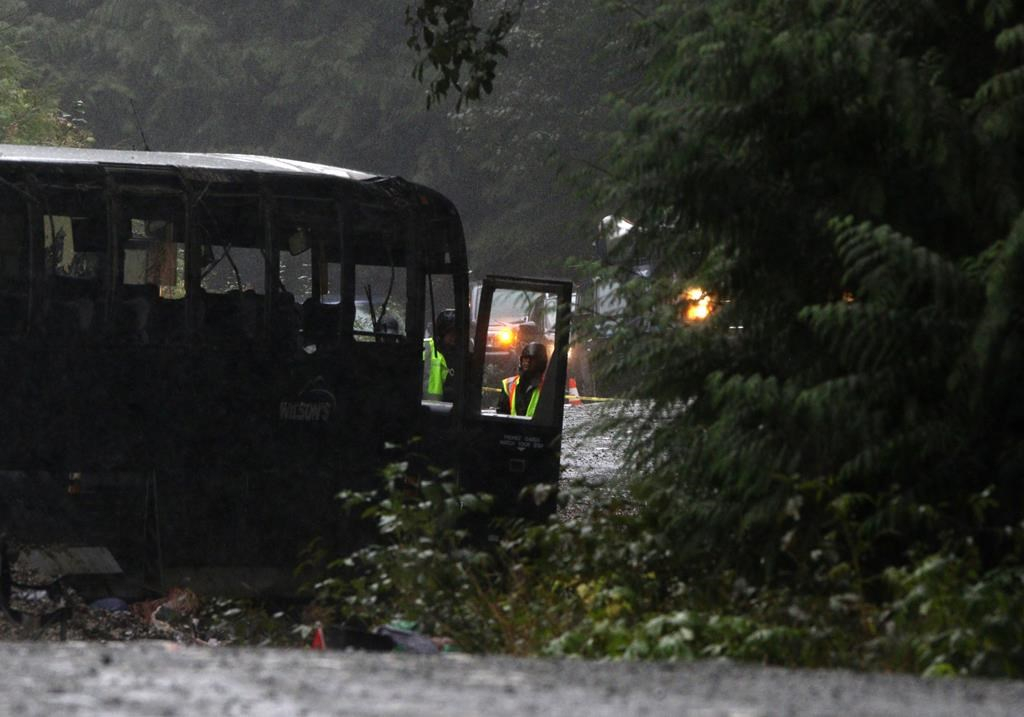 Search and rescue crews and RCMP help a tow-truck crew to remove a bus from the ditch of a logging road near Bamfield, B.C., on Saturday, September 14, 2019. Photo by The Canadian Press/Chad Hipolito
Previous story
Next story

Two University of Victoria students died and more than a dozen other people were injured Friday after a bus on its way to a marine research centre rolled over on a narrow gravel road on Vancouver Island.

The incident happened between the communities of Port Alberni and Bamfield, said the Joint Rescue Co-ordination Centre in Victoria, which received a call for assistance at around 10 p.m.

"It's pretty austere out there. Lots of trees, lots of hills, lots of rugged terrain, and the weather wasn't really co-operating," said navy Lt. Tony Wright, a public relations officer with JRCC.

The pilots couldn't land the helicopters at the scene so ambulances took the injured to an airport in Port Alberni, he said. From there, three people were airlifted to hospital.

Two of them were in critical condition and one was in serious condition, said Andrea Visscher, a spokeswoman for British Columbia Emergency Health Services.

Fourteen others in stable condition were taken by ground transportation to local hospitals, she said. BC EHS couldn't provide an update on any of the injured people's conditions.

"Once they're admitted into hospital, we don't get any further updates from them," Visscher said.

A school bus drove 29 others away from the scene, she said.

The RCMP is investigating the cause of the crash.

The Wilson's Group, which owns Wilson's Transportation Ltd., said in a statement that one of its buses was involved in the accident.

"Our immediate concern is with the passengers, the driver and their families," read the statement. "Management and ownership is working with authorities and the University of Victoria to address those immediate concerns."

Wilson's Transportation is a charter bus company that serves Victoria and Vancouver Island, according to its website. It operates more than 140 vehicles.

A statement from the university said the students on the bus were headed to the Bamfield Marine Science Centre.

"Our heartfelt thoughts go out to the students' families and loved ones, to whom we offer our sincerest condolences," said Jamie Cassels, the university's president.

The research centre also acts as a shared campus of several post-secondary institutions, according to its website.

An employee who answered the phone Saturday declined to comment on the centre's programs or why the students were travelling there, but according to its website it offers summer field courses, as well as a five-course fall semester program in marine sciences.

Robert Dennis, chief councillor for the Huu-ay-aht First Nations, was driving home with his wife when they passed by the scene

"There were some people laying on the ground, laying on what appeared to be blankets and were being looked after by the rest of the students," he said.

"They were definitely panicked."

The bus was overturned and about six to nine metres down an embankment, he said, adding that it rested against some trees, which seemed to have stopped it from rolling further down.

People were helping remove others from the bus and getting them up to the roadway, Dennis said, adding that he and his wife provided them with water and a rain poncho for warmth. He said he and his wife stayed at the scene to help in any way they could.

Dennis said the area has no cellphone reception and he estimates he was at the scene for about two hours until first responders showed up.

He said the incident occurred on a "dangerous" narrow stretch of the road, noting that the First Nations community has been asking the provincial government for the road quality to be improved for years. They would like to see it chipsealed, which he says would be a better pavement surface.

The road is more than 80 kilometres long and mostly gravel, said Port Alberni Mayor Sharie Minions. It was once mostly heavily used by logging companies, she said, but now it's also frequented by tourists and people living in coastal communities.

"It's a challenging road at the best of times. It's narrow and (winding)," she said, adding its condition is not up to standard. "It's a concern for sure."

The city has supported the First Nations community's call for improvements, she said, reaching out to the provincial government as well.

She'd like to see it paved or chipsealed, receive regular maintenance and increased lighting, and offer cellphone service for at least emergency calls.

But, she noted, the section of road was graded the day before the crash. She said Western Forest Products maintains that portion of roadway, and workers have agreed to continue to maintain it despite currently being in strike action.