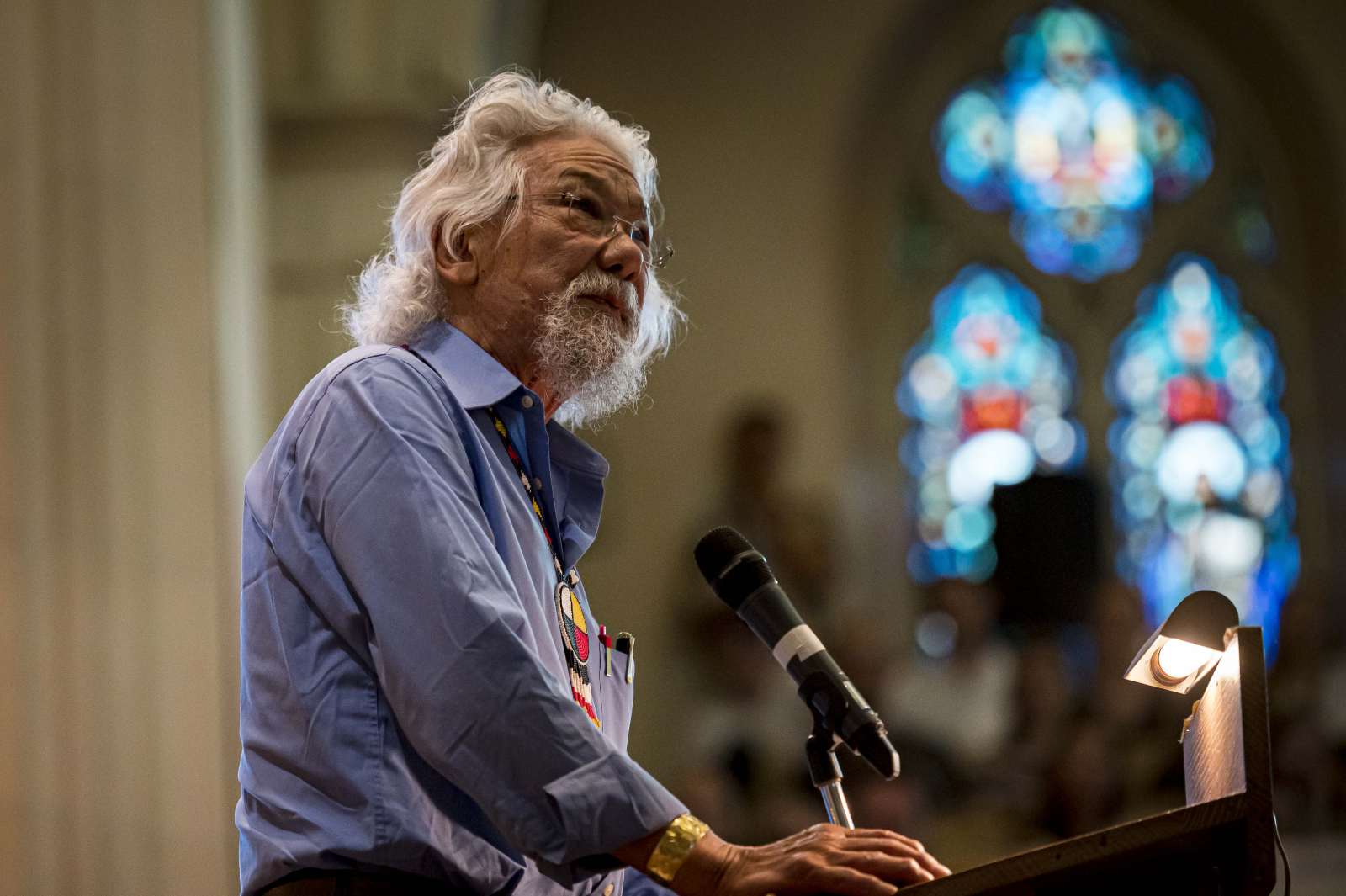 David Suzuki speaks to a crowd at the Toronto stop of the Green New Deal tour, on June 11, 2019. Photo by Christopher Katsarov
Previous story
Next story

This story is part of Covering Climate Now, a global collaboration of more than 220 news outlets to strengthen coverage of the climate story.

It’s been a long road for David Suzuki. This is his 40th year of hosting CBC’s documentary series, The Nature of Things. He helped establish the David Suzuki Foundation, a non-profit focused on sustainability, in 1990. And he says he’s become jaded after years of broken promises from politicians and business people about combating climate change.

Suzuki spoke with National Observer on the phone from his cabin on Quadra Island on the coast of British Columbia, where he was spending time with his children and grandchildren. He said he’s doubtful humans can make the changes needed to stop the world’s temperature rising by upwards of 1.5 C before 2030, as the UN Intergovernmental Panel on Climate Change has said is necessary to avoid catastrophic climate change.

The one place he still gets hope is from his grandchildren, who still see nature in the world as “fresh and marvelous and wonderful.” But he worries about their future.

“It just gives me more urgency, in terms of, for Christ’s sake, let’s save what’s left,” he said.

Suzuki says there is no “magic bullet” for stopping the climate crisis, but at this moment, the most important thing anyone in Canada can do for future generations is what many young people can’t yet do themselves — vote.

He kicked off a tour with Stephen Lewis, a former broadcaster, politician and Canadian ambassador to the United Nations, in Toronto on Sept. 14, to urge voters to vote with young people in mind. They were joined by singer-songwriter Buffy Sainte-Marie in Toronto, and Suzuki says they’ll be joined by other Indigenous women at their upcoming events in Vancouver, Winnipeg, Montreal and Halifax.

He says to vote responsibly, voters must look past party politics and vote according to which local candidates promise to prioritize climate change, rather than focusing on party leaders.

“Whether they’re right-wing or left-wing, to me, that’s not as relevant as their individual positions on climate,” he said.

He said there have been candidates from all parties across the country he would vote for “in a heartbeat.”

Gregory Efraim, a 15-year-old environmental activist from Ottawa who has participated in climate strikes, said this is a good idea as one strategy — though he also doesn’t think focusing on local members of Parliament (MPs) instead of party politics is a long-term answer.

“That MP could put the climate crisis very high up on their list, but if their party has shown a platform that’s very anti-climate action, then I don’t think that would greatly help,” he said. He said if he were to vote in the upcoming election, he wouldn’t be happy with any of the parties’ climate plans.

Efraim’s advice to voters: talk to youth in your riding.

“I’m not saying you have to always take what the youth are telling you,” he said. “But they should strongly consider and ask questions to youth and consider their opinions, because it’s the group that this will impact the most.”

Parents should be 'eco-warriors' against climate change

The David Suzuki Foundation launched a satirical campaign to change the voting age from 18 to eight years old to urge voters to think about future generations when they cast their ballot.

And while they can’t vote, Canada’s youth have been confronting the reality of climate change in a way Suzuki says politicians have not. Students have been organizing sustainability movements, such as joining Fridays for Future, a global movement led by activist Greta Thunberg in which youth strike in front of their city hall instead of going to school on Fridays to draw attention to the climate crisis.

While Suzuki thinks it’s great children are speaking up for themselves and the environment, he said he doesn’t find these movements inspiring – they make him feel desperation.

“I keep telling children that mom and dad should be eco-warriors fighting on your behalf. Your job is to get the best education possible and learn about the world and your place in it,” he said. “But for them to now be telling adults that ‘you’re fucking the planet and why should we bother going to school if we’re not even going to be around?’ – like that’s not inspiring. To me, that is just devastating.”

“Obviously every generation has a fight they have to go through. But 14-, 15-year-old kids, even younger – our youngest organizer in Vancouver is nine-years-old – someone that age shouldn’t be worrying about whether they’re going to have a future.”

Johnston agrees people should vote according to which local MP has the strongest commitment to addressing climate change, which he plans to do in October when he casts his first ballot. He hopes for electoral reform in the future. As for this election, Johnston is hoping for a Liberal minority government with the Greens or NDP as opposition.

Suzuki says his election tour with Stephen Lewis is “one last gasp” to make climate change a central, non-partisan issue.

“Stop using climate as a political football. This is an existential issue,” he said.

To him, this means “there shouldn’t be a Green party” because they contribute to making climate change a party issue.

Rebecca Hamilton, an organizer for Climate Strikes Canada based in Vancouver, will be six months shy of being able to vote in October, which she says is “frustrating.”

The 17-year-old agrees that in the future the Greens shouldn’t need to exist – but she thinks they play an important role in the moment where the major parties have lacklustre climate plans.

“In many ridings, the Green party candidate is a serious contender, and is a threat to the incumbent. That has made parties have to step up their climate action plan in order to compete. I think it’s causing everybody to reach a little bit higher,” she said.

'It’s what we do, not whether we win or not, that defines us'

When asked whether he has hope for this election and the future, Suzuki has a complex outlook.

“I believe in miracles. Miracles happen because we don’t understand everything… Nature surprises us. I believe there are many, many more surprises,” he said, citing the 2010 sockeye run in the Fraser River, which was the biggest run in over 100 years despite low projections.

“We have to keep hoping that nature will be very generous, if we can pull back and give her a chance.”

With or without hope, he said, “in the end, it’s what we do, not whether we win or not, that defines us.”

He teared up as he recounted holding his twin baby grandchildren and realizing how their lives would be impacted by the climate crisis.

“For the first time, I realized these kids don’t have a chance in leading a full rich life. And coming to grips with that has been the hardest thing for me, because I’ve always had hope that we could turn things around. But at my age, I just – we’re not going to turn it around in time,” he said.

“And all I can do is hope that when I die, I can look at my grandchildren and say, I just did the best I could.”

He said he feels like he and other activists have been banging their heads against the wall, but that has made it possible for people like Greta Thunberg to “jump over it.”

And one thing all these youth activists agreed on – they still have hope.

“I definitely have optimism,” Johnston said. “We, as young people and environmental activists across the country, will be able to make the environment one of those issues where you can’t be taken seriously if you don’t have a real plan to combat the environmental crisis.”

He said while this election is important, it’s more important to shift public opinion by continuing direct action like climate strikes.

“Shifting a party leader’s opinion – you get them to act for four years in the best-case scenario. But shifting public opinion, you can change the outcome for the country for decades.”

Hamilton also says she holds out hope for “a more just and beautiful future.”

“We still have faith that people’s inclination towards justice and towards health and towards joy will prevail. I can’t imagine not having hope. It just doesn’t make sense to me to just accept that we’re just going to spiral even further into instability and catastrophe and darkness.

The next global youth climate strike is scheduled on Sep. 27, when Greta Thunberg will join activists in Montreal.

Editor's note: This story was updated at 4:46 p.m. ET on Sept. 16, 2019 to clarify a quote from Suzuki that had been misheard. He had said that parents should be "eco-warriors," not "equal warriors" against climate change on behalf of their children.

Focus on the candidates

Focus on the candidates concrete climate commitment. NOTHING else matters if we don't behave like it's a major mobilization to make 50% cuts by the end of next year!!!!!