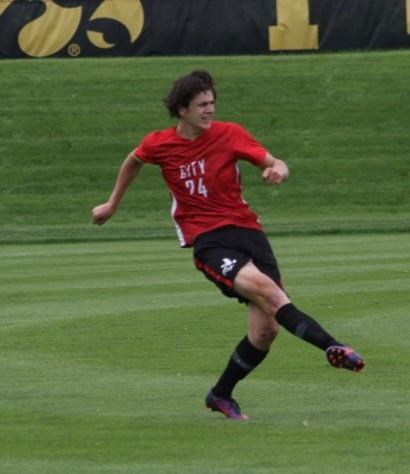 John Geerdes is shown playing on his Iowa City High School soccer team in the spring, shortly before he graduated and then enrolled at the University of Victoria. Handout photo by John Bacon
Previous story
Next story

One of two 18-year-old students who died when a tour bus crashed on Vancouver Island is being remembered by his former principal as a friend to everyone at the Iowa high school where he was a talented soccer player.

John Geerdes graduated from Iowa City High School this year before enrolling at the University of Victoria.

"He was very excited about studying at the university there," school principal John Bacon said Monday.

Geerdes was killed when a charter bus carrying 45 students and two teaching assistants crashed on a gravel road between the communities of Port Alberni and Bamfield late Friday.

Bacon said he emailed parents and students on Saturday after learning about the crash and a crisis team will be at the school to provide counselling.

Geerdes has four siblings including a sister at the school of 1,600 students, who are mourning the loss of Geerdes, he said.

"It's just a huge loss for a lot of people."

"They spent a couple of hours with their coach just sharing stories and I think that really helped those guys."

Robin Hicks, acting dean of the Faculty of Science at the University of Victoria, said in a statement the second victim was Emma Machado, 18, of Winnipeg.

Both were first-year biology students, he said.

"Although they had just begun their academic studies at UVic, both of these students demonstrated a love of marine biology and a passion for the natural world," he said.

More than a dozen students were injured in the crash on the remote road on their way to the Bamfield Marine Science Centre.

University of Victoria spokeswoman Denise Helm said one student remained in hospital on Monday but she could not provide any details.

Students from several universities attend the marine science centre and students from the University of Victoria have been taking field trips there every fall for at least 18 years, she said.

A community gathering is planned for at the university on Tuesday for students, faculty and staff.

Stella Peters of the Huu-ay-aht First Nation said she and her husband James Nookemus drove past the scene where she saw a bus down an embankment between 9 and 9:30 p.m. on the rainy night.

"(I saw) about 30, 35 kids standing on the side of the road, people frantic seeing the bus over the side," James said. "The boys were trying to help some of the other students out of the bus. They were trying to get them up the bank. There was quite a drop, a steep embankment."

The students wanted the couple to call 911 but there was no cellphone service in the area, Peters said.

"We had to keep driving just to try and get cell service and it was 20, 25 minutes later that we actually were able to get through. We were both on our cellphones and James finally got through to 911," Peters said.

"You should be able to reach people on your cellphone out there."

Peters said she's thinking of all the students, and especially of the families whose children have died.

"Our hearts go out to their families."

Robert Dennis, chief councillor for the Huu-ay-aht who arrived at the scene about 20 minutes after Peters and her husband, said he has called for a review of the emergency response protocol because of the lack of cell service.

"I'm worried and scared and you worry about anybody going on that road," he said, adding high-frequency radios could be installed in vehicles so communication is received in Port Alberni and Bamfield.

"That's why in our community we let each other know where we're going because we know it could be hours before anybody passes you in another vehicle. Especially at night time."

On the weekend, Dennis said the First Nation community has also been asking the provincial government for the road quality to be improved for years.

Claire Trevena, the minister of transportation and infrastructure, said Monday she has heard concerns raised about the road by the Huu-ay-aht First Nation and the local member of the legislature.

"Ministry officials have been looking into the issue to determine if safety improvements could be made," she said in an email statement. "The situation is complex as this is a private, industrial road, operated and maintained by private companies for active forestry operations."

The crash remains under investigation, but police said Monday that alcohol has been ruled out as a contributing factor.

In a statement, the RCMP said the driver of a second vehicle who was in the area at the time of the crash remained at the scene.

Over the coming weeks, the Mounties said investigators will work to determine the cause of the crash, which includes analyzing more than 40 statements that were taken.