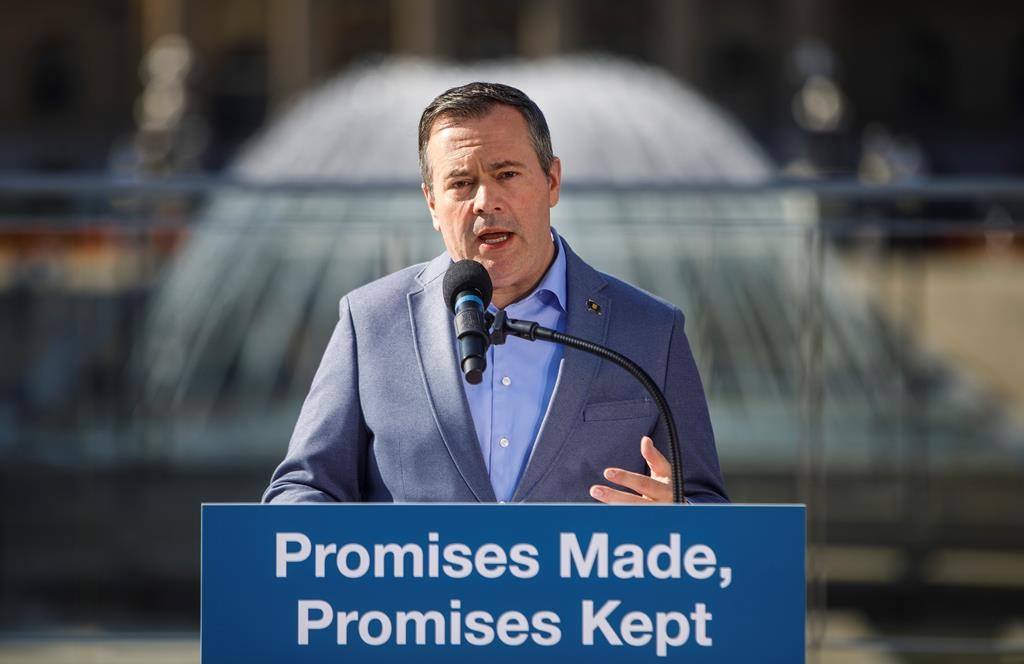 Alberta Premier Jason Kenney discusses the accomplishments of his government in its first 100 days in office, in Edmonton on Wednesday, August 7, 2019. Photo by The Canadian Press/Jason Franson
Previous story
Next story

An environmental law group is threatening legal action if the Alberta government's inquiry into foreign funding of oil and gas industry foes continues as is.

Vancouver-based Ecojustice has given inquiry commissioner Steve Allan 30 days to respond to a letter detailing its concerns and proposing ways to address some of them.

"It is Ecojustice's submission that the inquiry is ill-conceived, promulgated for purely political purposes and does not meet the test of expediency or being in the public interest," lawyers Barry Robinson and Kurt Stilwell write in the letter dated Tuesday.

The $2.5-million inquiry in its current form is "unlawful and potentially unconstitutional," they argue.

The inquiry is one plank of the United Conservative government's strategy to fight back against critics of Alberta's oil and gas industry, which has struggled to get its product to markets as new pipelines are mired in delays.

Ecojustice says in the letter there's a reasonable apprehension that the inquiry will be biased against the groups it's investigating. It says Kenney's public comments — as well as the wording of the inquiry's terms of reference — prejudge the outcome and label environmental campaigns as "anti-Alberta."

The group also says the inquiry risks violating rights to freedom of expression and association protected under the Canadian Charter of Rights and Freedoms.

Ecojustice adds that the inquiry must be procedurally fair, meaning anyone called before it must be able to cross-examine witnesses and receive copies of documents submitted as evidence, among other things.

It's proposing amendments to the inquiry's terms of reference that would fix some of those issues.

The public inquiry is meant to shed a spotlight on the "foreign-funded campaign to landlock Alberta energy," Kenney said Wednesday.

"Why are these groups so agitated by that? What are they afraid of? What are they trying to hide?" he said during a teleconference call from New York City, where he is promoting Alberta to U.S. investors.

He said he hadn't read the Ecojustice letter, but added that it sounded like a "regurgitation of the laughable letter from Amnesty International last week," in which the global human rights group's Canadian branch said it was "deeply concerned" with Alberta's fight-back strategy.

"I understand why these groups are hyperventilating. They have been able, for over a decade, to engage in a systematic campaign to defame Alberta's responsible energy production without transparency, without any pushback. The sort of letters we're getting now ... confirm that we are on exactly the right track."

Kenney's press secretary later sent media a link to Ecojustice's tax returns filed with the Canada Revenue Agency in which it discloses how much of its revenue comes from foreign sources. Last year, it received just over $1 million from outside Canada — about 14 per cent of its total annual revenue during the period.

Allan, the commissioner, is a forensic and restructuring accountant with more than 40 years of experience. His ability to compel witness testimony and records is limited to Alberta, but Justice Minister Doug Schweitzer has said much of the information Allan needs is publicly available. He'll be able to travel outside Alberta to gather more.

The inquiry's first phase is to focus on fact-finding. Public hearings are to follow if necessary. Allan is to deliver his final report to the government next summer.

Kenny still spinning out of

Kenny still spinning out of ConTroll. It just makes me want to increase the 86% of Ecojustice's funds coming from informed Canadians with no vested interests other protecting our very existence (though hopefully like-minded foreigners will keep donating too, to slightly counteract the massive foreign Big Oil funding of Kenny and the other Canadian fossil fools).