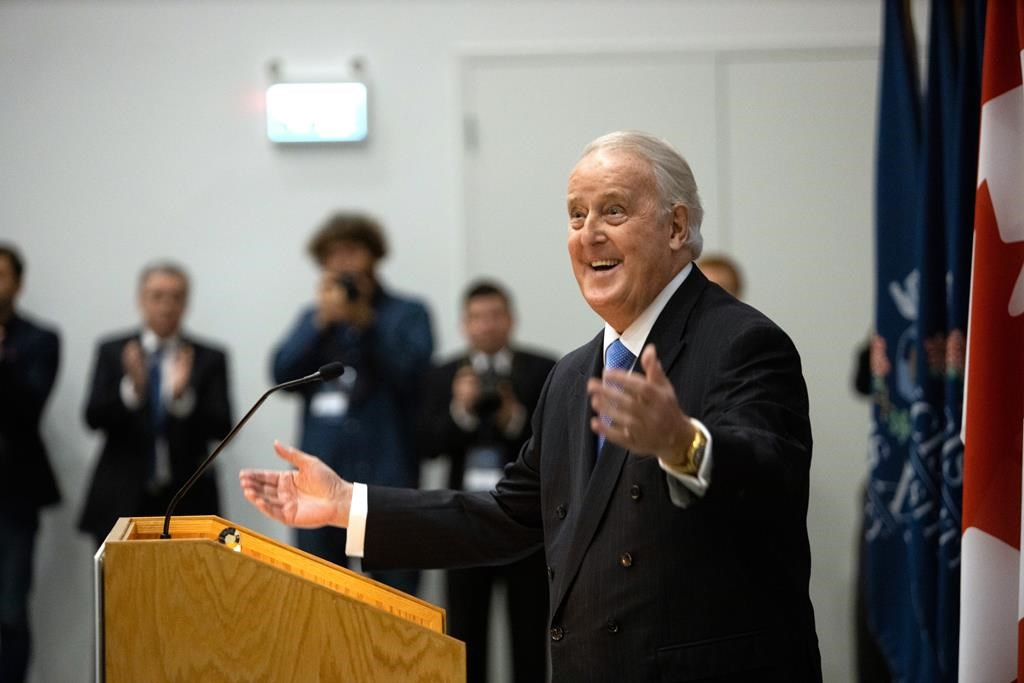 Canada's 18th prime minister graduated from the university in 1959.

The $60-million Brian Mulroney Institute of Government, housed in a new 75,000-square-foot building called Mulroney Hall, will offer what it says will be Canada's only public policy program for undergraduates.

In a speech prepared for delivery at the event, Mulroney said the institute would provide opportunities for young Canadians and others from around the world to "learn, lead and help build a better world for us all."

After thanking the many donors who made financial contributions to the project, Mulroney reminisced about growing up in Baie-Comeau, Que., where his father Benedict worked at the paper mill as an electrician.

In a story he has told many times before, Mulroney recounted how his father was opposed to his young son's plan to seek an apprenticeship at the mill.

Mulroney said his father told him: "The only way out of a paper mill town is through a university door — and you are going to university."

After graduating from St. Francis Xavier, Mulroney said he headed for the "big city with the bright lights, to conquer the world," but he said he had no money, no connections and no influence.

"But I had two things of far greater worth: a degree from St. FX and the values that had been inculcated into us by a superb faculty and university leaders, here in Antigonish."

The former prime minister, who held office between 1984 and 1993, said the school "opened the door to a wider world" by teaching him about the "power of ideas to transform our country, from one century to the next."

He said the university's professors also taught him never to give up.

"Defeat is not something to fear but surrender is something to reject," he said, repeating a phase he has used over the years.

"Throughout an active and sometimes tumultuous life, never once did it ever occur to me to quit. I learned on this campus that failure was not an option."

A text of Mulroney's speech was provided to The Canadian Press before delivery.

The plan to create the institute was launched in 2012, and Mulroney donated $1 million to the original fundraising campaign. He then helped raise almost $100 million — most of it from private donations, though the Nova Scotia government contributed $5 million.

When the project was first announced in October 2016, Mulroney said about $10 million would be set aside for an endowment to support student scholarships and bursaries.

Mulroney feted by business and political elite, refuses to speak about his past

Mulroney on his role helping Trudeau, despite rivalry with dad: 'That was then'