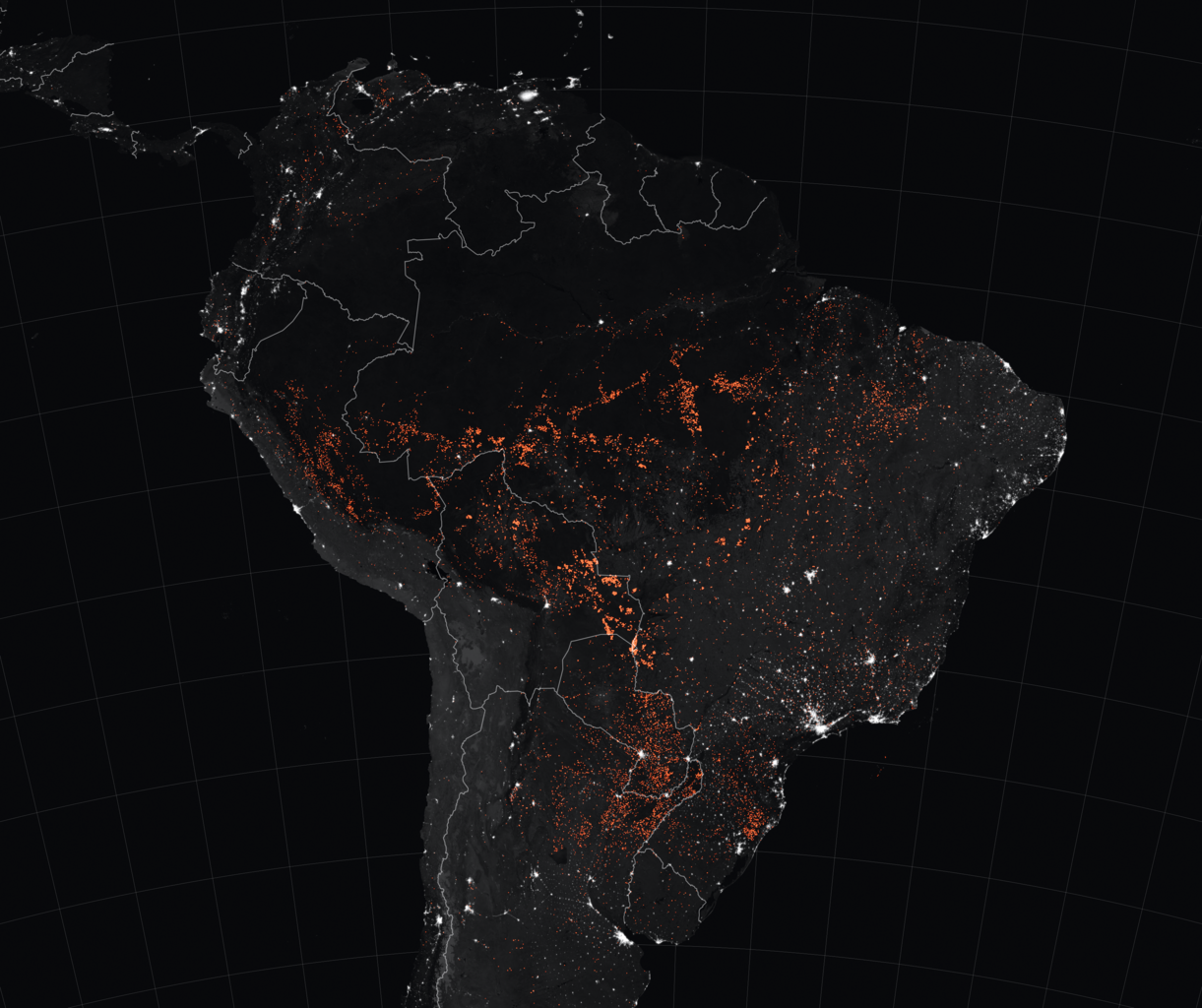 This story originally appeared in The Straits Times. It is republished here as part of the National Observer's partnership with Covering Climate Now, a global collaboration of more than 250 news outlets to strengthen coverage of the climate story.

Halfway across the globe, the world's largest tropical rainforest is in flames. Closer to home, swathes of green in Sumatra and Kalimantan are feeling the heat.

In the tale of two burning rainforests, there is a common thread: As the flames roar through the Amazon and South-east Asia, hopes of limiting greenhouse gases are going up in smoke.

Assistant Professor Kelly Andersen, from the Asian School of the Environment at Nanyang Technological University (NTU), explained that tropical rainforests help to take up planet-warming carbon dioxide from the atmosphere, locking the carbon in tree biomass such as trunks Content and roots.

When the tropical rainforests burn, the stored carbon is released into the atmosphere and the planet loses its natural defence against climate change.

Prof Andersen, who worked in the Amazon for more than five years, said: "As the world's largest tropical rainforest, the Amazon has been acting as a buffer to increasing carbon dioxide emissions from human activity, protecting us from even stronger global changes than what we are already seeing around the world."

Already, multiple agencies, including the United States National Oceanic and Atmospheric Administration and the European Union's Copernicus Climate Change Service, have independently confirmed that July this year was the hottest month ever recorded.

"This means that what happens in the Amazon will have far-reaching effects for people and places around the world," said Prof Andersen.

For people in Singapore, the fires burning in Indonesia can be more keenly felt, especially when haze wafts in. Earlier this week, air quality here was a whisker away from crossing into the unhealthy zone for the first time this year .

Ms. Aqeela Samat, palm oil demand specialist for the World Wide Fund for Nature Singapore (WWF Singapore), pointed out that Indonesia is currently experiencing its worst annual fire season since 2015, with fires this year razing an area at least two-thirds the size of Singapore.

"From Brazil to South-east Asia, the role of human activity in the onset of these forest fires cannot be denied."

The fires in the Amazon over 16,000km away also affect Singapore, experts say. And this is not just because of the Amazon's oxygen-producing abilities.

Associate Professor L. Roman Carrasco from the National University of Singapore's Department of Biological Science, explains that most of the world's oxygen supply comes from the oceans. Phytoplankton, tiny marine organisms, produce the life-giving gas when they photosynthesise.

"The Amazon produces 16 per cent of the oxygen produced by plants worldwide, which is still substantial. But producing oxygen is only one of the many services that tropical forests like the Amazon provide for us," says Prof Carrasco, who studies tropical forests.

One of the main ways that the Amazon can affect the global climate lies in its ability to soak up carbon from the atmosphere.

Carbon dioxide is blind to borders - it has the same impact on the climate, no matter where it is emitted, says Singapore Management University's (SMU) Associate Professor Winston Chow, a lead author for the upcoming report by the Intergovernmental Panel on Climate Change.

As he put it: "Molecules of carbon dioxide don't care where they're from. Whether they are from the Amazonian fires, or the smoke stacks in Jurong, or the oil fields in Texas, they all trap heat on earth in the same way."

This means that carbon sinks such as tropical forests, no matter where they are located, all help in the climate fight.

Human activity, such as the burning of fossil fuels for energy or the clearing of land, releases carbon dioxide into the atmosphere, where it acts like a blanket in trapping heat.

Data collected by scientists from the Scripps Institution of Oceanography in the US showed that global carbon dioxide concentrations stood at 408.82 ppm (parts per million) on Tuesday - a jump from the 280 ppm recorded at the dawn of the Industrial Revolution, around the year 1780.

The excess heat throws the climate system out of whack, causing the climate to change. The symptoms are clear: rainfall patterns are changing, resulting in too much rain in some places and drought elsewhere, while melting ice sheets contribute to sea-level rise. The warming also increases the likelihood of extreme weather events, such as heatwaves.

Professor Jean Yong, a botanist at the Swedish University of Agricultural Sciences, said: "The huge amount of carbon dioxide released from the Amazonian fires will increase the total concentration of carbon dioxide globally, exacerbating climate change-induced weather and environmental anomalies worldwide, including in Singapore."

The causes of the fires in the Amazon and Indonesia are similar, with land being cleared for agriculture, observers have pointed out.

Dr. Arief Wijaya, senior manager for climate and forests at think-tank World Resources Institute Indonesia, said that in South-east Asia, forests are cleared mainly for palm oil and pulp and paper, while in the Americas, land is cleared for soya farming or cattle ranching.

"From Brazil to South-east Asia, the role of human activity in the onset of these forest fires cannot be denied," said WWF Singapore's Ms. Aqeela, emphasizing that solutions have to go beyond putting out fires to addressing the root cause.

Across the Pacific Ocean, death by fire does not just affect the trees of the forest and their ability to capture carbon from the air.

The short-term, local impact of forest fires is multi-fold, scientists said, ranging from the health of people living near the fires, to the loss of biodiversity and ecosystem services.

Ecosystem services are the things essential to human life that nature provides. The Food and Agriculture Organisation of the UN puts the estimated value of ecosystem services at US$125 trillion (S$171 trillion).

NUS' Prof Carrasco said: "From a practical standpoint, the future cure of cancer could be lost in those fires. From an ethical standpoint, losing the Amazon means a huge loss of natural history.

"Imagine losing half of all the great books, movies, paintings, sculptures and historical buildings of the world. Imagine they are lost forever, your children will never know about them. Losing the Amazon is the natural equivalent to that."

Not about the size

But it is not just the large swathes of forests that are worth protecting.

Experts The Straits Times spoke to were unanimous in their belief that even tiny plots are worth saving.

When asked if this includes Singapore's fragmented forests, NTU's Prof Andersen said: "Absolutely. Take a walk along a big road and compare that with a stroll in Bukit Timah Nature Reserve. Forests, trees and green areas provide many ecosystem services - regulating the air we breathe, moderating temperatures by creating shade and taking up water rapidly during big rain events."

Singapore's forests are also remarkably rich and are home to globally critically endangered species, including the Sunda pangolin and the straw-headed bulbul.

Prof Yong said: "Singapore's natural forests are amazing hubs of tropical biodiversity. Despite the small size of Bukit Timah, or the mangroves, these natural green areas represent the last bastions of Singapore's intangible and iconic natural heritage for the next generation."