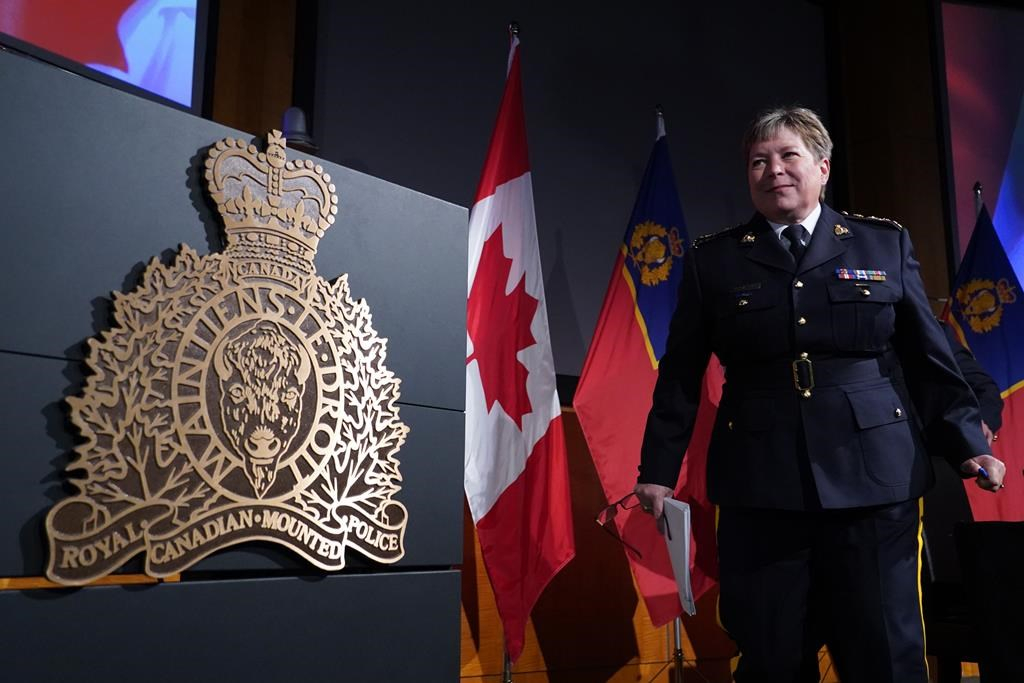 RCMP Commissioner Brenda Lucki leaves after providing an update on the ongoing investigation, arrest and charges against Cameron Ortis at RCMP National Headquarters in Ottawa on Tuesday, September 17, 2019. Photo by The Canadian Press/Chris Wattie
Previous story
Next story

An RCMP employee charged with trying to disclose secret information was discovered after a joint probe with the U.S. Federal Bureau of Investigation pointed to a mole in the force, top Mountie Brenda Lucki said Tuesday.

The RCMP commissioner, addressing the arrest of Cameron Jay Ortis in person for the first time, also said there is a lot of conjecture, speculation and false information swirling about the case.

Lucki told a news conference that investigators came across documents during the probe with the FBI that led the Mounties to believe there could be some kind of "internal corruption."

A sensitive-investigations team looked for months into possible leaks before the arrest last week of the 47-year-old Ortis, who faces charges under the Security of Information Act as well as two Criminal Code provisions for allegedly trying to disclose classified material to a foreign entity or terrorist group.

Lucki would not comment on a possible motive, what foreign entity is involved, or what information Ortis had access to in his role as director general of the RCMP's national intelligence co-ordination centre.

The FBI and international partners, including the RCMP, said in March 2018 that organized crime and drug-trafficking groups were dealt a blow by the takedown of the encrypted-communication service.

They said Phantom Secure bought smartphones, removed all of the typical functions — calling, texting, internet, and GPS — and installed an encrypted email system, so the phones could communicate only with each other.

If a customer was arrested, Phantom Secure destroyed the data on his or her phone, which is obstruction of justice under U.S. law, police said.

Lucki cautioned that the "information in the public domain is speculative, unhelpful and may be harmful to our investigation and judicial process. We also need to be mindful of the privacy of the accused and his right to fair trial."

The force is still trying to assess and deal with the damage that might have resulted from the Ortis case, she said.

"Until we know what we're dealing with specifically, our risk assessment is fluid and the measure of severity of such an event is fluid as well."

Joe Crook, a spokesman for the U.S. Embassy in Ottawa, said the Americans have been "in touch with Canadian authorities about the situation and have offered our full support."

Lucki played down any suggestion the RCMP's partners might lose trust in the force over the case. "There is always that possibility, but I am confident that measures that we have in place will mitigate those such risks."

The arrest should not be seen as a reflection on the work of the RCMP as a whole, she added.

Ortis began his career with the Mounties in 2007 after earning a doctorate in political science. Prior to his role with the intelligence co-ordination centre, he held positions in operations research and the national-security criminal investigations directorate.

Lucki said the arrest will not dissuade the RCMP from pursuing plans to hire more civilians as part of a modernization effort.

"Absolutely not," she said. "Every employee in the RCMP is value-added to our organization and a valued employee, so, no, not at all."

Ortis is slated to make his second court appearance on Friday.

— With a file from Mike Blanchfield