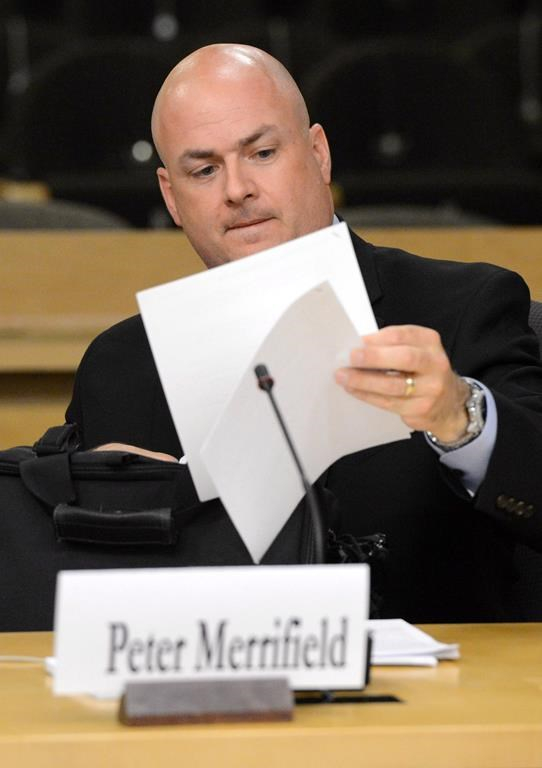 Peter Merrifield, president of the Mounted Police Association of Ontario, appears at Senate national security committee to discuss harassment in the RCMP on Monday, May 27, 2013. File photo by The Canadian Press/Sean Kilpatrick
Previous story

An RCMP officer who accused his superiors of waging an unrelenting campaign to ruin his career lost his 12-year battle to sue the force for harassment and intentional infliction of distress when the Supreme Court of Canada on Thursday refused to hear the case.

Sgt. Peter Merrifield had wanted the country's top court to weigh in after Ontario's Court of Appeal eviscerated an earlier ruling in his favour.

Merrifield joined the RCMP in 1998. His suit, launched in 2007, claimed his superiors began a seven-year campaign to damage his reputation after he took part in a federal Conservative party nomination meeting in Barrie, Ont., in 2005. Their measures, he alleged, included punitive transfers and unfounded accusations he had committed criminal acts.

The lawsuit named the RCMP, Insp. James Jagoe and Supt. Marc Proulx. Among other things, Merrifield claimed his superiors had secretly investigated him, audited his expenses, blocked him from taking part in sensitive investigations, bad-mouthed him to confidential informants, and bullied him based on their accusations that he had used the police force to advance his political career.

In a judgment in February 2017 that followed a 40-day trial, Superior Court Justice Mary Vallee concluded that senior RCMP officers had harassed Merrifield mercilessly and damaged his career after deciding he had lied to them about his unsuccessful bid to run for the Tories.

Vallee's ruling that ran to 174 pages slammed the Mounties for their egregious conduct and "reckless" disregard for the harm they were inflicting on him. She awarded him $141,000 for harassment and mistreatment, and another $825,000 to cover the legal costs of his protracted battle.

But in an equally blistering judgment that upended her decision, the Ontario Court of Appeal shredded Vallee's conclusions. Her judgment, the Appeal Court said in March, was riddled with errors — both in her legal analysis and fact finding.

Among other things, the appellate court said in a unanimous decision that was partly a legal lecture on common law evolution, Vallee had erroneously created the new civil wrong of harassment for which someone could be held liable.

The appellate court also found the father of three had played a role in his misfortunes because he had not been completely truthful with his superiors and had given them reason to mistrust him.

Neither the RCMP nor Merrifield had any immediate comment but his lawyer, Laura Young, expressed disappointment with the Supreme Court's refusal to hear the case.

"We all know that harassment and abuse of authority are real problems within the RCMP," Young said. "There's inconsistent law on the issues, and it was obviously very timely,(so) the law would have benefited from having the scrutiny and consideration from the Supreme Court."

The trial in Newmarket, Ont., at which then-RCMP commissioner Bob Paulson testified, garnered national attention in part for a shroud of secrecy thrown over some of the proceedings. When Merrifield called "Witness X" to testify at one point, the hearing abruptly went in-camera and Vallee sealed related material along with a copy of her sealing order itself.

BREAKING: RCMP and CSIS investigate who is spying on Ottawa phones