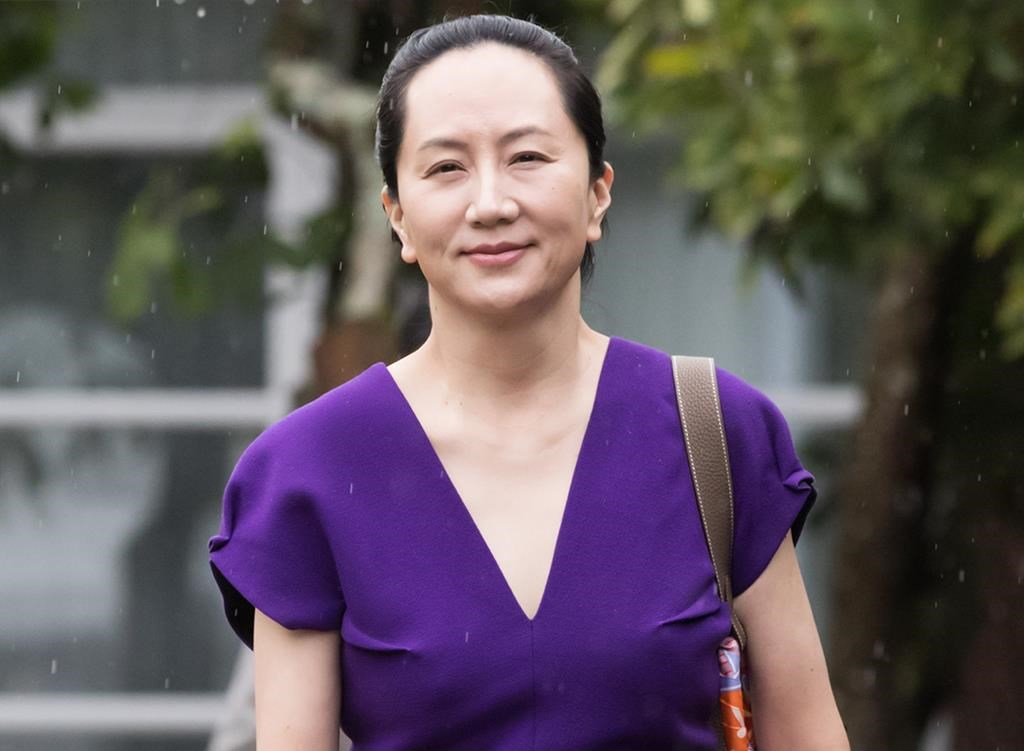 Canadian officials followed the law when they detained Huawei executive Meng Wanzhou at Vancouver's airport and the defence has no proof to substantiate its "conspiracy theory" that she was illegally arrested, the Crown says.

The Attorney General of Canada says in court documents released Monday that there's no evidence to suggest that the RCMP or the Federal Bureau of Investigation in the United States asked border agents to elicit information from Meng during the detainment.

Meng, whose arrest has sparked a diplomatic crisis between Canada and China, returned to British Columbia Supreme Court on Monday where her lawyers are asking for documents that they say would support their allegations.

The Huawei chief financial officer was arrested on Dec. 1, 2018, during a stopover in Vancouver on her way to Mexico. The arrest was at the request of the United States, which is seeking her extradition on fraud charges.

The U.S. alleges that Meng misrepresented facts to HSBC regarding Huawei's business dealings in Iran, which put the bank at risk of prosecution for violating sanctions against the country.

Both Meng and the Chinese tech giant have denied any wrongdoing and none of the allegations have been tested in court.

The court released hundreds of pages of documents on Monday, including the Crown's written reply to the defence's request for documents and surveillance video without sound showing Meng speaking with agents from the Canada Border Services Agency at the airport.

In its reply, the Crown says border agents followed proper procedure in examining Meng and her goods to determine her admissibility to Canada and her charter rights were not breached.

It says the border agency is empowered by law to examine a traveller's cellphones, and in this case they placed Meng's phones in evidence bags and requested her passcodes but ultimately decided against looking through the devices.

The RCMP also followed procedure by waiting to execute the provisional arrest warrant until after border officials had suspended their examination of Meng, it says, adding that the Mounties legally seized her phones at that point.

Officials and solemn declarations by the RCMP and border service officers record their encounter with Meng, the Crown adds.

"If the CBSA and RCMP together have engaged in a 'well-coordinated scheme' and 'strategically drafted' their notes to conceal misconduct, why would the RCMP ... record the contents of their meeting in detail?" the Crown asks.

The Crown also says Meng's lawyers have failed to justify the "draconian remedy" of a stay of proceedings. It adds that it has already provided Meng's lawyers with extensive disclosure and much of what they seek has already been turned over.

However, the defence team alleges extensive misconduct including delaying the arrest, deceiving Meng about the nature of her detention and abusing their statutory powers in order to collect evidence for the fraud case in the U.S.

Defence lawyer Richard Peck told court Monday that border services and the RCMP "collaborated, arranged a plan" to deal with Meng in a way that violated the provisional arrest warrant.

"This plan delayed the implementation of Ms. Meng's rights and afforded the CBSA an opportunity to interrogate her and that such information was arranged to be shared with the RCMP and with the FBI," Peck said.

Peck told the court that border officials handed Meng's phone passcodes to the RCMP. They made efforts to obscure the nature of interactions with Meng and omitted details in documents including notes and declarations to fulfil that purpose, he said.

"Lifting language from the authorities, we refer to this as a 'covert criminal investigation' under the pretext of an admissibility exam for immigration purposes," Peck told the court.

Peck also alleges Meng's arrest is part of a history of American officials detaining Huawei employees at airports, pointing to "expected testimony" from a confidential witness who says her work laptops were searched or seized at ports of entry.

He argued that there's enough evidence to suggest further documents exist to support the argument that Canadian officials acted as agents of U.S. law enforcement.

He pointed to an email that he said is from an FBI agent to a Canadian official.

"It says 'Ben, thank you,' — this is from the FBI — 'thank you for all the work. Appreciate the co-ordination. As soon as a warrant is obtained, the information should be heading to RCMP and CBSA,' " Peck read to the court.

The other documents released Monday include correspondence in August between Crown lawyer John Gibb-Carsley and defence lawyer David Martin, which says the U.S. no longer seeks the electronic devices seized from Meng.

Another document is an affidavit by Meng, in which she details her family's "extensive" ties to Canada and Vancouver.

Huawei appears to be ramping up its public relations strategy around the case, tweeting a photo taken Monday outside her Vancouver home that says, "Ms. Meng walks to media to thank them for waiting in the rain before leaving for court."

The company also posted a brief video statement in which spokesman Benjamin Howes said Huawei believes she is innocent and has every confidence that she will be vindicated.

Meng wore a royal purple dress to the hearing along with a court-ordered ankle bracelet and sparkling stiletto heels.

When she arrived, she stopped to speak with a pair of supporters. She smiled at reporters and replied she was "fine" when asked how she was doing.

Her extradition trial won't begin until Jan. 20 and she is free on bail while living in Vancouver.

This report from The Canadian Press was first published on Sept. 23, 2019.

Freeland lands meeting with Chinese counterpart to talk about detainees

No decision on Huawei and 5G before fall federal election call: Goodale