By Davide Mastracci | News, Politics | September 26th 2019
#102 of 115 articles from the Special Report: State of Journalism 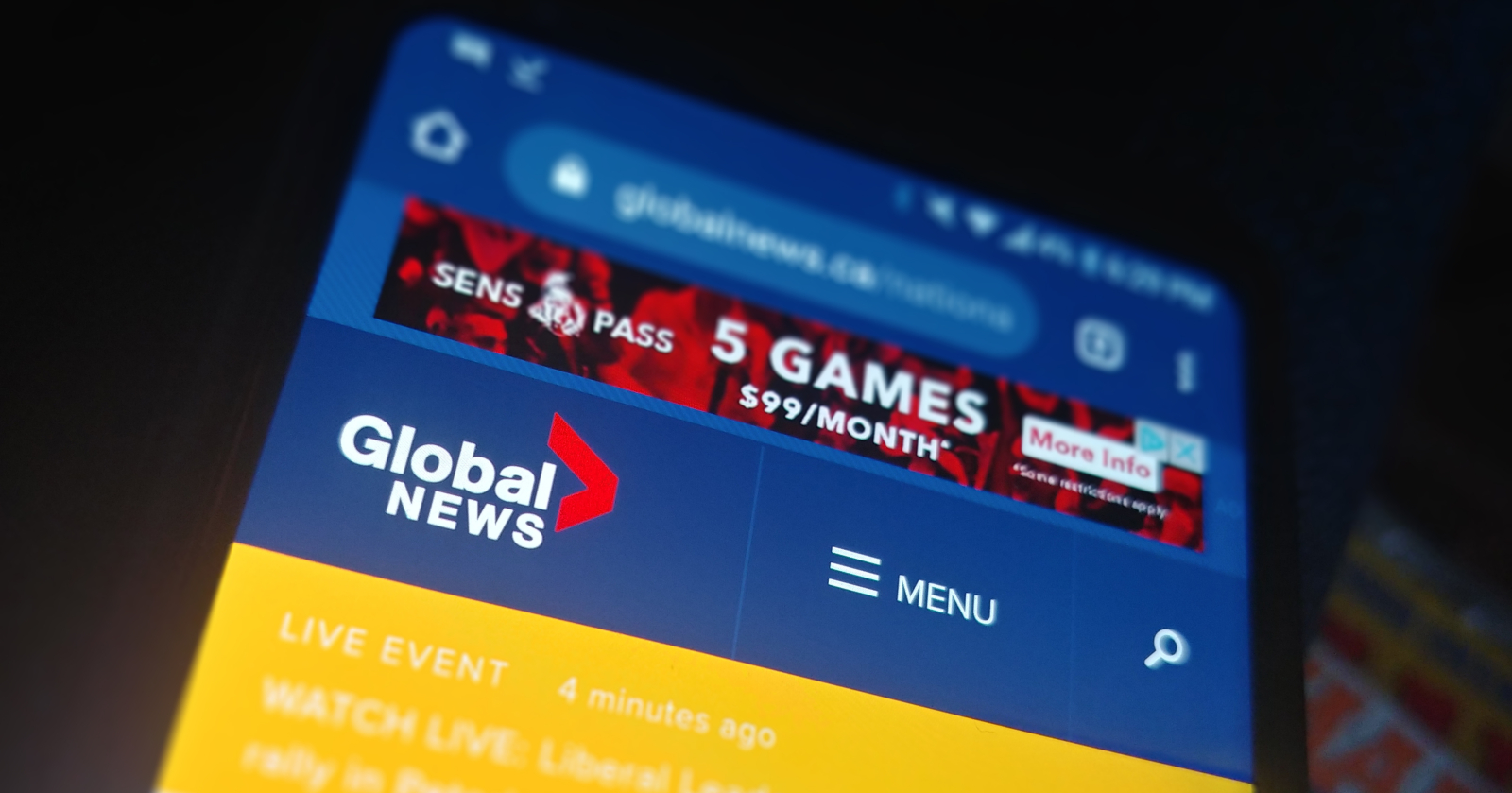 A user checks the Focus BC website on their smartphone on Sept. 26, 2019. National Observer File Photo
Previous story
Next story

Global News BC refused to air a recorded discussion after one of its employees was caught joking about blackface and called out during the segment, one of the panel’s participants says.

While waiting for the recording to begin, Dhaliwal says, the control room switched audio channels on his earpiece, and he overheard a conversation between two Global employees not involved with the panel.

According to Dhaliwal, one person said they were waiting for an employee. Another replied asking where that employee was, and then the first person, using what Dhaliwal describes as a snide tone, said they were going to get him but “he’s just getting his blackface on.”

At first, Dhaliwal says, he was shocked by the comment, and with only a few seconds to compose himself before the panel began, he was still processing it throughout the discussion. He eventually brought the comment up during the panel, using it as an example of how normalized he believes this sort of humour has become.

The other panellists didn’t react to his comment, and seemed confused, which Dhaliwal believes is because he was the only one who heard the blackface comment due to the audio glitch.

The spokeswoman for Global News, Rishma Govani, told National Observer, “As a news organization, we take this matter very seriously and hold ourselves accountable, acknowledging our own role in this situation. Global News conducted an internal investigation and had numerous followup conversations with Mr. Dhaliwal after the incident; explaining our reasons for not airing the segment.”

The entirety of the statement provided to National Observer is included at the end of this article.

Within a few hours of the panel finishing, Dhaliwal was contacted by the employee who made the comment, as well as by Michael Hennigar, executive producer at Global News BC.

They both offered Dhaliwal apologies, but he says he chose not to accept them because he’s not part of the black community, and sees blackface as an example of anti-black racism specifically. He added, “Even if it was a comment regarding my experience, who am I as an individual to forgive (them) for a comment that could hurt a whole people?”

Dhaliwal also told Hennigar, “Frankly, we have too many apologies without remedy,” and asked, “What’s the work you’re willing to put in to actually make better what you’ve done here?”

When the discussion moved on to potential remedies, however, Dhaliwal said he became more upset because Hennigar said the panel would never air. “I was told it was a CRTC (Canadian Radio-television and Telecommunications Commission) issue, and that they could lose their broadcast licence if they air it.”

The joke was not made on the air, as it took place before the recording began. Journalists are also not prohibited from reporting on, or discussing, racist comments.

Dhaliwal said he took it upon himself to tell two of the three other panelists, all racialized people, the segment wouldn’t air. He says he was the first to do so.

Over the next few days, Dhaliwal spoke with Jill Krop, the director of news and community at Global News BC, on multiple occasions. She reiterated the panel would never air.

Krop told Dhaliwal an investigation was conducted the night of the panel, and the employee who made the comment had been disciplined. She wouldn’t tell Dhaliwal what disciplinary action had been taken.

When contacted, both Krop and Hennigar referred National Observer to the spokesperson for Global News.

Dhaliwal was not satisfied that the employee who made the comment had been disciplined, he says, because that was never the goal of his complaints.

“I’m trying to make this conversation about the context and the power structures we operate in. Let’s talk about the disease, and not just a bunch of the symptoms.”

One of the underlying issues Dhaliwal pointed to was media organizations telling their readership and other journalists they’re interested in diversity and inclusion yet not really being committed to tackling these issues.

“If you’re interested in that experience and that voice, then you have to include it authentically and not work to silence it when it gets awkward for you,” he said.

This contradiction between how the media covers other institutions and itself, Dhaliwal said, is what the public missed out on hearing about due to Global not airing the panel.

“There was a very particular moment in which we could have had an honest conversation about these incidents occurring in (the media’s) house, while (they’re) setting fire to somebody else’s house,” he said.

These sorts of incidents continue to occur, according to Dhaliwal, because media organizations have failed to address newsroom and management biases. He also said that when he approached media outlets with this story, he was told, “If we make Global a target, then maybe the bull’s-eye is going to be on us next.

Dhaliwal said: “What I’m looking for is for somebody to show some integrity, and actually take accountability for what happened.”

Dhaliwal met with Krop and Hennigar in person on Monday. They reinforced that they wouldn’t be airing the panel, but gave a different reason than before, claiming they’d get complaints due to Canadian Broadcast Standards Council (CBSC) broadcast standards.

Instead, they told Dhaliwal, they’d eventually address the issue on air and give him time to speak about what happened. He said he plans to use the time Global has promised him to address some of the systemic issues he’s mentioned.

The statement from the Global News spokesperson provided to National Observer reinforces this, as it notes, “We apologized to him and have invited Mr. Dhaliwal to come back on our airwaves to discuss the matter and explore the deeper issues of systemic racism.”

While this development is a bit encouraging for Dhaliwal, he still sees it as a symptom of a deeper issue, as he says he told Global, “Look at what it took for me to get you to the table to talk to me about doing the right thing. This is a huge amount of labour you’re putting on a racialized person. If you’re for diversity and inclusion, you shouldn’t have made it this hard.”

Ultimately, Dhaliwal says, he decided to make this story public after speaking with several members of his community he trusts and values. Some of them suggested he should privately negotiate something with Global News, due to fears they had that going public would lead to community voices losing access to the platform.

Dhaliwal understood why they felt this way, but was upset at the idea members of his community would have to negotiate to get their voices heard.

“No, no, no,” he told National Observer. “That’s not going to happen.”

Global News BC's statement to National Observer: “As a news organization, we take this matter very seriously and hold ourselves accountable, acknowledging our own role in this situation. Global News conducted an internal investigation and had numerous followup conversations with Mr. Dhaliwal after the incident; explaining our reasons for not airing the segment. We apologized to him and have invited Mr. Dhaliwal to come back on our airwaves to discuss the matter and explore the deeper issues of systemic racism.”

National Observer has collaborated with Global News on more than a dozen co-produced pieces of journalism since 2017 and the two media outlets continue to collaborate on a few ongoing projects.

Looking Canadian racism in the face

I agree with Mo Dhaliwal.

I agree with Mo Dhaliwal. There are far too many apologies and they become meaningless. Trudeau apologises and apologises. People should spend more time thinking about what they are doing and saying beforehand and thus not hurt other people. We are all just people and breathe the same way, bleed the same way and require the same nutrients. Why not try living the Golden Rule even if you are not religious or a Jewish proverb that apparently says; Do not do to others what you wouldn’t have them do to you.