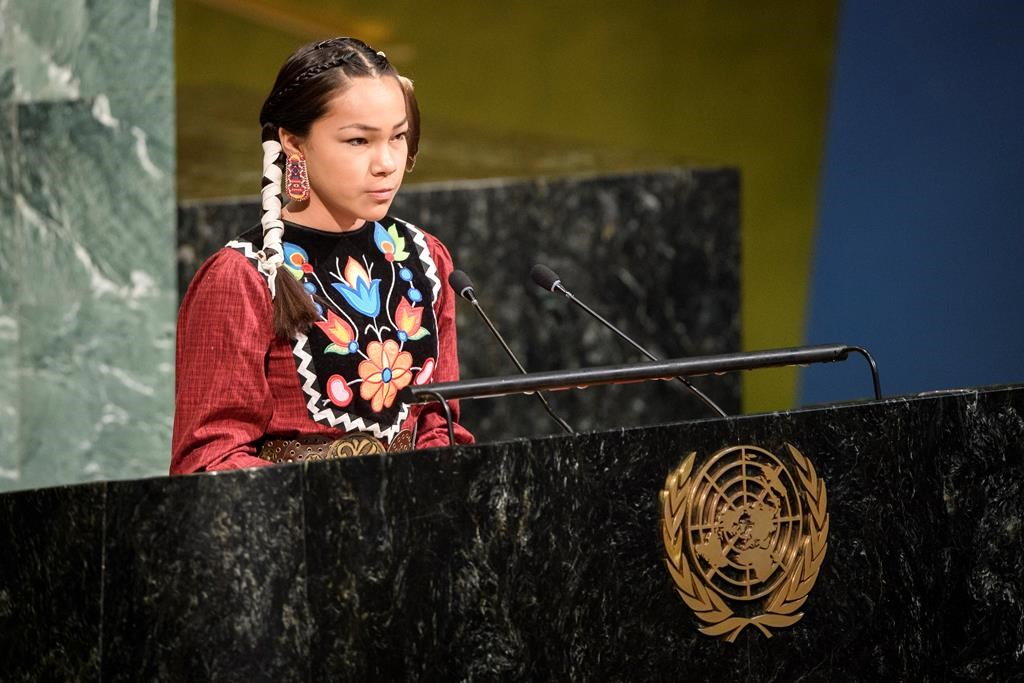 She's not old enough to get her learner's permit, but Autumn Peltier has been a driving force in the fight to protect water in Canada's Indigenous communities for years.

The teenage activist from Wiikwemkoong First Nation on Manitoulin Island in northern Ontario has been engaged in the issue since she first came across a boil-water advisory in a nearby Anishinaabe community when she was eight years old.

But Peltier said she's had this connection since she was in the womb, where according to cultural teachings, one learns to love water as they love their mother. It traces back even further to her female ancestors, from whom she inherited her traditional role as a water carrier.

As she turns 15 on Friday, the same day students across Canada are expected to march in a massive strike intended to disrupt climate-change inaction, Peltier finds herself at the forefront of an environmental movement being led by youth like her and Swedish climate activist Greta Thunberg.

This weekend, Peltier — the chief water commissioner for Anishinabek Nation, which advocates for 40 member First Nations in Ontario — will return to the United Nations to share her vision for a world in which everyone has access to clean water.

"I'm willing to do my best to represent Canada and the Indigenous people and have a strong voice for our future," she said by phone from New York.

"I basically want to tell them about the importance of water from a cultural, spiritual level, and then try to tell them that it's time for action."

Peltier is set to address hundreds of international guests on Saturday at the Global Landscapes Forum, a platform on land use backed by UN Environment.

It's her second time speaking at the UN headquarters in Manhattan, having urged the General Assembly to "warrior up" and take a stand for our planet last year.

Peltier, who was nominated for the 2019 International Children's Peace Prize by the David Suzuki Foundation, has spread her message at hundreds of events around the world, her mother, Stephanie Peltier, said.

In 2015, Peltier attended the Children's Climate Conference in Sweden, and a year later, confronted Prime Minister Justin Trudeau about his "broken promises" at a meeting of the Assembly of First Nations.

"She has taken Canada's water crisis on Indigenous lands to the global stage," Robert Nasi, executive director of the Global Landscapes Forum, said in a statement.

Peltier will help kick off the forum's conference on ecosystem restoration with a speech drawing on her spiritual knowledge about Indigenous Peoples' connection to land, water and Mother Earth.

The event comes on the heels of the UN's Climate Action Summit, where earlier this week 16-year-old Thunberg delivered an impassioned plea and scolded world leaders for their inaction on climate change. Thunberg is expected to attend Friday's climate protests in Montreal.

Peltier had hoped to meet up with Thunberg in New York, but said making plans proved to be difficult. She's still excited to connect with other international youth activists, particularly those from Indigenous communities.

Peltier feels her generation is leading the charge on climate change, because while they may not have created the problem, they're poised to suffer the most severe consequences.

"Will we even have a future to look forward to, for our future children, grandchildren?" she said. "This is our future we're trying to protect and take care of, because it's being basically destroyed."

With youth-led climate strikes sprouting up across the globe, Peltier's mother said there are signs that adults are finally catching up.

"Where I come from, the youth are our teachers. We learn from them, and so you have to listen to them," Stephanie Peltier said. "Today, I think it's just an eye-opener, and the youth are being empowered and they're being allowed to share."

She said her daughter's Instagram audience has seen a tenfold increase this week from 5,500 followers to more than 55,000 as of Thursday afternoon.

She assumes that Thunberg's moment in the global spotlight may be a factor in this exponential growth. She noted that young Indigenous activists have long been advocating for environmental issues, but are only now receiving recognition.

"We know first hand ... that our people have been impacted for many years," she said. "Now everybody's saying, hey, what about the Indigenous people? They've been doing this work too."