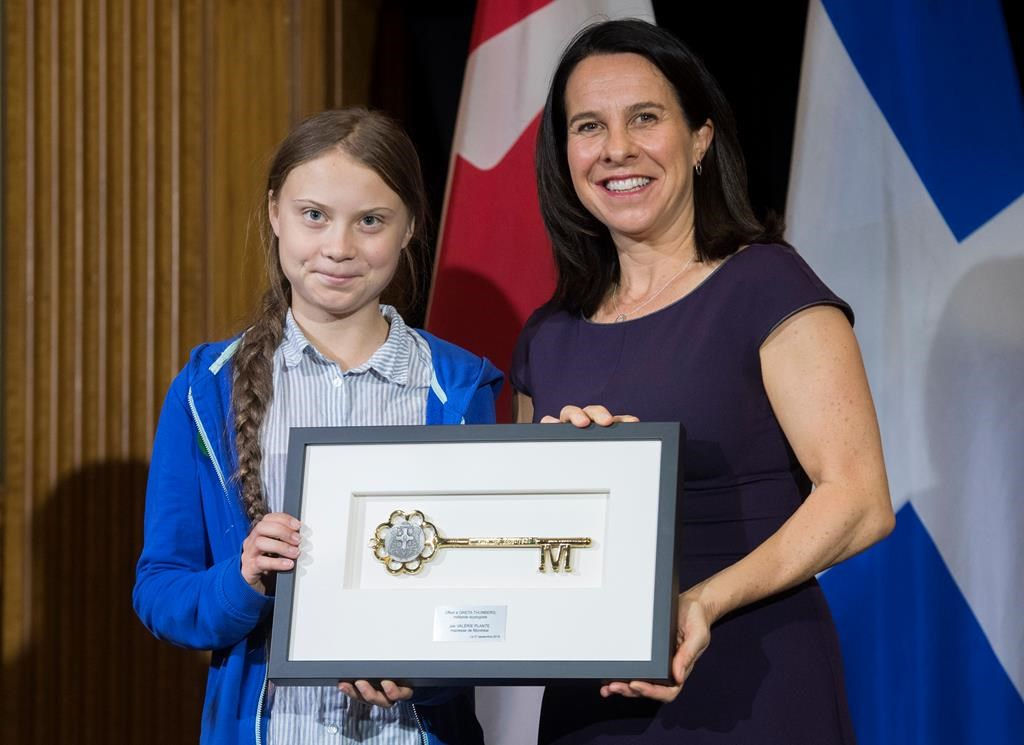 Swedish climate activist Greta Thunberg, left, receives the key to the city from Montreal mayor Valerie Plante during a ceremony in Montreal, on Friday, Sept. 27, 2019. Photo by The Canadian Press/Graham Hughes
Previous story
Next story

Montreal was hit by Greta-mania Friday as teen Swedish environmental activist Greta Thunberg took the city by storm, bringing her message that urgent action is needed against climate change.

Arriving via New York City, driven in an electric car provided by former California governor and Hollywood star Arnold Schwarzenegger's, she marched in a climate protest that was part of a global movement she helped spark just over a year ago.

Her name was on the lips of just about everyone in the city on Friday — culminating with chants of "Greta" roaring through a crowd spanning several blocks as she addressed marchers before receiving the key to the city from Montreal Mayor Valerie Plante.

Her ascent is nothing short of amazing says environmentalist David Suzuki, who described Thunberg as an exceptional person — "the right person at the right time."

"There is no question that Greta has had an impact that is greater than all of us environmentalists put together," Suzuki said. "But I think it's because of the circumstances, the reality of climate change now, are so very obvious."

He said Thunberg "has punctured the ceiling, she has just gone through and taken it to a different level and got the message that we've been trying to get across for years: Listen to the science."

Her image as a passionate, fiery, sometimes polarizing figure gave way to that of your everyday 16-year-old as she met a throng of national and local media in a lush garden near the foot of Mount Royal, fresh from telling Canada's prime minister he hasn't done enough to combat climate change.

"I don't have anything prepared," she said with a nervous laugh. "I'm very excited to be here, and it is going to be very much fun today, to once again stand together, people from all around the world, for one common cause that is very empowering. It is very moving to see everyone, everyone who is so passionate to march and strike, people of all ages, all generations, so yeah, it is a very good day, I would say."

She was greeted as a "young warrior lady" by Assembly of First Nations National Chief Perry Bellegarde and marchers honoured her with signs declaring, "Make the world Greta again."

"I think it's a good thing, because leaders today don't take action, so we should listen to her. Even though she's young she has great ideas," Journault said.

It was in August 2018 that she began her weekly "strikes" dubbed Fridays for Future in front of the Swedish parliament. Now, in the space of a year, Thunberg has joined the select group of international celebrities recognizable by a single name.

Doug Miller, a member of the Montreal chapter of Elders for Environmental Justice, says her appeal comes from her "magnificent simplicity."

"It's absolutely simple, but it's based on science," Miller said as he prepared to march. "People are calling it an emotional response. Listen to her. She's giving you the facts and laying it out very clearly."

Miller, a grandfather of nine, said Thunberg's message is one that spans generations.

"She really speaks for a generation I believe and is so articulate, but she's not alone. Look around here," he said. "These are smart kids. They're ready to go, and if the elders aren't listening, they're going to be in for a shock."

Eve Grenier Houde, who heads up the local chapter of Fridays for Future and has been organizing demonstrations since February, said she was amazed with the turnout.

"I remember in February, we were stressed out, we were 100 and even the police officers told us we had to be much more," Grenier Houde said. "To see the mobilization today, I'm very happy, but we have a lot more work to do."

As for why Thunberg finds herself under attack by certain segments of society, the activist said doesn't really know why, but doesn't mind it.

"I don't understand why grown-ups would choose to mock children and teenagers for just communicating and acting on the science when they could do something good instead," Thunberg said. "But I guess they must feel like their world view, or their interests, or whatever it is, is threatened by us, and that we should take as a compliment."

Suzuki said Thunberg's Asperger's syndrome — may be her saving grace.

"The Asperger's may very well be ... she calls it her super power. The condition, you can tell, she doesn't care what the others are saying," Suzuki said.

"I can't even imagine the pressure she's under."