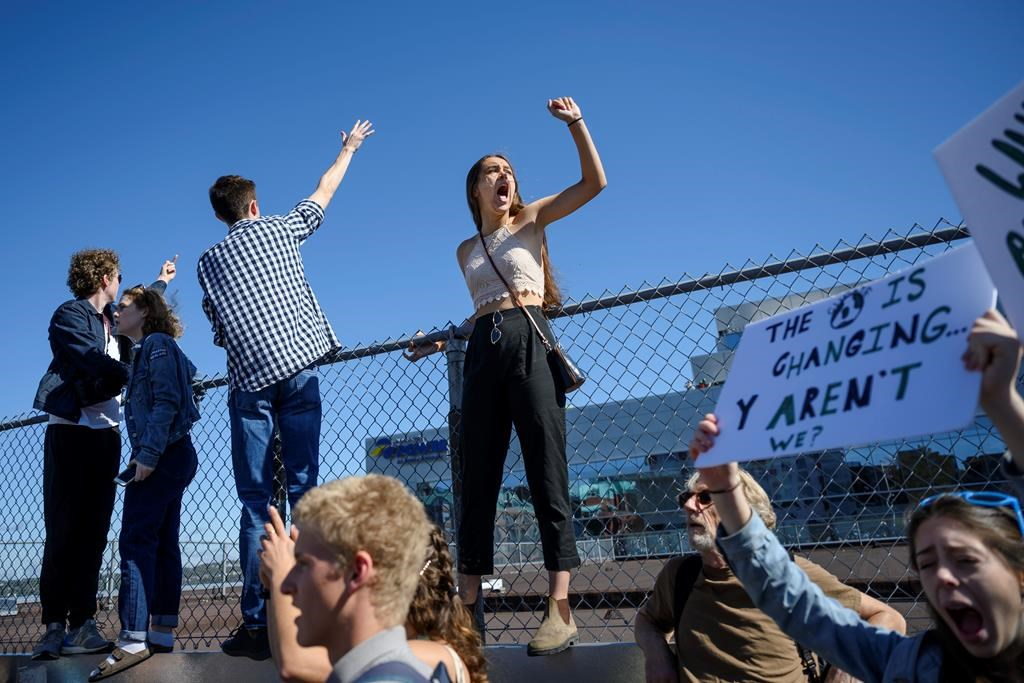 Demonstrators protest in front of Nova Scotia Power during the Climate Strike in Halifax on Friday, September 27, 2019. Photo by The Canadian Press/Darren Calabrese
Previous story
Next story

As 17-year-old Julia Sampson stood amid a climate protest crowd swelling into the thousands, the Nova Scotia organizer said she and her peers are weary of an unresponsive older generation of political leaders in the region.

"The climate crisis is threatening my future, and I want to live," said the high school student, flanked by her friends and fellow organizers Willa Fisher and Emma Goulden — also both 17 years old.

While the Atlantic region is demographically among the oldest in Canada, large numbers of children and young adults attended the region's climate marches on Friday.

There have been a series of scientific predictions of consequences for coastal regions that this generation are expected to face within the prime years of their lives.

For example, a federal study on climate change released this year forecast impacts on Atlantic Canada ranging from a one-metre sea level rise within a century to more intensive hurricanes. Chapter 7 of Canada's Changing Climate Report included predictions of a quadrupling of flooding events along the Halifax waterfront as sea levels rise 20 centimetres by mid-century.

As the march in Halifax began, a crane that was toppled this month by the latest powerful post-tropical storm loomed in the background, closing half the park to the gathering crowd.

Halifax police estimated more than 10,000 people then wound their way through the city, passing by the legislature and ending in front of the city hall.

"This was the largest protest that has occurred in Halifax in recent years .... The protesters have been respectful and peaceful," Const. Amy Edwards of the Halifax police said.

Yet, Sampson and fellow organizers weren't interested in accolades for a well-organized gathering on Friday, saying they'll only be satisfied when words and marches translate into political action.

She's calling for a shift of government support away from offshore fossil fuel industries to renewables, a winding down of carbon-based electrical generation and widespread education on the impact of climate change.

"I'm done with thank yous, I'm done with striking, I'm done. I want to be a normal kid watching Netflix and going out with my friends, but instead I'm spending all of my possible time trying to find any way to make politicians listen," she told the crowd at the end of the gathering.

In Fredericton, the scene also had a strong youth focus.

Pascal Morimanno, 17, marched to the legislature with hundreds of other students from Ecole Sainte-Anne.

Morimanno said he and others were inspired by teen activist Greta Thunberg. "I think she has revolutionized how we look at activism," he said. "She is one person, but there are millions of youth out here now because of her. She is the face of new activism."

Large crowds were also reported at rallies in Moncton and Saint John. In Prince Edward Island — where the Green party is the official Opposition — hundreds gathered in front of province house.

In Newfoundland and Labrador, where the economy relies heavily on offshore oil extraction, young protesters held signs opposing the oil industry. Others had signs indicating they were missing their classes to "teach" political leaders about the urgency of action.

Public consultations on the bill are expected to be completed by the end of this month, but NDP Leader Gary Burrill said discussion on the bill is being rushed without allowing enough time for public input.

New Brunswick Education Minister Dominic Cardy was among the members of the provincial government who turned out to observe the rally in Fredericton. He said no one can seriously argue that climate change is not happening and the debate is now how to address it.

"The area where I always find the interesting discussion, is it through large centralized government programs or the public getting behind developments in the private sector?" he asked.

"That to me is where we should be having the argument and we better have it quickly, because I do agree with the protesters that we don't have a lot of time. We've got to make sure we take action and not just talk."

— With files from Kevin Bissett in Fredericton and Holly McKenzie-Sutter in St. John's, N.L.

By Sidhartha Banerjee | News, Politics | September 27th 2019
Reports from the Race to a Safer World

By Mike Blanchfield | News, Politics | September 27th 2019
Reports from the Race to a Safer World