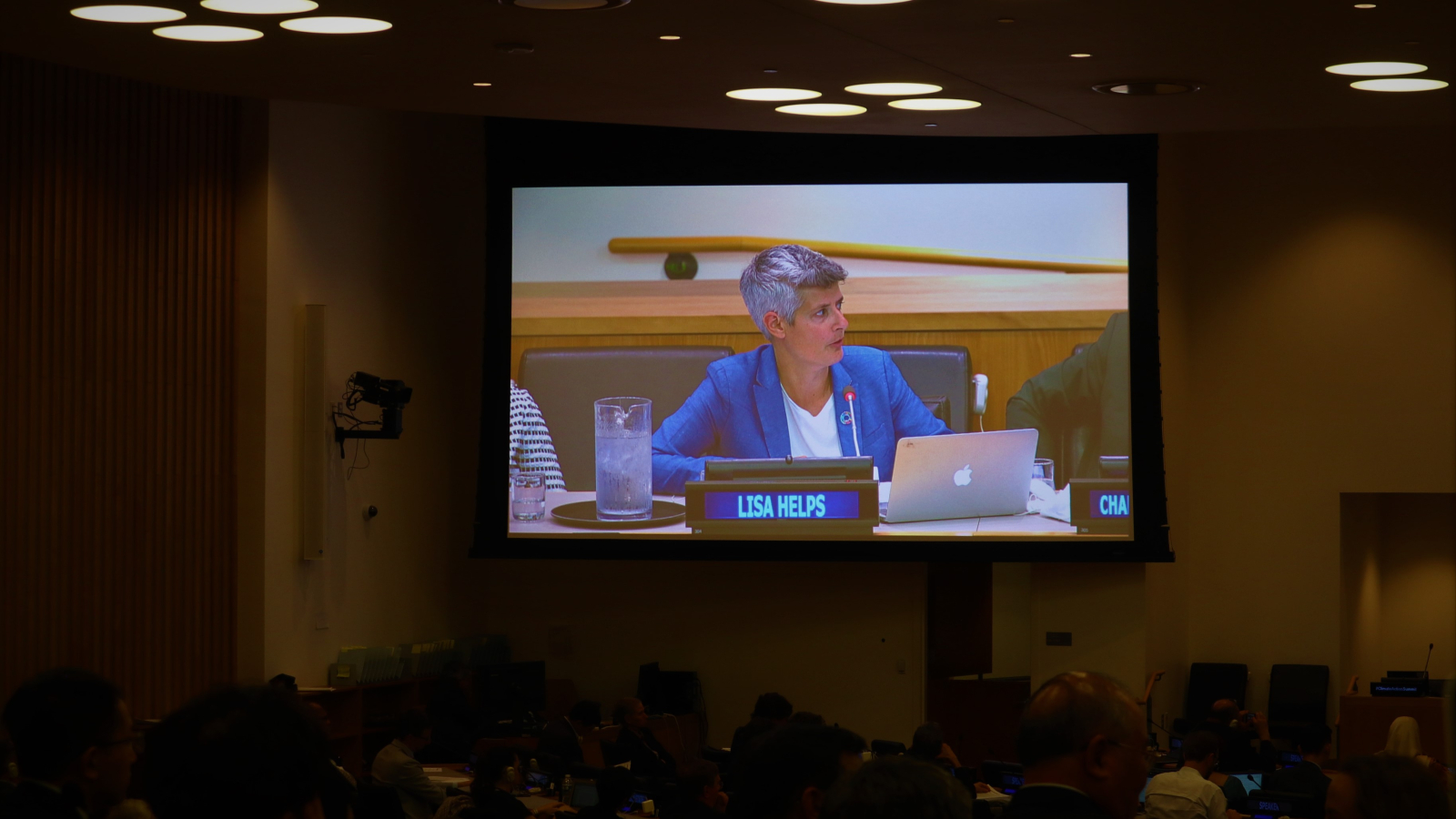 Could a governor of Papua New Guinea and the mayor of Victoria save the oldest, largest tropical forests in the southwestern Pacific from climate change?

It sounds unlikely but that's the very serious conversation Victoria Mayor Lisa Helps found herself having on Sept. 21, at a dinner in New York with a Papua New Guinea governor and Nelson, B.C.’s Councillor Rik Logtenberg.

If the forest collapses in the climate crisis, the people of Papua New Guinea will not be able to survive, the governor told Helps, before making a direct plea for the help of western cities like Victoria and Nelson.

The dinner occurred hours after Helps pledged Victoria as the first Canadian city to participate in the United Nations Trees in Cities Initiative, which challenged mayors of cities around the world to boost their urban forests as a means to lower carbon pollution.

It's not a very ambitious goal, Helps admitted in an interview with National Observer in New York. "But the actual footprint of the city of Victoria is tiny — it's just 20 square kilometers. So 5,000 is a good start," she said. "My hope is that our residents will rally and will be able to plant 10,000 trees in one year."

Helps doesn't know how the city of Victoria and its more than 85,000 residents caught the attention of the United Nations.

But her pledge illustrated the marked shift at the United Nations Climate Summit this year that saw climate leadership represented mostly at the local and sub-national level. Cities, towns and regions around the world took the stage to discuss nature-based solutions and local climate financing efforts, while their federal and national counterparts came later for the UN General Assembly.

According to UN Habitat, cities consume 78 per cent of the world’s energy and produce more than 60 per cent of greenhouse gas emissions. By 2050, cities will be home to two-thirds of the world's population.

So, while Canada's federal leaders took to the election campaign trail at home, mayors such as Helps, Valérie Plante of Montreal, Berry Vrbanovic of Kitchener, Ont. and Naheed Nenshi of Calgary took to the UN to listen, learn and promote best sustainable practices and nature-based solutions in cities.

"Ten years ago, we didn't think cities had the capacity and the ability to solve climate change. This is, I think, a new thing." - Victoria Mayor @lisahelps

Provincial environment ministers from British Columbia and Quebec were also present at the summit to boost their carbon-pricing plans — one of the four key focuses of the United Nations this year.

"One of the key shifts is that cities are now seen as key actors," Helps said in an interview. "Ten years ago, we didn't think cities had the capacity and the ability to solve climate change, This is, I think, a new thing. And it's hopefully not only going to shift the dialogue at the summit, but also shift the kinds of actions that happen coming out of it."

Honoured to present at the UN Climate Summit on a panel Local Leadership for Climate: Solutions to the Climate Emergency. #mayorsbinder #yyj #climateactionsummit pic.twitter.com/q7MRjtpKMF

Helps was only invited a week before the Sept. 21 Climate Summit in a letter that touted the City of Victoria's efforts in improving the management of trees on public and private lands through an annual $1-million investment in an Urban Forest Master Plan.

In 2019, the City of Victoria allocated nearly $3 million to maintain and enhance the city's urban forest.

"I believe there is a lot we can learn from the progress your city has already achieved in this area, and I would like to help you share this achievement with other cities and allow them to learn from it," Under-Secretary-General Olga Algayerova wrote in the invitation.

It was the easiest invitation to accept, Helps told National Observer in an interview at the UN headquarters.

Montreal Mayor Plante was only invited a few days before to participate in a Sept. 23 panel about the role cities could play in the fight against climate change, where she committed to reducing carbon emissions by 55 per cent by 2030, surpassing the UN target of a 45 per cent emissions reduction from countries by 2030.

(The UN seeks to achieve carbon neutrality — the point at which as much carbon is removed from the atmosphere as is added — by 2050.)

"We know the recipe, and we know exactly what to do," Plante told the United Nations on Sept. 23, in a speech delivered in French, asking for the assistance of governments and the private sector to help get cars off the road, make buildings carbon neutral and protect local biodiversity.

After delivering the short speech, Plante told National Observer being the only Canadian leader to speak that day was an indication "cities are at the forefront of the climate crisis" and they were now being invited to the table for the big discussions.

"It was a good time to just be reminded that we have to do better," she said. "It's the most important battle for humanity. So we have to do everything."

Both Plante and Helps said the presence of cities at the summit showed that even though there may be big discrepancies between cities in the global north and global south, the challenges they are all working through are the same: transportation, buildings, waste.

Logtenberg, a rookie councillor from Nelson. B.C., found the summit to be a revelation that cities could be "more effective by operating as an international network."

A tiny city like Nelson, which is prosperous and has plenty of resources, brings climate creativity to the table, but it is being selfish, Logtenberg said.

"If you separate responsibility that we have as cities, in Canada, in the north, we have a responsibility to do everything we can to mitigate the impacts of climate change wherever they are," he said.

Nelson is "prosperous, and successful," he said. "We can experiment, we can take risks we can. And that allows us to be more creative.

But there are other cities feeling the consequences of climate change directly, "and they're really doing everything they can with limited resources." Logtenberg said. He pointed to cities in Ethiopia who had recently committed to planting hundreds of millions of trees.

"That's been a reality check," Logtenberg said. "There's something powerful here about the United Nations plus local governments."

‘Leaving no person behind’

While Helps felt “empowered and bolded” by the climate action taking place in cities around the world, she also made a plea for other levels of government to step up with resources and strong, stable policies.

She told a UN audience only eight cents of every tax dollar Canadians pay go to cities; the other 92 cents go to federal and provincial governments.

“So we need a significant shift in terms of resources, especially if we want urban areas and local governments to help the national and provincial governments meet their targets,” Helps said in an interview. To her surprise, her counterparts from around the world agreed with the need for collaboration.

Before Sept. 20, the biggest strike Ontario NDP leader Andrea Horwath had attended was in 1996, when 100,000 people took to the streets of Hamilton, Ont., to protest cuts made by the Mike Harris government.

The youth climate strike in New York City was bigger (250,000 people) and buzzed with what Horwath described as "a sense of urgency, a sense of commitment and a huge desire for change from all walks of life and all ages and all backgrounds.”

"There's nothing more inspirational than that," she said in an interview during the march. “And that's the kind of fuel you will find pushed people forward on some pretty pretty big changes, right?”

For over a year, Horwath has been battling the Doug Ford government for the widespread cuts it has made to the environment and sustainable-energy policies and projects across the province — without consultation or advance notice.

Along the way, Horwath says, she has learned climate action means “leaving no person behind in the process” — a thinking she says the NDP is applying in its consultations on the first Green New Deal across business, industries, civil societies, environmental groups and youth.

“Climate change is scary,” she said. “So what we need to do is reduce the fear and make some commitments and stick to them.”

‘A platform to convene people’

The amplification of local and subnational governments was the biggest change for Elizabeth Dowdeswell to witness at the UN Climate Summit this year.

The Ontario lieutenant-general and former UN under-secretary-general (and longtime environmentalist) was at the climate summit of her own accord to learn and to boost conversations about sustainability her Queen’s Park office has had with Ontarians during her tenure.

Every week, Dowdeswell tells the story about a person or institution in Ontario trying to be sustainable in a creative, innovative way (some were at the summit this year to participate in solutions dialogues). A running art exhibition in her office called “awakening” includes inspirational messages about the UN’s sustainable-development goals.

Dowdeswell may be apolitical in her role, but she has “a platform to convene people.” And she has convened mayors across Ontario to discuss and boost climate action — something she now sees the UN doing.

The shift has happened in the past decade, she said, when global bodies such as the UN realized so much happens at the city level and many big cities are larger than some countries.

“They’re realizing that if we don't find ways to motivate the activities, the policies, the programs that really matter to people at that level closest to home, then we've missed a significant opportunity,” she said in an interview on some chairs painted with the Canada flag in the UN courtyard.

A very special place for a proud Canadian @CanadaUN pic.twitter.com/qOCBHTarcs

“People often are fond of saying the UN works very slowly and it's only a talking shop,” Dowdeswell continued. “But the reality is that we are global citizens. And if we need some place where we can actually come together, to learn about the issues together, to hear the stories.”

Dowdeswell said this year’s summit “an amazing opportune time” for those who had worked on environmental issues for decades.

“There’s some real momentum building. You can sense it in the atmosphere,” she said.

All the Canadian leaders National Observer spoke to the summit conveyed similar statements. Climate action was no longer limited to the top leaders of the world. Everyone from the youth to local mayors and councillors were implicated.

For Dowdeswell, that meant that Ontario, or any small city or province in Canada, had a place in the world when it came to climate action.

“And one of the places you realize that is here at the United Nations.”