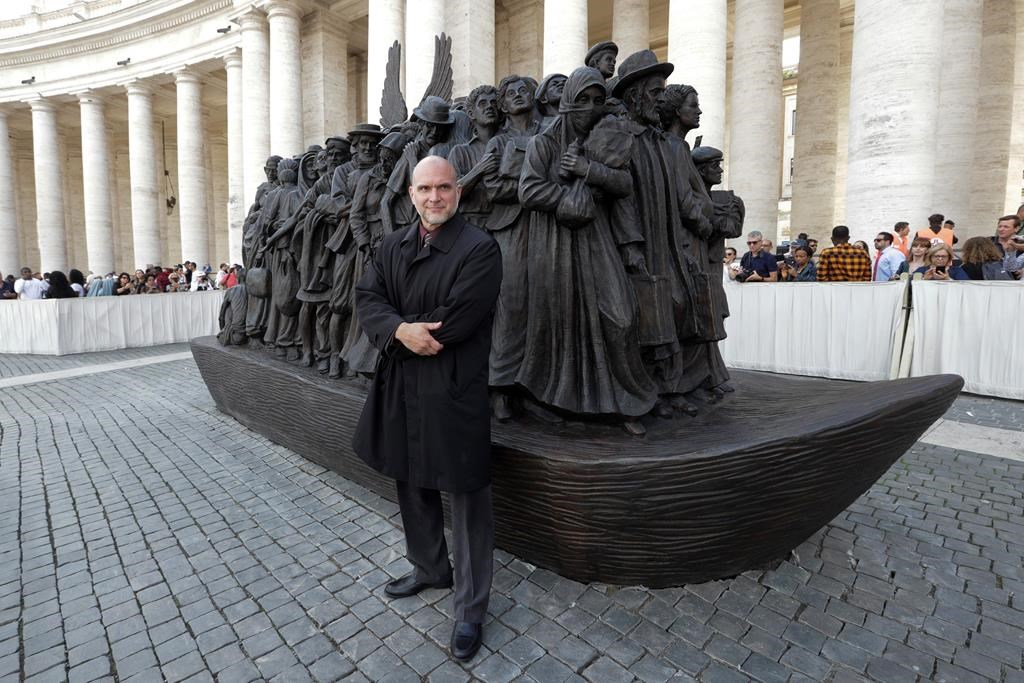 Timothy P. Schmalz poses next to his sculpture on the theme of refugees and migration 'Angels Unawares' unveiled on the occasion of the Migrant and Refugee World Day, in St. Peter's Square, at the Vatican, on Sept. 29, 2019. Photo by The Associated Press
Previous story
Next story

A Canadian artist's sculpture has been unveiled in St. Peter's Square by Pope Francis as part of a Mass for the World Day for Migrants and Refugees.

"I wanted this artistic work here in St. Peter's Square to remind everyone of the evangelical challenge of hospitality," Francis said.

The work in bronze and clay by Timothy Schmalz of Kitchener, Ont., depicts more than 100 migrants and refugees from different cultural and racial backgrounds and time periods.

Schmalz, who travelled to the Vatican City for the unveiling, said it was amazing that the sculpture, called "Angels Unawares," was in the square as a visual reminder that everyone is welcome.

It was inspired by a Bible passage and includes a pair of angel wings rising from among the crowd on a boat.

"The idea is spiritually centred, with the angel wings in the centre," he said. "It brings the idea that we are sacred and we are all, in a sense, worthy of human dignity and respect."

Schmalz said it was an important message to spread as people become more fearful of strangers and isolated by technology.

Schmalz, who described himself as a "hard core Christian," said he got the commission after the Vatican learned of his sculpture depicting Jesus as a homeless person, copies of which are now touring in major cities around the world.

The sculpture for St. Peter's Square was the culmination of well over a year of "obsessive work, obsessive sculpting," with 140 people depicted in the piece, he said.

Schmalz said that while he and Francis did not speak the same language, the pope still gave him a message.

"He looked at me and he put his hands on his heart, and that was more than an artist could possibly hope for."

Many migrants and refugees from conflicts throughout the world attended the mass, which closed with the unveiling of the statue. During the mass, a multiethnic chorus sang and the incense burned came from a refugee camp in southern Ethiopia.

This report by The Canadian Press was first published Sept. 29, 2019.

Canada continues to stand with refugees

I suppose it is inevitable

I suppose it is inevitable that a sculpture installed in the Vatican would be infested with the symbolism of Eurocentric Christianity. Despite the claim that it is supposed to represent all of humanity, most of the faces and garb I can discern have a distinctly Eurocentric cast and the angel references don't resonate with much of the world's population, or its spirituality.

A similarly intended art work should be installed in an appropriate internationally respected institution that is more representative of reality.

There's always someone who

There's always someone who criticizes such art... How about putting yourself in the place of the artist, and making an attempt to imagine his vision? This sculpture originates from his experience and faith, so it's commissioning by the Vatican is only logical. Don't forget that, as is stated in this article, Mr. Schmalz also created the Jesus as a homeless man statue, which is very moving. It's impossible to discuss all this without including details of one's personal faith experiences. However, delving into different world belief systems always reveals the common theme of love.