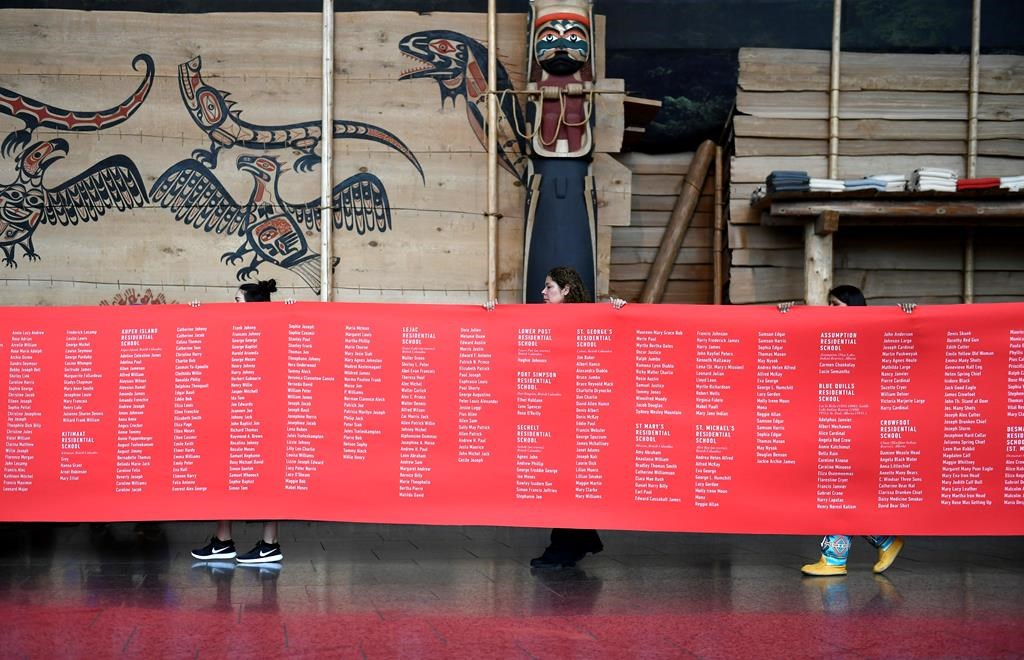 A ceremonial cloth with the names of 2,800 children who died in residential schools is carried to the stage during the Honouring National Day for Truth and Reconciliation ceremony in Gatineau, Que. on Sept. 30, 2019. Photo by The Canadian Press
Previous story
Next story

The list goes on and on — children who died in Canada's residential school system. Child victims being named for the first time.

On Monday, the National Centre for Truth and Reconciliation revealed the names of 2,800 children who died in residential schools during a sombre ceremony in Gatineau, Que.

A 50-metre-long, blood-red cloth bearing the names of each child and the schools they attended was unfurled and carried through a crowd of Indigenous elders and chiefs, residential-school survivors and others.

Many openly wept. Mournful songs performed by Indigenous artists pierced the quiet sadness that hung over the room.

The list has been created to break the silence over the fates of at least some of the thousands who disappeared during the decades the schools operated.

"Today is a special day not only for myself but for thousands of others, like me, across the country to finally bring recognition and honour to our school chums, to our cousins, our nephews to our nieces that were forgotten," said elder Dr. Barney Williams, a residential-school survivor and member of the National Centre for Truth and Reconciliation survivors committee.

"I know that the angels in heaven — the names that are on that list — are certainly smiling down on you and me. Smiling down to know that finally, after all this time, they are not forgotten."

The cloth is the product of years of research conducted on what happened to the many children who were taken into residential schools and never came out. Archivists pored over records from governments and churches, which together operated as many as 80 schools across the country over 120 years. It's the start of meeting one of the 94 calls to action in the Truth and Reconciliation Commission report issued in 2015, which called for resources to develop and maintain a register of deaths in residential schools.

A total of 150,000 Indigenous children are thought to have spent at least some time in a residential school.

"It is essential these names be known," said Ry Moran, director of the National Centre for Truth and Reconciliation, which compiled the list.

The 2,800 are those whose deaths and names researchers have been able to confirm. Moran says another 1,600 also died, but remain unnamed.

Some schools have an extensive list of students who died; some list none. Moran wonders at such large discrepancies.

"Even our recent research efforts have uncovered another 400 students," Moran said. "We know there's many more students to be found."

The age range is wide.

"Infants, three-year-olds, four-year-olds all the way up through their teenage years. We've got some students on this list that are named as 'babies.' "

A number of national Indigenous officials spoke at the ceremony Monday, which felt much like a funeral for the many young victims of abuse and neglect in residential schools.

National Chief Perry Bellegarde of the Assembly of First Nations mourned for the "little ones," many of whom were buried unceremoniously in unmarked graves.

He called the deaths of the children in the schools a "genocide" — echoing the findings of the final report of the national inquiry into missing and murdered Indigenous women and girls, which was released earlier this year.

"The residential-school system was a genocide of Indigenous peoples, First Nations peoples, forcibly removing from their homes and inflicting pain," Bellegarde said during the ceremony.

"We still feel the intergenerational trauma of that genocide. We see it every day in our communities. But now we say there's hope, because it's not just (the term) 'survivors' we want to use. The people are ... thrivers, starting to thrive, becom(ing) proud of who we are as Indigenous Peoples."

But not everyone was feeling so upbeat about the current state of affairs for Indigenous children in Canada.

After all, many are still dying of suicide and from the effects of other systemic mistreatment, Moran said.

"My greatest fear right now, and I think a reality for this country is that there may very well be another day like this in 80 years, remembering the children that are dying today," he said.

Moran noted concerns raised recently by well-known Indigenous advocate Cindy Blackstock, who called for more political attention to a ruling earlier this month from the Canadian Human Rights Tribunal. The ruling found the federal government had been "wilful and reckless" in discriminating against First Nations children living on reserves by knowingly underfunding child-welfare services.

"We live in a country that is still in the midst of a human-rights crisis, profound human-rights violations. We've got to do better and we can do better and I hope that all Canadians feel that, if we get this right, we'll be a better, stronger country," Moran said.

Although the names of the victims unveiled Monday are public, the details researchers have been able to uncover about them will be restricted to families.

The work won't stop, Moran added. The team continues to seek the names of the 1,600 others confirmed dead and to find some kind of resolution for the children who disappeared.

Researchers plan to return to First Nations communities to refine the list, fill gaps, and add as much as they can. Many, many graves need to be located.

They will also try to collect as many and as much of the stories behind the names as they can.

"That is the next phase — making sure that when we remember these children, we bring life to them and help understand what really went on. That's got to be led by the communities and the families. We're there to help."

The work has been difficult and draining — "really, really harsh," Moran added.

Names of children who died in residential schools to be released

So many villains who should

So many villains who should be made to apologize for the Residential schools genocidal history; and most of them are now dead. We can lament, we can acknowledge the racist white supremacy policies that governed Canada (and the US) , but we cannot, and probably will not make restitution, either political, economic or social while we, European settlers, continue to pursue racist policies, discrimination, systemic, ingrained mind sets that cast "people of colour" as others, un-touchables.

Being white, I have come to the conclusion that I cannot impose my culture on these "others". I do not know how to co-exist because throughout my life I have been subtly and overtly influenced to regard them as alien, dust to be swept under the carpet of whiteness. Clearly, such slipshoddy housekeeping has not worked, will never work. After all. in the final analysis we are all dust.