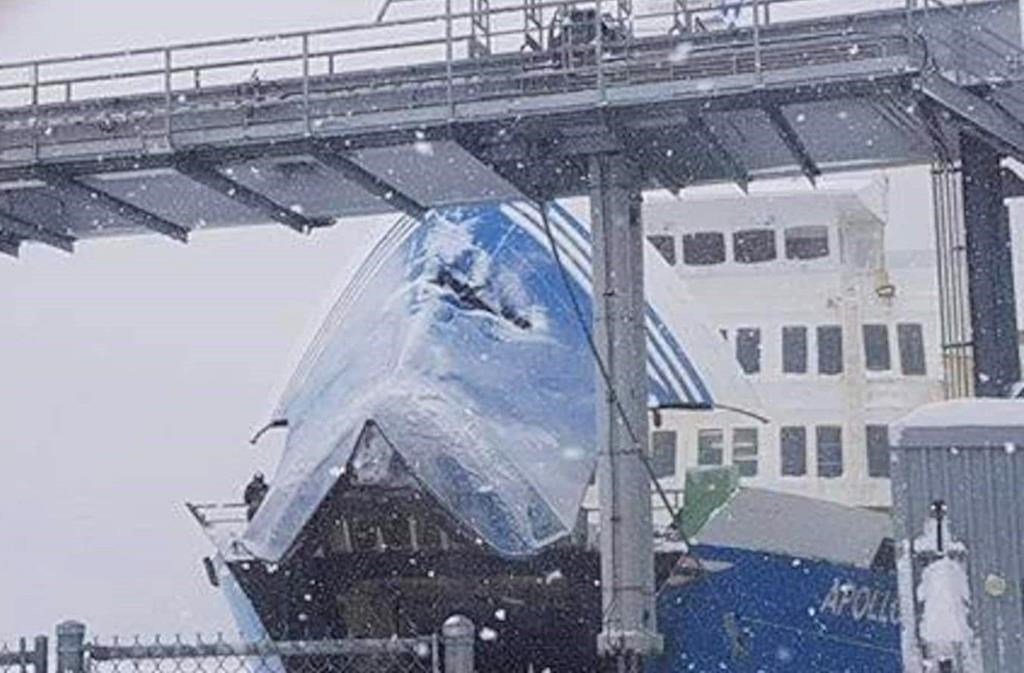 The MV Apollo struck the wharf in Godbout, Que., on Monday, Feb. 25, 2019, leaving a gaping hole in its bow. Handout photo by Michael Bacon
Previous story

A crash-prone ferry whose service life came to an end after it ran into a Quebec wharf this year will be given a new life as a diving destination and aquatic habitat.

The MV Apollo, removed from service last March, will be turned into an artificial reef for scuba-diving enthusiasts in Godbout, Que., on the north shore of the St. Lawrence River.

The municipality says it has concluded a deal with the provincial Crown corporation that oversees ferry service in Quebec and a non-profit organization, the Societe Apollo de Godbout.

The plan is to sink the ship in the bay next summer, once the project has received approval from Transport Canada and Environment Canada.

The Societe des traversiers du Quebec bought the second-hand ferry in January at a cost of $2.1 million to replace the MV F.-A.-Gauthier, which has been out of service for months.

The Apollo had previously been operated by Labrador Marine, sailing between northwestern Newfoundland and Quebec's Lower North Shore.

A pair of collisions in Quebec, one of which left a gaping hole in its bow, ended its sailing life, but the Transportation Safety Board of Canada said it was already badly damaged before the accidents.

The provincial Crown corporation that oversees ferry service in Quebec announced last March the ferry would no longer sail because of the risk of further damage and the cost of repairs. It collided March 16 while docking in Matane in Quebec's Gaspe region, and three weeks earlier it crashed into the wharf in Godbout on the opposite side of the St. Lawrence River.

The agreement announced Monday will see the ship purchased for a symbolic amount, with the Crown corporation kicking in $2 million in preparation costs, which reflects the minimum it would have had to spend to scrap the vessel.

The town says in a statement that in addition to becoming a tourist attraction with significant economic benefits, the sunken ferry will have a positive impact on the environment by creating a new habitat for aquatic fauna and flora.

Local politicians said they hope scuttling the ferry will bring a happy end to the saga.

"We are thrilled to be giving a second life to this ship and to make it a lever for economic and tourism development," Godbout Mayor Jean-Yves Bouffard said in a statement. His counterpart in nearby Baie-Comeau, Yves Montigny, noted "the Apollo's adventure" crossing the St. Lawrence was short-lived but said it now will become an anchor project to benefit the entire region.