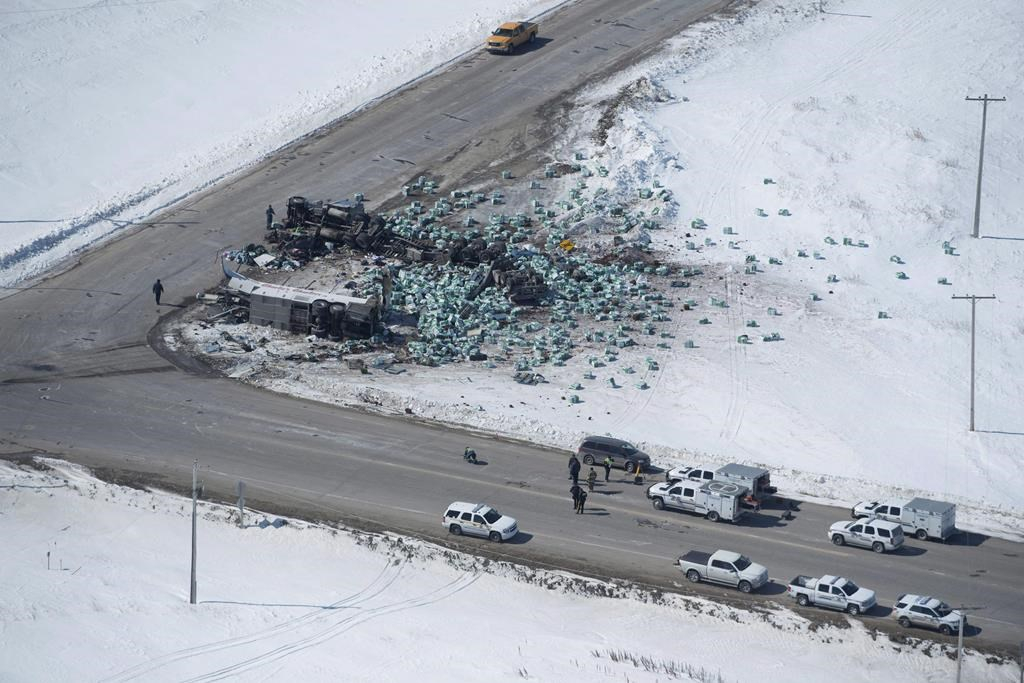 The wreckage of the Humboldt Broncos hockey bus crash is shown outside of Tisdale, Sask., on Saturday, April, 7, 2018. File photo by The Canadian Press/Jonathan Hayward
Previous story
Next story

Several families affected by the deadly Humboldt Broncos hockey bus crash say they are upset by an Alberta review of trucking regulations.

Saskatchewan, Alberta and Manitoba implemented mandatory training for truck and bus drivers after the crash in April 2018.

Alberta Transportation Minister Ric McIver has confirmed in a Facebook post that the province is taking another look at the rules for school bus drivers and farmers.

Families of the 16 people who died and 13 who were injured took to social media to criticize the review, which they called disgusting and ridiculous.

Lethbridge resident Toby Boulet, whose son Logan was killed in the Broncos crash, said the same rules need to apply to commercial and farm drivers.

"It's wrong," he said in an interview with The Canadian Press. "Particularly on the large Class 1 operations that work with the agricultural sector. They are driving on the same roads and highways like Mr. Sidhu was driving on at the crash site."

Jaskirat Singh Sidhu, an inexperienced truck driver from Calgary, pleaded guilty to dangerous driving after blowing through a stop sign at a rural intersection in Saskatchewan and running directly into the path of the hockey team's bus. His training and inexperience were considered factors in the crash.

Boulet said he's trying to move forward from his son's death but the Alberta Transportation review has upset him.

"I thought it was solved, but it's not solved because economics have gotten in the way of lives."

McIver was not made available for an interview, but he said in the Facebook post late Tuesday that the province hasn't made any changes.

"No decisions have been made or will be made until we hear from all interested parties about the best way to proceed," said the posting. "Our top priority at Alberta Transportation is the safety and security of drivers and families on Alberta's highways.

"Let me reassure you that we will not make any changes that compromise safety on our roads."

Premier Jason Kenney made similar comments in Calgary on Tuesday, although both he and McIver suggested the rules for school bus drivers and farmers could be relaxed.

"If a farmer is simply taking their grain truck to the local elevator or perhaps to a regional terminal, and they have a perfect driving record and they're just driving their own product, I think some consideration might be given there, because they're not professional truckers in that case. They're not full-time truckers," Kenney said. "This is a complex issue."

Boulet and the other Alberta-based families involved in the Broncos crash said there's nothing complex about it.

Shelby Hunter, whose brother Logan Hunter from St. Albert, Alta., was killed, called it a terrible idea on Twitter.

"As families, we are after change and I believe one day we will live in a world where driver regulations are much stricter," she wrote. "Breaks my heart to know how many people's lives are at risk on these roads!"

The Straschnitzki family in Airdrie, Alta., has also criticized the potential move in interviews and on social media.

"Typical govt," wrote Tom Straschnitzki on Twitter. "Come visit all 29 of us and explain why they would do this. Hope it never happens to any of their kids or spouses or relatives.

"If it did, betcha changes would happen sooner than later."

— With files from Lauren Krugel in Calgary