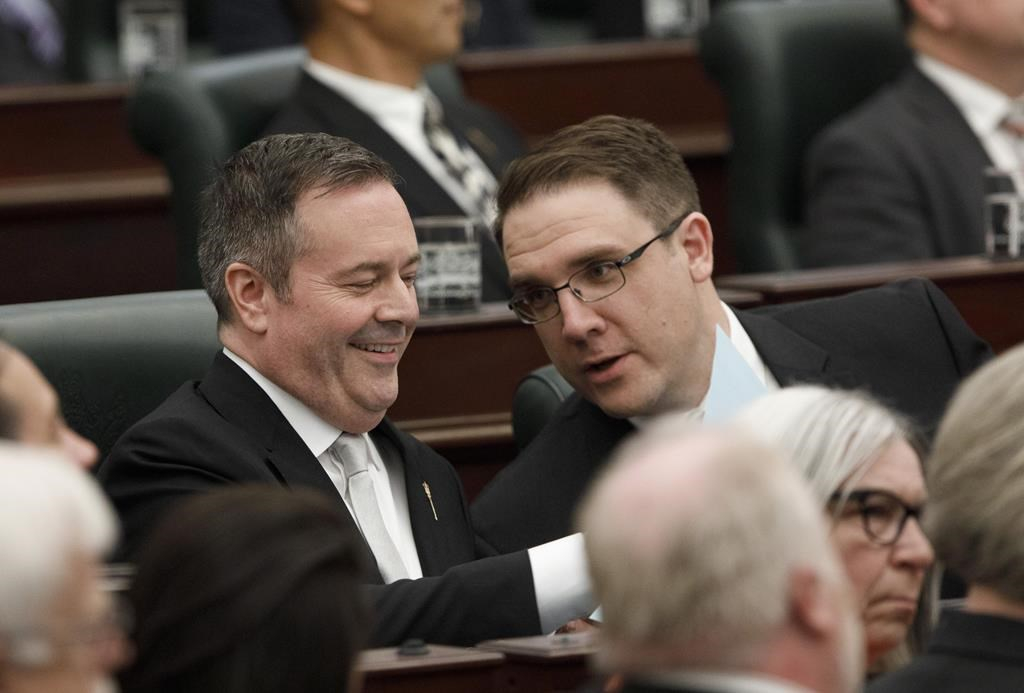 Alberta Premier Jason Kenney and Jason Nixon Minister of Environment and Parks chat before the speech from the throne is delivered in Edmonton on Tuesday, May 21, 2019. File photo by The Canadian Press/Jason Franson
Previous story
Next story

Alberta's politicians return to the legislature chamber Tuesday for a fall sitting expected to be dominated by a budget billed as a fundamental long-term reset of spending priorities.

Premier Jason Kenney has said there will be restraint in the Oct. 24 budget as his United Conservative government works to fulfil its promise to end a recent run of multibillion-dollar budget deficits within four years.

Kenney said the cuts won't be as deep or drastic as the 20 per cent clawbacks under former premier Ralph Klein in the early 1990s.

Nixon said it still will be a challenge.

"Alberta's debt has increased rapidly in the last four years of NDP rule from $13 billion to $60 billion, and we are on track to exceed $100 billion over the next four years," he said.

"This may not be an entirely easy process, but Albertans have given us a clear indication that they expect us to make the tough decisions that will rebuild our province's stalled economy and set the stage for fiscal sustainability for generations to come."

Opposition NDP house leader Deron Bilous said Kenney's government is not only failing on its promise to create new jobs, it's also cancelling or delaying incentive programs to boost existing work in high-tech and other sectors.

Bilous said revenue losses due to steep cuts to corporate taxes passed by the UCP in the spring mean Albertans will have to make up for it in higher tuitions, larger classrooms and higher fees.

"(The government's) first move was a $4.5-billion giveaway to large corporations," said Bilous. "This session we will find out how they plan to make Albertans pay for it, and who will suffer."

Kenney has said the budget will be guided by a panel analysis on Alberta's spending.

The report urges immediate action to reduce spending, along with fundamental reforms in health, education and public sector wages. It also says the government should look at setting salaries across the board for public sector workers, including doctors.

Kenney has not committed to implementing that recommendation, and has said he hopes strategic changes along with attrition in the public service will reduce costs while keeping frontline services intact in key areas.

His government has already taken action on wages, passing legislation in the spring to delay mandated wage arbitration sessions for 180,000 workers, including nurses, social workers and corrections staff.

Nixon said at this point, there is no legislation pertaining to public sector jobs or wages.

"We'll see how the fall sitting progresses and the conversations that will be happening in regard to those types of negotiations. But at this stage there's nothing planned," he said.

Other bills to be introduced include new farm safety rules, replacing legislation passed by the former NDP government.

On the justice side, a bill dubbed "Clare's Law" will allow people at risk of domestic violence to access a partner's history of abuse or violence. Other legislation will hike fines and mandate possible jail terms for protesters who trespass on farms.

Nixon will also bring in rules supporting implementation in the new year of a revised climate levy on large emitters of greenhouse gas emissions, known as the Technology Innovation and Emissions Reduction Fund.

The first piece of legislation will be a bill creating the Aboriginal Indigenous Opportunities Corporation as a Crown entity. The corporation will provide government advice and resources to help First Nations invest in natural resource projects and infrastructure.