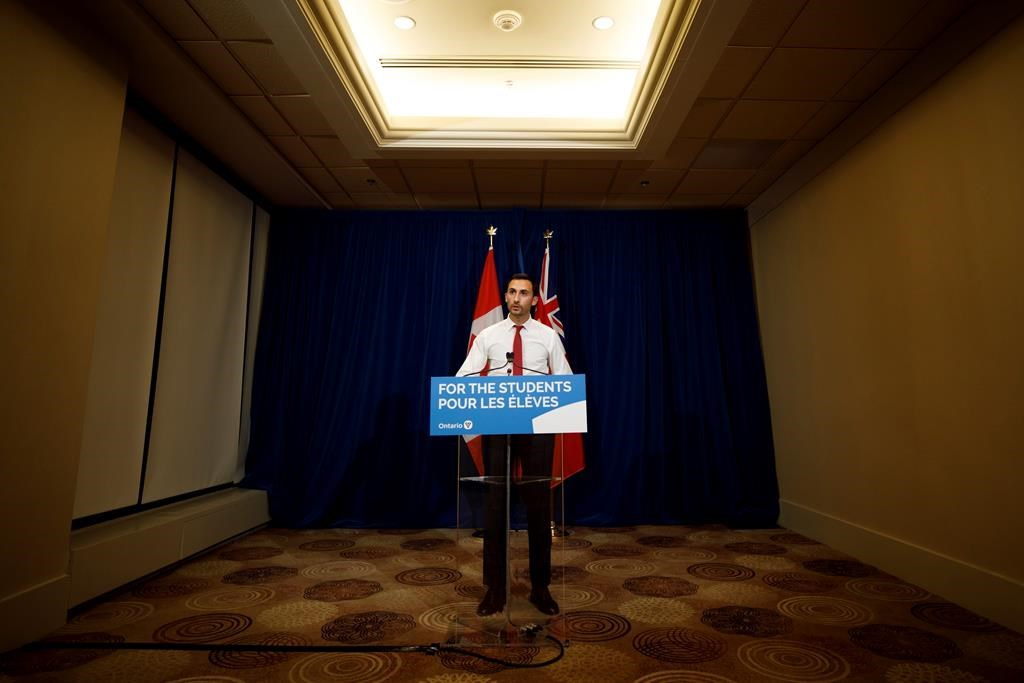 Ontario's minister of education Stephen Lecce speaks during a press conference to announce a tentative deal reached with CUPE in Toronto, on Sunday, Oct. 6, 2019. Photo by The Canadian Press/Cole Burston
Previous story

A strike that would have closed hundreds of schools across Ontario was averted Sunday night as the province reached a tentative deal with the union representing thousands of education workers.

Education Minister Stephen Lecce and the bargaining unit for the Canadian Union of Public Employees announced the deal just hours before a midnight strike deadline.

"All parties bargained in good faith late into the night and over the weekend to reach a deal that is fair and that is reasonable," Lecce said, acknowledging that he would have preferred to have done it sooner.

The agreement comes after weeks of tense contract talks between the government, union and school boards.

In the days leading up to the agreement, CUPE launched a work-to-rule job action and stopped performing a number of extra duties or working overtime to ramp up pressure. Last week, the union issued a formal strike notice.

Neither Lecce nor CUPE went into the details of the accord, but the minister praised it.

"We can all leave this deal knowing we've achieved some incremental success, and that is important for the students of this province," he said.

The president of CUPE’s Ontario School Board Council of Unions said her side made no concessions. The union was able to retain its sick leave plan, achieved a "modest" wage increase and also secured the restoration of a key grant fund for schools across Ontario.

Walton said the agreement will see the Priority School fund restored. That will mean 1,300 to 1,500 jobs which had been cut from the system when the government eliminated the funding late last year, will return to schools, she said.

Her members will benefit from the deal, Walton said, thanking the minister.

"Thanks for opening the piggy bank and allowing us to get the services that we needed for our students," she said. "They'll thank you too."

Lecce said the new deal "strengthens the integrity" of the sick leave program.

Those boards said they would be forced to close their schools during a strike, leaving some parents who were unable to either find or afford additional child care in the lurch.

Premier Doug Ford said the government's goal throughout the talks was to achieve an agreement that "respects taxpayers" and students and their families while recognizing the contributions of education workers.

"Our government worked tirelessly at the bargaining table to achieve this goal and as a result two million students will remain in the classroom where they belong," Ford said in a statement.

CUPE members must still ratify the agreement and the union said voting will take place before the end of the month.

The president of the Ontario Public School Board Association said in a statement Sunday that the deal recognizes the importance of education workers in the system.

"All the parties worked hard together at the table to reach a fair and responsible agreement that will keep students in the classroom," Cathy Abraham said.

Lecce acknowledged that this is just the first deal the province must reach as contract talks between the province and the unions representing both high school and elementary school teachers continue.

"I think there is a pathway forward for all tables," he said. "I appreciate there will be difficulty and the angst parents felt really concerned me. I really feel for them that they had to wait for this. I don't want them in this position at all."

The negotiations are happening as the government has ordered school boards to start increasing class sizes, moving to an average for high school from 22 to 28 students over four years. Class sizes for Grades 4 to 8 will increase by one student per classroom, from 23 to 24.

NDP leader Andrea Horwath said that while the government narrowly avoided school closures parents still spent an "unnecessarily stressful weekend" worrying about the talks. That won't change if the government doesn't reverse cuts it's made to the education system.

"As long as the deep Conservative cuts continue we can expect more chaos in our classrooms," she said in a statement.