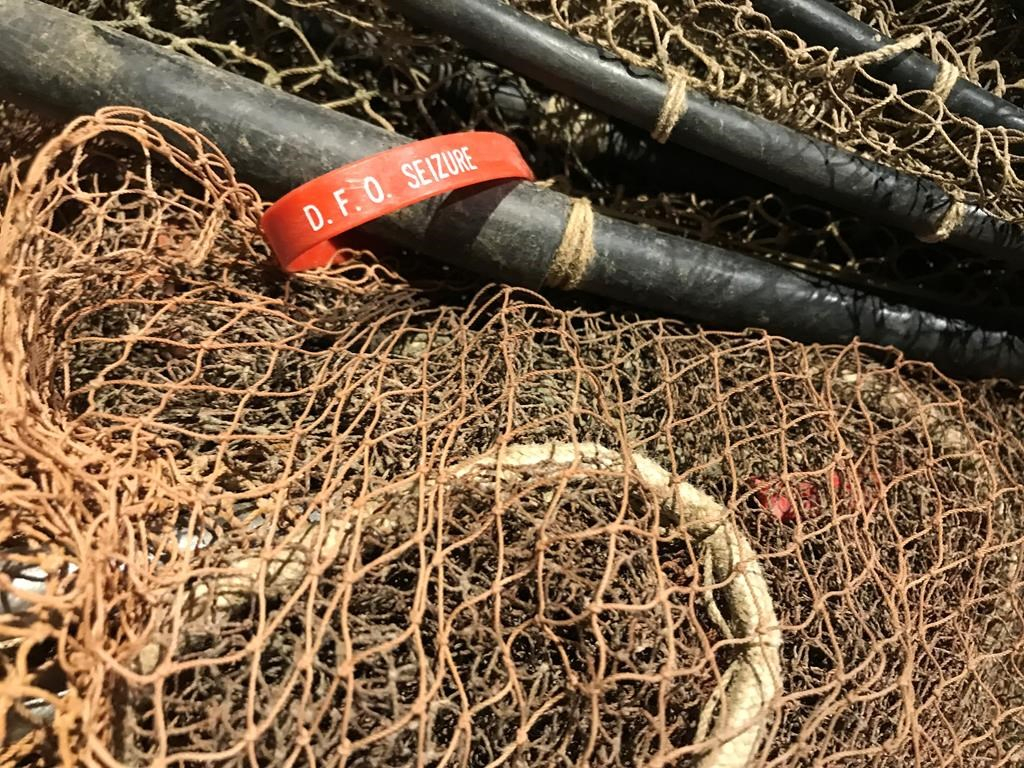 A department of Fisheries and Oceans seizure tag is seen on eel netting belonging to Donald Marshall Jr. in an undated handout photo. Handout photo by Jeff Ward
Previous story

The recovery of eel nets that helped confirm Aboriginal rights to earn a living from fishing is bringing back powerful memories for those closely touched by the story they evoke.

Donald Marshall Jr. was charged with three counts of violating federal fisheries laws when he and his former partner Jane McMillan set the nets near Pomquet Harbour, N.S., in 1993.

The seizure and the storage of his gear took Marshall all the way to the Supreme Court of Canada, where judges upheld treaties from the 1760s they interpreted as meaning Mi'kmaq can earn a moderate living from hunting and fishing. A subsequent decision stated the fishery could be regulated, if justified for conservation or other important public objectives.

Marshall died in 2009 at the age of 55, unaware his historic nets were still locked away, though he'd requested their return.

A portion of the long, bag-shaped fishing net — held open by hoops — was first noticed by a fisheries researcher employed by the Confederation of Mainland Mi'kmaq while she was doing a tour of a federal office earlier this year.

After further inquiries, Fisheries and Oceans began a process to release the seized items and return them to Marshall's family in Membertou — leading to a restoration plan and their placement with the Membertou Heritage Park.

Jeff Ward, manager of the park, said texted images of the recovered nets were received on Sept. 14, setting off excitement at his office.

"It was like discovering the Holy Grail," he said in an interview.

McMillan says when she attended a conference marking the 20th anniversary of the Marshal decision, she found herself "surprisingly emotional" as she smelled and touched the salty nets.

The mends in the mesh brought memories of how she and Marshall would fix each tiny tear, knowing even a small hole meant their catch could slip away.

"Having had success as an avid food harvester, Donald wanted to secure an income through an activity he enjoyed, one that allowed him to celebrate his Mi'kmaw identity through a respectful relationship with a cultural significant resource," she wrote.

"It was hard and dirty work, but we liked the adventure. Every time there was a thunderstorm, Donald rubbed his hands together and said, 'Lots of eels tomorrow, baby!' He was right."

The eel is a traditional food adored by the elders, and Marshall, the son of a Mi'kmaq grand chief, would occasionally donate his slippery, oily catch for stews and other dishes.

Marshall — well-known for having been wrongfully convicted of murder in the early 1970s — had become an eel fisherman in part to step away from the public limelight his case had created, said McMillan.

The couple had bought the nets in 1993 after a year of borrowing nets and saving their money. They'd spent their first year in Cape Breton rivers, but shifted south to Antigonish county, to the Paq'tnkek Mi'kmaq territory near Antigonish.

It was there that a fisheries officer asked Marshall for his licence on a clear morning in August 1993.

According to McMillan's book, Marshall replied, "I don't need a licence. I have the 1752 treaty."

On Aug. 24, 1993, Marshall sold about 463 pounds of eels for $1.70 per pound to a New Brunswick buyer. However, after he and McMillan reset the nets, fisheries officers seized the gear and laid the charges.

McMillan, now a professor of anthropology at St. Francis Xavier University, said the seizure changed both legal history and their personal lives.

"It was devastating to us because it absolutely interfered with our ability to earn a livelihood ... It was a pretty horrible day," she recalled.

If the nets hadn't been taken, "they would have lasted for many years," she said.

The seizure soon set off the "public, expensive and lengthy" court battle that started on Oct. 17, 1994 in a provincial court, with Marshall receiving the financial backing and historical records gathered by the Union of Nova Scotia Indians and the Confederacy of Mainland Mi'kmaq.

In her book, McMillan notes the Mi'kmaq groups were well prepared for the legal battle, having compiled historical documentation to aid in legal defence work for the protection of treaty rights. "They were ready for a fight," she wrote.

After losing the initial appeals, the Sept. 17, 1999 Supreme Court decision said that Marshall's treaty right included a "moderate livelihood" by fishing for eels.

"The case marked an unprecedented turn in colonial relations: it opened a window to remedy patterns of dependency and subjgation in favour of sustainable community advancement, and a return to the principles of 'netukulimk' (responsible harvesting)," wrote McMillan.

McMillan said she's hopeful that the nets will be one more piece of Marshall's already potent legacy.

By The Canadian Press in News, Politics | July 22nd 2019
Race Against Climate Change