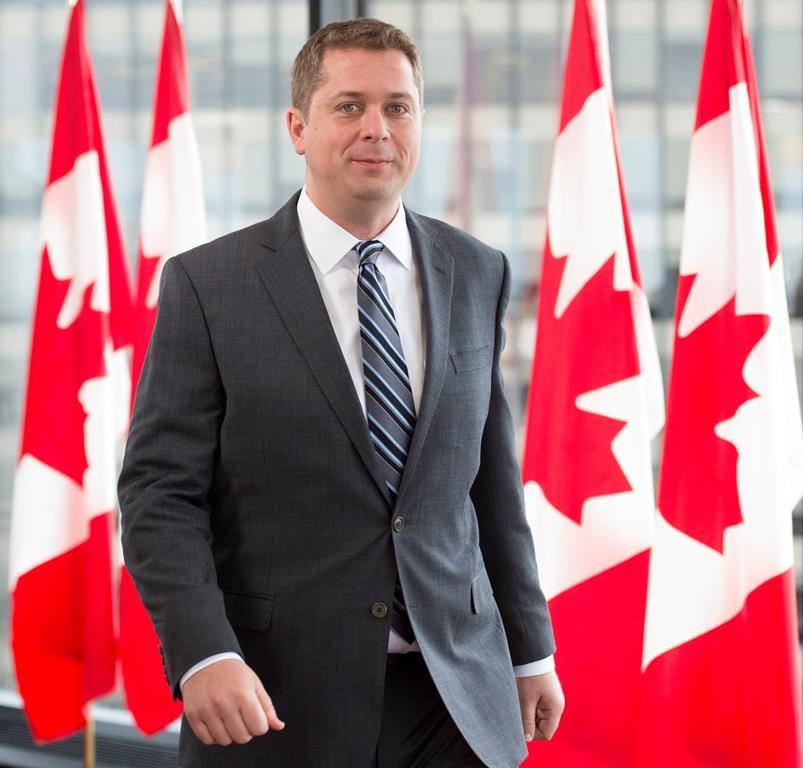 Trudeau fired back at Scheer at an event with local teachers, where he tried to highlight the ongoing tension between Ontario's education workers and the government of Premier Doug Ford.

The early-morning skirmish marked what was otherwise quiet day on the campaign trail as all the party leaders prepared for the evening's national English-language debate.

Trudeau started the day at a Boys and Girls Club in Ottawa, saying that as a former teacher he understands that the education policies of the Ford government "are impacting not just teachers in schools but kids and families as well as the future we are building."

The event was planned before a last-minute deal was reached Sunday night between the Ontario government and education support workers represented by the Canadian Union of Public Employees. The agreement averted the closure of hundreds of the provinces elementary and high schools Monday morning.

Trudeau has repeatedly tried to link Scheer to Ford, to appeal to Ontario voters who may be having second thoughts about electing a Conservative government. Scheer hasn't campaigned with Ford so far, including during stops in the premier's own riding, and instead has enlisted Alberta Premier Jason Kenney to help pull in Conservative votes in Ontario.

Trudeau has issued repeated warnings that Scheer will make cuts to important services just like Ford has done in Ontario. Recent changes made by the Ford government have increased class size limits in Ontario to save $2.8 billion over the next five years. As a result, the province's Financial Accountability Office said by 2023-24 there will be 10,000 fewer teachers in classrooms than if class sizes had not been increased.

"The reality is the cuts Doug Ford has already brought in to education are being felt right across the province," he said. "Right now we're in an election where the option is to double down on Conservative approaches which always cut services, looks for austerity and gives tax breaks to the wealthiest instead of to everyone else.

Scheer was having none of it Monday, and said he thought Trudeau was probably the only parent in Ontario that was disappointed by the strike not going forward.

"It's quite disgusting that he was trying to politicize kids' education for his own personal partisan gain.

Trudeau said the federal government has increased federal child benefits, reduced child poverty and invested in communities, "but we need to have partners at the provincial level willing to invest in kids as well and what these kids don't need is to have a partner at the federal level that is cutting for them as well."

Some Conservatives on Sunday were accusing the Liberals of trying to interfere with the process by convincing their union friends not to agree to a deal. Scheer said neither he nor his campaign had any conversation with the Ontario government about reaching a deal in order to prevent an education strike in the middle of his bid to become prime minister.

Monday's debate is considered a critical appearance for all the leaders in a campaign that has seen little movement in the polls since it began on Sept. 11.

Trudeau could find himself on the defensive, facing attacks on his record from all sides.

For Scheer, it will be the first time he shares the stage with Maxime Bernier, who left the Conservatives in 2018 to start up his own People's Party of Canada. Bernier was not invited to either a Maclean's magazine debate in the first week of the campaign nor a TVA French debate in Montreal last week.

He presents a possible wild card for Scheer in the debate as he tries to attack disgruntled Conservative voters. Scheer dismissed the idea he has any concerns about Bernier's presence.

"That changes nothing for me, because I am always there to replace Justin Trudeau," he said.

Scheer is coming off what was deemed a weak performance in the TVA debate last week that some Quebec pundits think harmed Conservative fortunes in that province.

Leaders don't usually reveal new policies or promises in a debate but how they come off when facing opponents directly can buoy or sink a campaign.

The dynamic could also be interesting between NDP Leader Jagmeet Singh and the Greens' Elizabeth May, who appear to be fighting for third place.

The Bloc Quebecois' Yves-Francois Blanchet has little to gain or lose in front of a national audience primarily of English-speakers.

This is the first of two debates taking place this week in a theatre at the Canadian Museum of History in Gatineau, Que., with a French-language version coming Thursday.

— With files from Lee Berthiaume.