How an Ontario municipality cut trucking pollution without investing in infrastructure 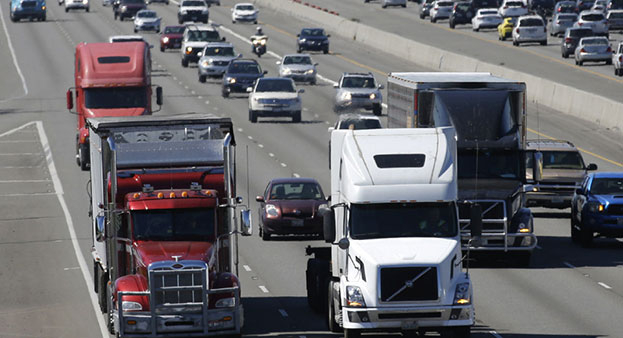 Transportation is the second-highest source of Canada’s greenhouse gas emissions, making up 24 per cent of GHG emissions in all economic sectors in 2017. Freight transportation represented 41 per cent of that. Photo from OTA
Previous story
Next story

A regional government in Ontario has tested a way to increase cargo efficiency while helping reduce carbon emissions, without spending a cent on building new infrastructure.

At the end of August, the Region of Peel, which includes the municipalities Brampton, Mississauga and Caledon, completed a pilot during which trucks made deliveries outside peak congestion hours. Initial findings show delivery time decreased by an average of 17 per cent per trip, and 23 per cent of trucks were moved off the road during peak hours.

“So many cities have our same conundrum. They are continuing to grow and there’s no money for more cargo infrastructure,” Nando Iannicca, chairman of Peel Regional Council, said in an interview. “We’d better take advantage of the infrastructure that we have.”

With greater demand for faster shipping and home deliveries, more delivery vehicles are being added to already congested roads. There are more than 2,000 trucking companies in the Region of Peel alone, with an estimated $1.8 billion in goods travelling through the region each day.

The Smart Freight Centre launched this year to research the movement of goods in Peel and the Greater Toronto and Hamilton areas. In Peel and elsewhere, off-peak delivery (OPD) is one way municipalities are reducing their carbon footprints without having to make huge investments in infrastructure.

There are a number of reasons for this, said Carolyn Kim, director of transportation and urban solutions at Pembina Institute, a Canadian independent think tank that researches climate policy and clean energy.

“We’re not seeing the efficiency gains in the freight sector as fast as those that we’re seeing in passenger transportation,” Kim said.

“With the rise of e-commerce and online shopping, same-day deliveries, consumer preferences have changed around fast, convenient, free shipping. We’re seeing more and more trucks on the road,” she said, adding Peel’s pilot “is a really great example of municipalities implementing innovative ideas to address what’s happening on the ground.”

During the recent six-month pilot, three retailers — Walmart Canada, Loblaws Inc. and LCBO — delivered to select stores outside the hours of 7 a.m. to 7 p.m.

With greater demand for faster shipping and home deliveries, there are an increasing number of trucks adding to already congested roads. There are more than 2,000 trucking companies in the Region of Peel alone.

“The initial results look promising,” Matthew Roorda, a University of Toronto engineering professor and chairman of the Smart Freight Centre, said, noting they are still finalizing the data. The centre is a collaboration between Peel, U of T, McMaster University and York University.

Globally, OPD experiments have been conducted since at least 1984, when the strategy was used at the Los Angeles Olympic Games. The results were so encouraging that the local government aimed to continue the program after the Games. Since then, major international athletic competitions have been laboratories for similar initiatives — the Olympic Games in Vancouver in 2010, the London Olympics in 2012, the 2015 Pan Am/Parapan Am Games in Toronto. All yielded positive results.

Barcelona tested OPD in 2003, eventually leading to more than 400 supermarkets in Spain adopting the strategy as of 2010. New York City also tested OPD from 2009 to 2010 and found it made deliveries quicker while reducing travel time and fuel expenses.

The chief drawback of OPD is noise. The Peel pilot paid attention to the problem, conducting a study both before and after the experiment.

“There was not a single noise complaint about these truck deliveries at nighttime,” said Sabbir Saiyed, Peel’s manager of transportation system planning.

He said they chose locations away from residential areas, and used the time window between 7 and 11 p.m. as efficiently as possible to avoid deliveries going late into the night.

Kim noted there are additional ways to make deliveries even more efficient — by using low- or zero-emission vehicles,for example. IKEA has announced it will use electric vehicles for deliveries in five cities by 2020.

As for Peel, the final results of the pilot are expected to be published by the end of the year. In the meantime, the region has voted to allocate $240,000 per year for the next four years to the Smart Freight Centre.

Saiyed said they would eventually like to expand the program to full time, and they’re in talks with other municipalities (including the City of Toronto) as well as the provincial and federal governments.

“Our goal is definitely to expand it to the entire GTA and Hamilton areas, and even to get more municipalities and more regions on board,” he said.

Iannicca added the region hopes to continue discussing innovative ways to make deliveries more efficient — through drones, for example. He will also travel to the United States and Europe to talk more about the OPD program, which he said has been catching interest.

“It’s remarkable in its simplicity,” Iannicca said. “So many of the pieces there were waiting to be brought together.”

Editor's note: This story was updated on Oct. 10, 2019 at 1.35 p.m. to correctly identify that Nando Iannicca's quotes were from an interview and not a council meeting. We regret the error.

I recall during the Atlanta

I recall during the Atlanta Olympics staggered work hours reduced traffic congestion. Another option to consider.