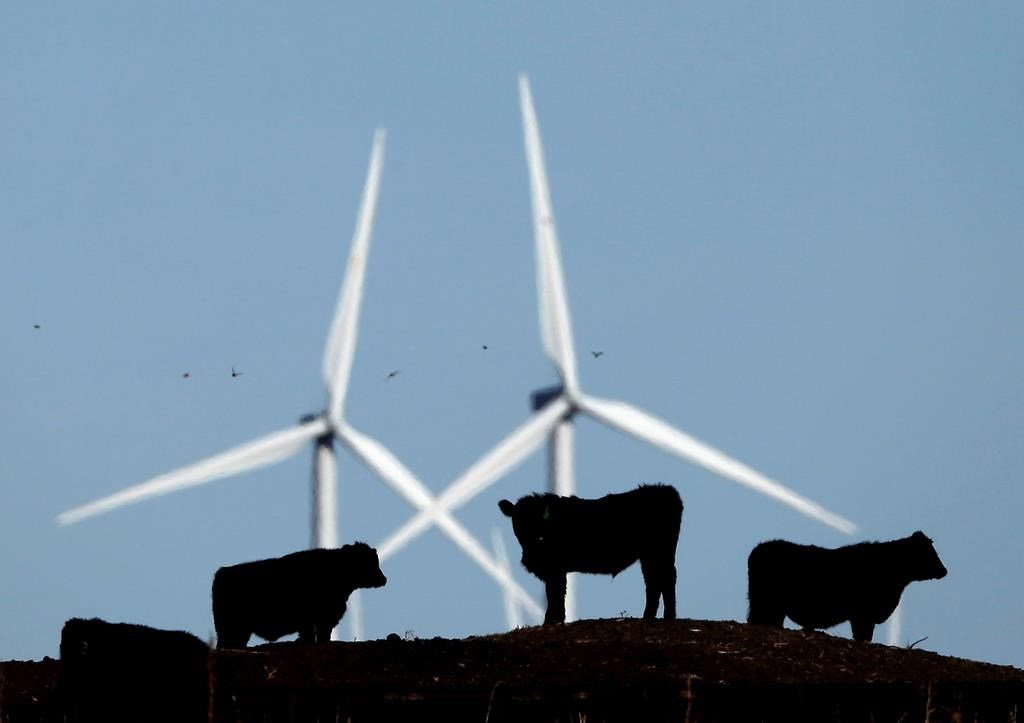 In this Wednesday, Dec. 9, 2015 file photo, cattle graze in a pasture against a backdrop of wind turbines which are part of the 155 turbine Smoky Hill Wind Farm near Vesper, Kan. File photo by The Associated Press/Charlie Riedel
Previous story
Next story

The president of the Canadian Wind Energy Association says the industry has proven that wind can compete on price with other sources of electrical power but now it must prove it can be just as reliable.

Addressing the opening session of the 35th CanWEA annual wind energy conference and exhibition in Calgary, Robert Hornung said that is why next year's conference will switch to a new format in which wind, solar, storage and other renewable technologies will get equal billing.

He says it's also why members of CanWEA and the Canadian Solar Industries Association will vote in late November on a motion to merge the two organizations, thus promoting the benefits of wind, which tends to generate most of its power at night, and solar, which works only during the day.

Electricity analyst Kathleen Spees, a principal with The Brattle Group, says the wind energy sector has had setbacks recently with the cancelling of programs designed to guarantee rates for renewable power projects by new governments in both Alberta and Ontario.

But she says she's optimistic about the medium- and long-term outlook for renewables because electrification in Canada is the only "known, feasible, cost-effective path" that will allow the country to meet its goal to drastically cut greenhouse gas emissions by 2050.

She says that level of electrification will likely mean doubling the country's electrical capacity.

"The shape of the future will be anything but circular — instead it will be triangular, with wind energy, solar energy and energy storage each making up one of the three sides," said Rochelle Pancoast, chair of the CanWEA board, in a speech.

"This reflects the fact that integrated, complementary and multi-technology approaches will drive the successful delivery of clean and reliable energy solutions going forward."

This report by The Canadian Press was first published Oct. 8, 2019.

This is very good news

This is very good news because power storage is key to flattening the peaks and valleys of the intermittency that constrains solar, wind and tidal power. Very high storage capacity, superb efficiency and longevity are also key.

Liquid metal batteries show a great deal of promise for stationary, scalable power because they use widely available, affordable materials such as magnesium, aluminum and salt. Large-scale storage would exclude lithium due to its supply limitations and subjectiveness to troubling instability and human rights violations in the mines of undemocratic nations where lithium deposits are often found. Because of its constraints lithium is best confined to non-grid connected transportation such as personal cars and commercial trucks, and to electric devices. Trying to store electricity at an industrial scales throughout the world with lithium would help bring about a shortage in supply and major price spikes.

The model under development by Canadian scientist, Dr. Sadoway at MIT, a product they intend to commercialize in a couple of years under the name Ambri, is generating immense interest by investors like Bill Gates and renewable energy advocates.

What is really needed is for the fossil fuel companies who are running fledgling parallel renewable energy programs and public provincial utilities to seize technologies like this as soon as they are released and run with them, scale them up, drive down the cost of renewables even more with stable base load stored power on demand, and change the fossil fuel political hierarchy forever to benefit civilization. This will no doubt become a very profitable enterprise as well.