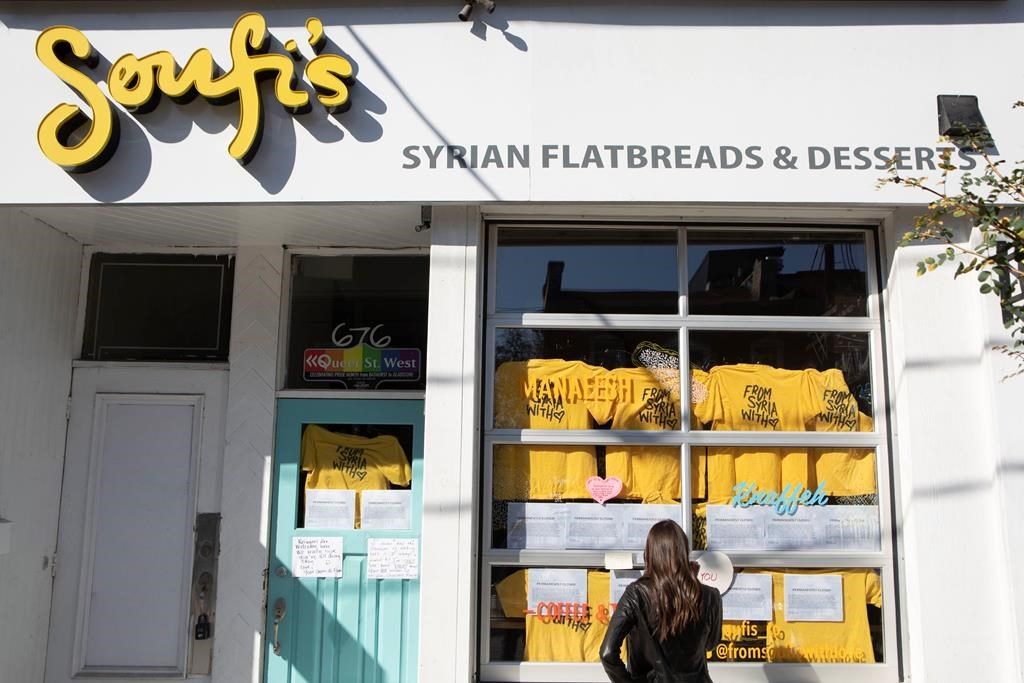 Notices of closure are taped to the window of Soufi's restaurant in Toronto on Wednesday, October 9, 2019. File photo by The Canadian Press/Chris Young
Previous story
Next story

A Toronto family who said it was forced to close their popular Syrian restaurant after receiving a series of hate messages and death threats has filed a complaint with city police, the force said Wednesday.

Const. Victor Kwong said investigators met with members of the Alsoufi family and are launching an investigation. He did not disclose details of the allegations contained in the police report.

"As we speak, officers are over there taking a full report from them and starting the investigation," Kwong said in a telephone interview.

The complaint comes a day after the family announced they were closing Soufi's restaurant, a Syrian eatery in the downtown core that had enjoyed local and international plaudits until the past two weeks.

But ever since a member of the family protested against a political event featuring People's Party of Canada Leader Maxime Bernier late last month, the family said they've been dealing with a number of hateful messages and active threats that prompted them to close the restaurant for the safety of all staff.

"As a result of numerous hate messages and death threats we've received over the past week, we've decided to permanently close our shop," a post on the restaurant's Instagram account reads. "Our decision is made with a heavy heart in effort to maintain our family and staff's safety."

The restaurant had recently earned a national profile after the Sept. 29 discussion in Hamilton featuring Bernier, which drew a vocal crowd of protesters.

Several media reports say a now-deleted Facebook post indicated the owner's son had been among those attending the demonstration, and that he regrets not stepping aside or intervening when an elderly woman was blocked from entering the event and verbally harassed.

Toronto police had previously said officers received a call from a member of the family on Oct. 2 indicating they wished to file a formal report about hate speech and threats.

They said no one was at the restaurant when officers attended the scene, and they have not been able to reconnect since.

Prior to its closure, Soufi's had earned a reputation as both a local hot spot and a success story tied to the influx of Syrian refugees that have arrived in Canada in recent years.

According to a New York Times profile of the restaurant published in 2018, the business was operated by a mother, father and two children in their 20s. The elder of those children was the one owners claimed attended the Bernier event as a protester, according to media reports.

The demonstration became a lightning rod for criticism when video footage surfaced showing masked protesters blocking an elderly woman with a walker from entering the event at Hamilton's Mohawk College.

Hamilton police say they're actively investigating the events around the Sept. 29 appearance, but have not laid any charges.

Toronto Mayor John Tory said Wednesday that he is "heartbroken" over the Alsoufi family's ordeal.

"I sincerely hope the family will reconsider and reopen the restaurant because we support them, we will continue to support them, and the best way to fight this kind of hate is to support them and their business," Tory said in an email statement.