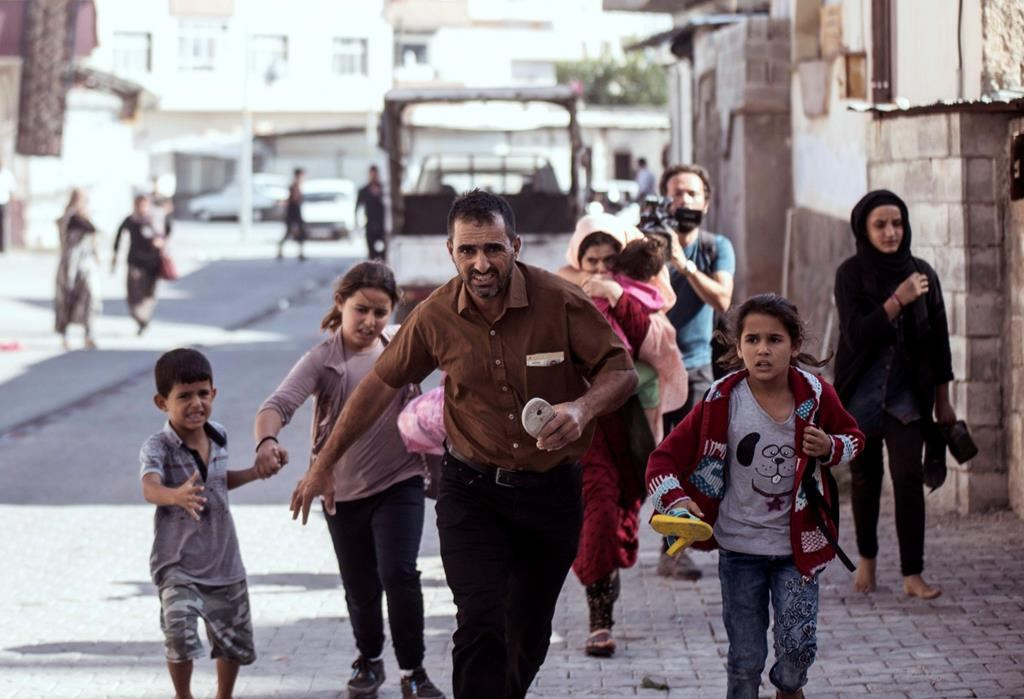 People run to take cover after mortars fired from Syria, in Akcakale, Turkey, on Thursday, Oct. 10, 2019. Photo by The Associated Press/Ismail Coskun/IHA via AP
Previous story

At least 25 "innocent" Canadian children are trapped in a refugee camp not far from where Turkey has launched a military offensive in northeastern Syria, an international charity said Thursday as it called on Ottawa to act now to rescue them.

Save the Children Canada, which has aid workers on the ground in Syria, said the kids are largely the offspring of Islamic State militants, and some of them are orphans, while others have only one parent.

"We believe they should be brought home and kept safe."

The children are largely based in Al-Hawl, a refugee camp about 100 kilometres southeast of the border region where the Turkish incursion is underway. Many of the children have family members in Canada, Chambers said.

Turkey began a military offensive Wednesday into northern Syria against U.S.-backed Kurdish-led fighters of the Syrian Democratic Forces who are holding more than 10,000 Islamic State militants, including some 2,000 foreigners. There are over two dozen detention facilities in northeastern Syria.

Turkey's president said Thursday his country would keep in custody Islamic State fighters who should be jailed while deporting others to their countries of origin — if they could accept them. Recep Tayyip Erdogan said women and children of the Islamic State group would go through "a rehabilitation program."

Chambers said other counties such as Belgium, Italy, Australia, Germany and Denmark have all repatriated children caught up in the long-running conflict.

He said Save the Children has been in touch with the offices of Foreign Affairs Minister Chrystia Freeland and Public Safety Minister Ralph Goodale over the years about the fate of the Canadian children in Syria, but nothing has changed.

Freeland on Wednesday condemned the Turkish incursion, saying the actions risked exacerbating the humanitarian problems that already exist in Syria.

Chambers said the three main camps where the children are held in northeastern Syria have not yet come under attack, but that could change.

"The situation is only going to get worse and some of (the children) really need both physical and mental health help," Chambers said. "They are traumatized and have lived a completely insecure life."

The conditions in the camps are dire, he added.

"There's no health care to speak of, there isn't enough water, there's malnutrition, what education there is rudimentary and not something that will provide a future for anyone and that's before any of this happened," he said.

"It's really a dreadful place to be a child. The worst."

Bessma Momani, a professor of international affairs at the University of Waterloo, said all the children staying in camps in Syria need to get out.

"The camp conditions are certainly radicalizing the children, so the sooner we get them out, the better," she said.

Momani said the Turkish incursion is just the beginning as she expects Turkey will try to control a corridor along the border that is free of Kurds. The assault could last for months, she said.

"We need the world to open its eyes, but nobody cares," he said in an interview.

The internet and phone lines have been taken down and Kurds in Canada cannot contact their family and friends in Syria, he said.

"It's just more Kurdish blood being spilled and no one will do anything," Kaya said.

Are we turning our back on Syria?