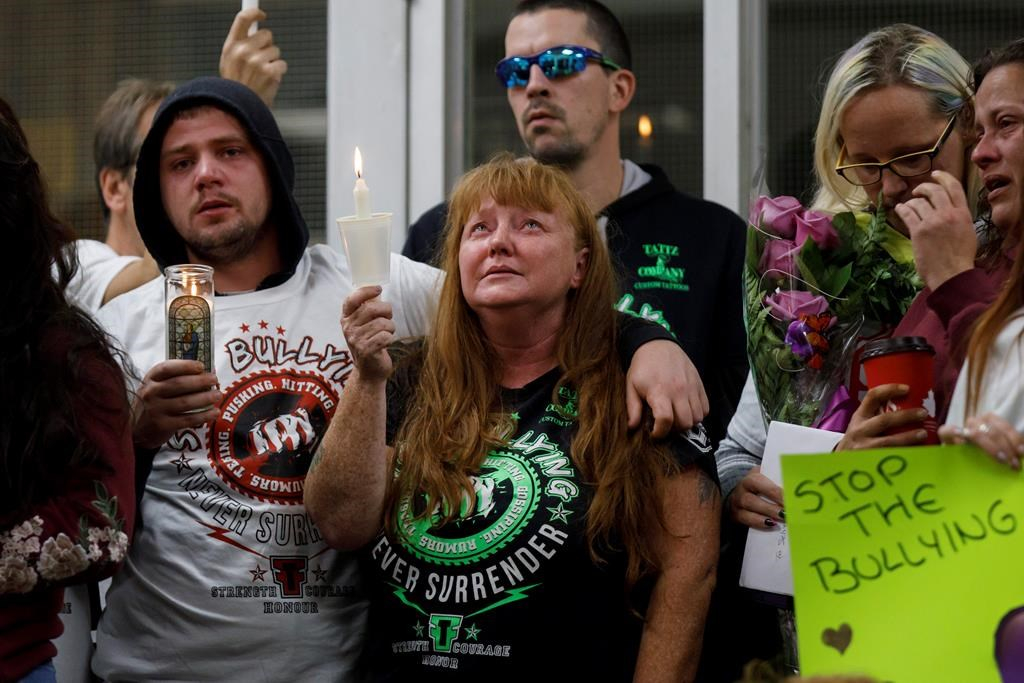 The shocking death of a 14-year-old Ontario boy who was stabbed outside his high school raises questions about the effectiveness of the anti-bullying campaigns that have gained prominence in Canada in recent years, those with expertise in the matter said Thursday.

The death of Devan Bracci-Selvey came after a month of relentless bullying from fellow students and alleged failures of the systems meant to protect him, according to his mother, who witnessed her son's violent death on Monday.

Researchers who study bullying and parents who have experienced its devastating effects first-hand said any potential failures don't stem from lack of awareness on the subject.

The past few decades have seen innumerable efforts to tackle the issue, with school boards, police forces, community groups and advocates all spreading the message.

But they all agree many of those approaches miss the mark, ensuring the cycle of violence goes uninterrupted.

Carol Todd, whose 15-year-old daughter Amanda took her own life in response to violent bullying, said in an interview from Port Coquitlam, B.C. that she's saddened to find herself discussing another case half a country away.

Todd, an educator with a Vancouver-area school board, said many of the bullying intervention strategies she's observed since Amanda's death are asking the wrong questions.

"We talk about bullying and we talk about how we can combat it, how can we end it," Todd said Thursday — seven years to the day her daughter died. "Are we doing enough to talk about the aspects of compassion, empathy, kindness and respect? Are we teaching our young people how to be respectful to other people and what to do?"

Todd said a common approach involves anti-bullying advocates making a one-time appearance in schools and delivering a lecture to students. She said that approach not only fails to resonate with students, but risks making sure the message gets lost entirely.

"In the school system, when you bring in an anti-bullying advocate now, kids are turning off their ears," she said. "They're tired of the conversation. We have to figure out different ways."

She said international research has clearly indicated that one-off interventions have little effect, saying the best approaches are usually implemented across an entire school and engage students and staff alike.

But such strategies do exist, she said, citing the Fourth R program developed at Ontario's Western University. The title of the program refers to "relationships," she said, noting emphasis on healthy human interaction is at the heart of effective anti-bullying efforts.

Another example of an evidence-based program is dubbed WITS, an initiative focused on elementary schools that also drew praise in a 2016 research project from Dalhousie University.

Pepler said provincial governments have a role to play too, noting those such as British Columbia that embed emotional intelligence measures into the curriculum are taking a step in the right direction.

"Schools are measured on how well they teach literacy and numeracy and science," she said. "But ... social emotional development should be included and it should start in junior kindergarten."

One strategy she said has consistently fallen short is the "zero tolerance" approach popular among many school boards. She said highly punitive strategies do nothing to address the root causes of bullying and wind up reinforcing the kinds of behaviour they're meant to eliminate.

"What we're modelling is that the adult who has the power gets to control and distress the student," she said. "On one hand, of course, there needs to be discipline. On the other hand, the child who's bullying has so much to learn about how to get along with others ... and they will never learn that by sitting on a bench."

This story by the Canadian Press was first published on Oct. 10, 2019