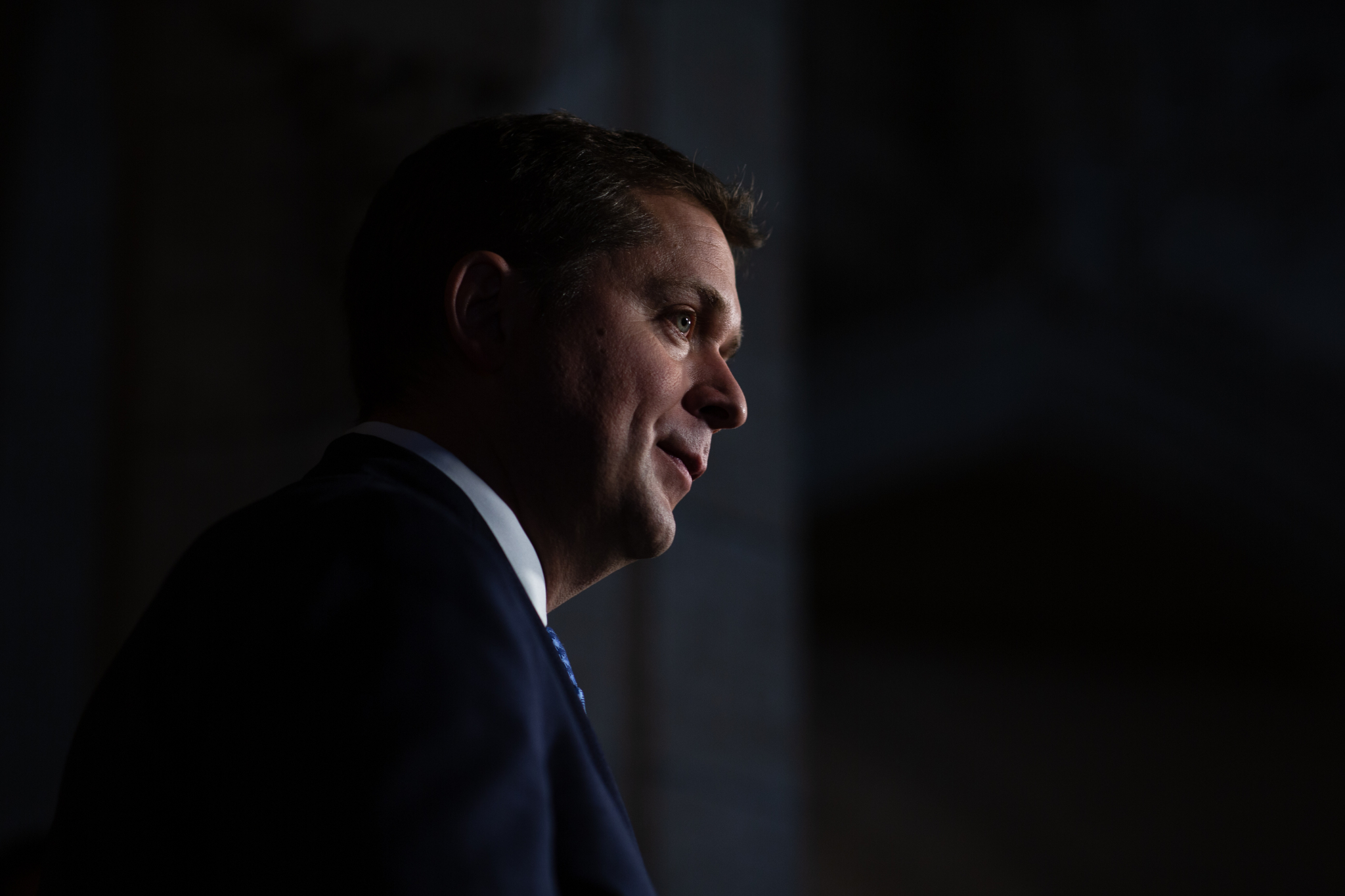 Party leaders hit the hustings at the start of the long weekend hoping to fire up their bases and their get-out-the-vote machines before turkeys are served on Thanksgiving tables — or drop on their chances at electoral success.

Justin Trudeau, Andrew Scheer, Jagmeet Singh and Elizabeth May all spent time Saturday in areas of the country where their parties have been competitive in the past, or that are seen as key to their path for electoral success.

The push also came on the second day of advance polls, as some voters stood in lines to lock in their choices before the campaign is even over.

Scheer sounded an optimistic note during a stop in Burnaby, B.C. — in the riding Singh holds as a New Democrat MP, in fact — saying that early indications from advance polls are "very encouraging" for his party.

Scheer was firm when asked about whether he planned to keep all his platform promises — "absolutely," he said — and named the two men who would lead a commission to find $1.5 billion in cuts to corporate subsidy programs — former British Columbia finance minister Kevin Falcon and former Via Rail CEO Yves Desjardins-Siciliano.

He was less clear on other topics, such as the future of the Bank of Canada, saying those are things his party would look at if it forms government.

"We're focused right now on earning the trust of Canadians. That's our focus for the next nine days," he said in the Vancouver suburb, possibly the most heavily campaigned-on place in the country since the election call in September.

On Saturday night, Trudeau took aim at Scheer during a rally in Mississauga, on Toronto's western edge, trying to link proposed spending cuts in the federal Conservative platform to cuts made in Ontario by Premier Doug Ford.

Trudeau also said the New Democrats, when they've been the official Opposition, have been unable to hold Conservative governments to account — as in Ontario now and when former prime minister Stephen Harper had a majority — to make the case for voters on the left to go Liberal with their ballots.

The event started about 90 minutes late — Trudeau's campaign didn't explain what caused the unusual delay — and saw the incumbent prime minister surrounded by exceptionally heavy security during and after the stump speech.

Earlier, and not too far away, Singh stood in his former political stomping grounds of Brampton and seemingly prepared for Trudeau's attack. Singh asked voters how many times a decision motivated by fear "made a massive change in your life," hoping voters instead "take a chance on something you believe in."

"I'm saying you don't have to choose between red and blue — you can choose orange this time," Singh said to partisan applause.

"The most important thing in this election is we need everyone to get out and vote."

While turnout from advance polls should be available by mid-week, Elections Canada said an estimated 111,300 people turned out during five days of on-campus voting, an increase of 59 per cent from 2015 turnout.

The New Democrats are fighting hard in ridings that could go their way if votes split among several candidates, hoping to capitalize on the positive attention Singh's had since his debate appearances. The NDP leader spent the rest of Saturday firing up volunteers and "mainstreeting" in the Toronto riding of Davenport, which the party hopes to retake from the Liberals.

The parties will keep reminding their supporters that it's not enough to feel positively toward a leader in the lead-up to voting day, finding different ways to motivate their bases. For the Conservatives, part of that effort included talking about the CBC.

The public broadcaster filed a legal application in Federal Court on Thursday against the Conservative party over its use of CBC clips in an online ad, which included footage from private broadcasters, and was subsequently removed from the party's social media accounts after the CBC complained.

In a statement Saturday, the broadcaster said that it would remove the names of two of its journalists from the legal action — anchor Rosemary Barton and Ottawa-based political reporter John Paul Tasker — when the court opens Tuesday.

The statement attributed to CBC editor-in-chief Jennifer McGuire and Radio-Canada executive director Luce Julien, said the broadcaster "was the driver of this process, not the journalists" and that Barton and Tasker were named "because their images and content were used inappropriately."

Elizabeth May of the Greens kicked off the day of campaigning in the Maritimes by promising to reverse changes to veterans' disability pensions, which have been controversial, as part of a broader review of how the government takes care of former soldiers.

She made the announcement just outside Charlottetown, home to the headquarters for Veterans Affairs Canada, and was scheduled to stop in at a campaign-office opening in Cape Breton before an evening rally in Halifax.

Also on Saturday, Elections Canada set the spending limits for federal parties. The Liberals, Conservatives, Greens and New Democrats will each be able to spend almost $29.1 million, the People's Party of Canada (which has fewer candidates) has a limit of about $27.8 million, while smaller parties have lower spending limits.

This report by The Canadian Press was first published on Oct. 12, 2019.

Practicality vs. ambition at the leaders' debate