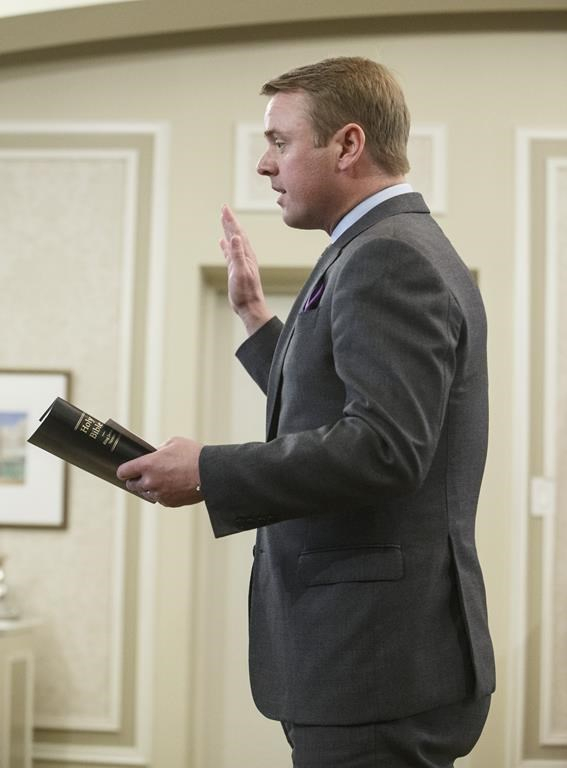 Tyler Shandro, Minister of Health is sworn into office, in Edmonton on April 30, 2019. File photo by The Canadian Press/Jason Franson
Previous story
Next story

The Alberta government is joining a class-action lawsuit to recoup health-care costs related to the opioid crisis, the province's health minister said Tuesday.

Tyler Shandro said there were almost 800 fatal overdoses and 4,200 emergency calls related to opioids in the province last year alone.

"Albertans have paid a high price for the irresponsible actions of opioid manufacturers and distributors," Shandro said.

"While we cannot bring back those we have lost, we can recover some of the enormous financial costs Albertans have paid and continue to pay."

The British Columbia government filed the proposed class-action suit a year ago, alleging drug manufacturers falsely marketed opioids as less addictive than other pain drugs, helping to trigger a crisis that has killed thousands.

The suit seeks costs from those manufacturers and distributors dating back to 1996, when the pain drug OxyContin was introduced in the Canadian market.

None of the allegations in the lawsuit has been tested in court.

Ontario and Newfoundland previously announced they are also joining the suit.

B.C. Justice Minister David Eby said the claim is national in scope and all provinces have offered their support so far, despite their differences.

"We've had our challenges with Alberta on different issues," Eby said. "But the fact that we can continue to work together on shared issues of priority like the harms caused by opioids, this is how Canada works."

Shandro said opioids were being over-prescribed by doctors in Alberta, and it's important manufacturers also be held accountable.

"One of the main reasons doctors over-prescribed is the companies told them that the opioids are safe. The manufacturers aggressively promoted the claim that opioids posed a low risk of addiction and that was misleading," Shandro said.

"And second, we're suing the companies because they over-supplied the drugs recklessly. They ignored evidence that the drugs were being over prescribed and diverted."

Alberta spends $53 million a year on health care connected to opioids and is planning to spend an additional $40 million.

"We must not just watch out for individual crimes but also large entities who pose a threat to our health, safety and peddle in misery and human despair," Schweitzer said.

In Edmonton, the NDP critic for mental health and addictions said the lawsuit is the right thing to do, but urged the government not to lose sight of other methods of alleviating the opioid problem while the legal wheels turn.

"This lawsuit is going to take a long time before we'll see anything happen," Heather Sweet said. "We're urging the government to continue to address the opioid crisis today and not wait until this lawsuit is finalized."

An Oklahoma court ruling in August found Johnson & Johnson helped fuel the state's opioid crisis and ordered the company to pay US$572 million.

Purdue Pharma, the maker of the OxyContin, filed for bankruptcy in the United States and proposed a multibillion-dollar plan to settle with thousands of state and local governments.

Eby said the lawsuit is back in B.C. court Nov. 15, when the province will be adding the Sackler family, who owns Purdue Pharma, as a defendant.

Eby said he wants to ensure Purdue and other opioid manufacturers and distributors are not selling their Canadian assets to pay for a settlement for Americans.

"The Canadian assets should be going to compensate Canadians and Canadian families for what's happened here."

He noted Canada is the world's second-largest opioid market but has been excluded from what is intended to be a global settlement.