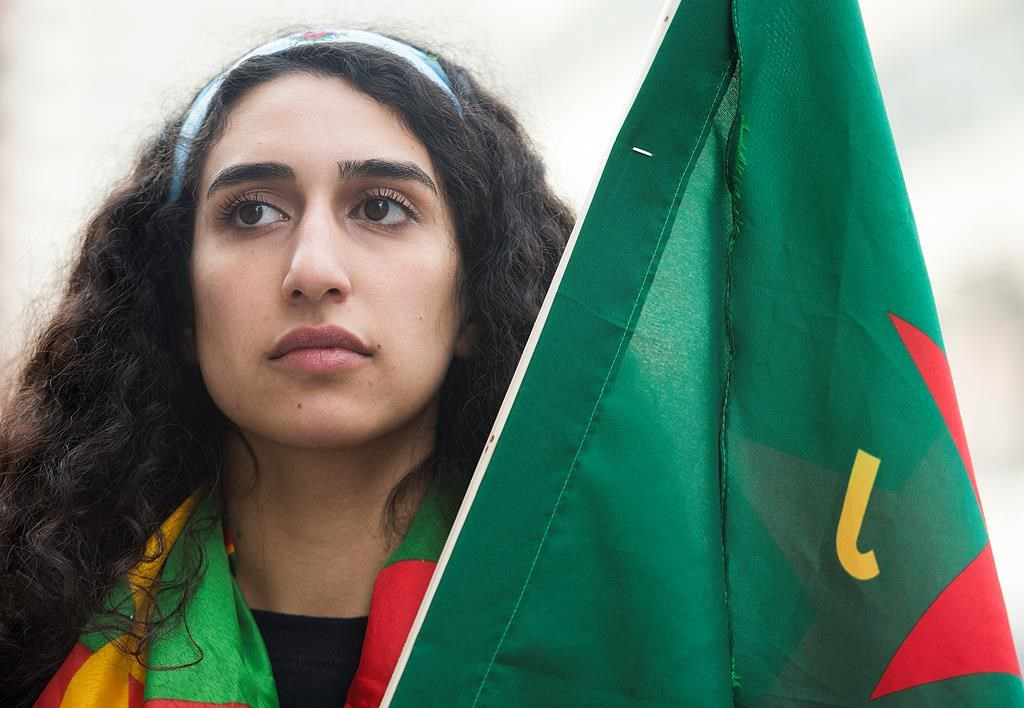 Beritan Oerde, an organizer with the Kurdish Foundation of Quebec poses in Montreal, on Oct., 12, 2019, following a demonstration against the Turkish invasion into Kurdish held territory in Northern Syria. Photo by The Canadian Press/Graham Hughes
Previous story

Members of the Kurdish-Canadian community said the Turkish assault could upend the stability of a fragile region, trigger an ethnic cleansing of Kurds and roll back progress against militants affiliated with the Islamic State, also known as Daesh.

Trump's decision to withdraw from Syria, which has drawn widespread condemnation internationally and across party lines within the U.S., is widely seen as an abandonment of the Syrian Kurdish fighters who have been America's sole allies in Syria fighting Islamic State.

Beritan Oerde, an organizer with the Kurdish Foundation of Quebec, says she hopes the downtown demonstration will help compel the international community to take stronger action.

"Sometimes we feel very far away but that doesn't matter. Any type of voice from across the world sometimes puts pressure on institutions and governments," said Oerde, a 22-year-old political science student at Concordia University.

"It's a harsh reality — this could have been me," she said, noting reports of dozens killed since tanks began to roll across the border over the past week.

Oerde, whose extended family fled Syria in 2013 after the civil war broke out, joined other demonstrators in calling for sanctions against Turkey.

Signs and banners wove through the crowd amid chants of "stop the war" at Montreal's Phillips Square Saturday afternoon. Demonstrators, some swathed in the colours of Kurdistan, carried signs reading, "Turkey gives life to Islamic State," and, "The West betrayed Kurds."

Zozan Akdenyz, 30, said she was "here to protect our humanity."

"All humanity, not only Kurdish people," added Mizgin Akdenyz, 28.

The two sisters, who arrived in Montreal from Turkey with their family as children, warned of the potential release of thousands of suspected Islamic State fighters who are under guard by Kurdish-led forces.

"They're killing children, women, civilians," Zozan Akdenyz said. "The world should be afraid."

She also pointed to her homemade sign. "It says that we are something you can never kill — we are hope."

On Friday, the Trump administration threatened crippling new sanctions against Ankara in a belated response to the cross-border assault, which Erdogan says will create a "safe zone" running along the Syrian side of the frontier.

"It's very appreciated, but a lot more needs to be done," said Hovig Tufenkjian, 41, a businessman and member of Armenian National Committee of Canada.

"Any crime that stays unpunished is bound to repeat itself," he said.

The protest in Montreal came ahead of a solidarity march in Vancouver on Saturday and on the heels of rallies in Winnipeg and Quebec earlier this week, part of a wave of demonstrations across the world.

Are we turning our back on Syria?