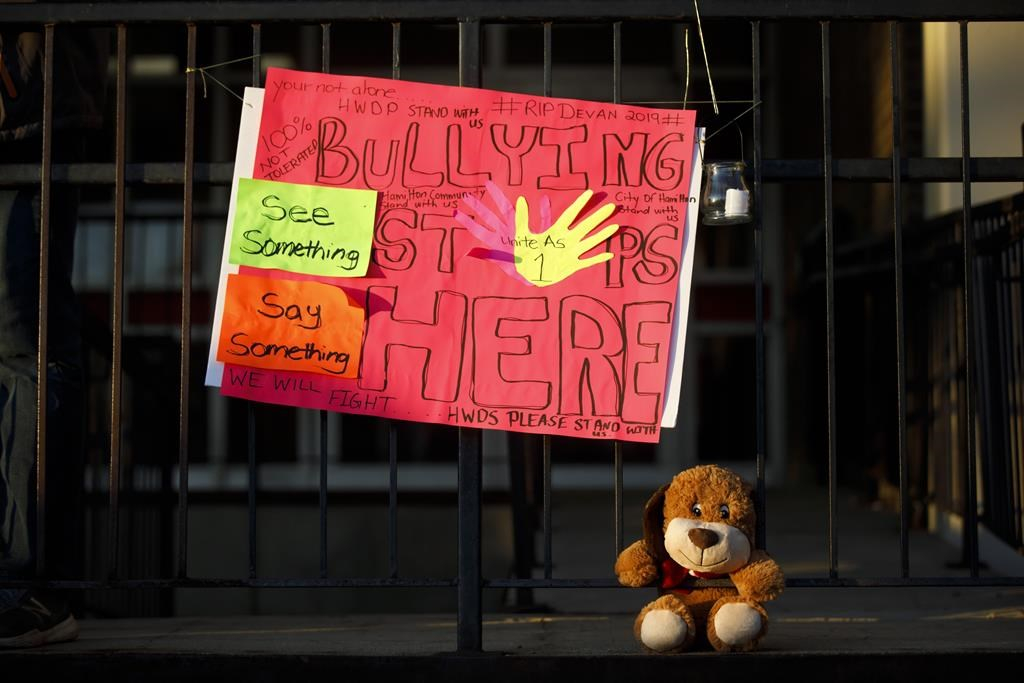 A sign and stuffed animal lay at the entrance to Sir Winston Churchill Secondary School ahead of a vigil for murdered 14-year-old Devan Selvey, at his high school, in Hamilton, Ont., on Wed., Oct. 9, 2019. File photo by The Canadian Press/Cole Burston
Previous story
Next story

Hearing about the stabbing death of a 14-year-old boy outside a school in Hamilton has Darrel Crimeni grappling with questions of bullying and a lack of empathy that may also have played a role when his grandson's overdose was filmed and posted on social media.

Crimeni said Carson Crimeni, who was also 14, was bullied relentlessly. On the day he died in August, Carson's family believes he overdosed after he was given drugs by others who wanted to share his reaction at a skate park in Langley, B.C., on the internet.

Now, Crimeni is thinking of Devan Bracci-Selvey's family in Hamilton, knowing they too are struggling to understand their loss, allegedly at the hands of a student who stabbed the boy in front of his mother outside of their school.

"My heart goes out to the mother," Crimeni said.

A girl who saw a meme of his grandson in distress on Snapchat told her mother and was instructed to call police, but by the time officers arrived the crowd had dispersed, Crimeni said, adding he found Carson half a kilometre away at a sports park in Langley about two hours later. He was pronounced dead in hospital.

Crimeni said students like his grandson, who had learning challenges, feel particularly unsafe at school because of bullies who are often known to administrators but face little or no consequences.

In Bracci-Selvey's case, first-degree murder charges have been laid against an 18-year-old man and a 14-year-old boy. But no one has been charged in Crimeni's death as police continue to investigate.

Shari-Ann Bracci-Selvey has blamed the system for failing to protect her son from "bullies" who she said made his first month of school a nightmare, saying everyone — from the school he attended to his own family — let him down.

Shelley Morse, president of the Canadian Teachers' Federation, said she was shocked at the level of violence after she returned to the classroom following four years at the helm of the Nova Scotia Teachers' Union.

"We had students beating other students up. The playground was not a fun place. We had students whose anxiety was so high they wouldn't come to school because of fear of the violence that was at our school," said Morse, who retired in June after 35 years in teaching.

"If I was a parent, I'd be alarmed at what my child may be witnessing at school," she said. "And it's not just here, it's all across Canada."

Morse said school violence will only increase as children using social media learn early on to hide behind a screen while watching negative behaviour and joining in with others who may be posting similar content.

Bullies have the upper hand when school boards don't back administrators if parents use an appeal process to object to consequences such as suspensions, she said, adding education ministries and departments are also not providing schools with enough tools to try and curb violence.

Morse said the violence she saw when she returned to teaching had her persuading the principal to work with her to adopt a philosophy that made a huge difference.

The hallmarks of the Positive Effective Behaviour Supports philosophy, which Morse believes was first used in the United States, involve teaching students empathy, compassion and responsibility.

"We went from having 20 kids sitting in the office waiting for someone to talk to them to, in 15 weeks, down to one or two students and some days none. And that has carried through because we taught the kids how to be kind, we taught them there would be consequences for being unkind, for being disrespectful. New students, all they knew was a culture of respect and kindness."

As part of the approach, students were rewarded with a blue ticket for good behaviour, which could include reporting potentially dangerous situations against their peers as part of the "be an upstander, not a bystander" motto they learned.

"They would put the tickets into a draw and once a week we would make a draw for a pizza party and you got to have a pizza party and invite seven of your friends and go to a separate room to eat," Morse said, adding prizes included movie tickets, with donations from community organizations.

"It was amazing to watch the transformation in that school and even the parents coming to us and saying, 'I can't believe how great it is. My child, who has anxiety, now wants to be in school.' "

The Department of Education and Early Childhood Development in Nova Scotia said the Positive Effective Behaviour Supports philosophy is used in some schools, but various regions use strategies that "best serve the needs of their local students and classrooms."

"It's time for parents to demand action."

This story by the Canadian Press was first published on Oct. 13, 2019