'Save the kids!' Dorian survivor tells the harrowing story of his wife's death 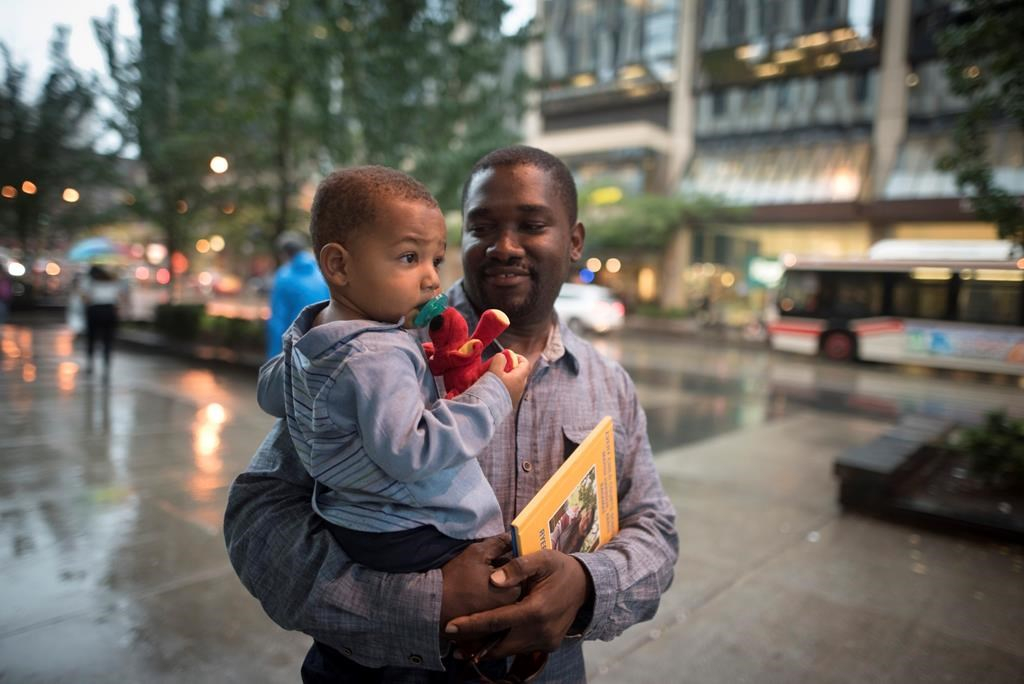 Alishia Liolli's husband Cialin Dany holds their child Evan, after attending a memorial service for Liolli, who died in hurricane Dorian in the Bahamas, in Toronto on Tuesday, October 1, 2019. File photo by The Canadian Press/Tijana Martin
Previous story
Next story

Cialin Dany knew he was in trouble when he saw a massive palm tree laying on the ground next to the Abaco Lodge.

As hurricane Dorian whirled at the door, Dany, 32, took his Canadian wife, Alishia Liolli, and two of their children and hunkered down in a room at the fishing resort where he worked. Then another tree slammed into the building.

The family and a friend who was with them ducked for cover under the bed and prayed. They watched as the wall in the back of the room swayed.

"Then the wall came down," Dany said as he recalled the events of Sept. 1.

The wall pinned all five underneath the bed. Their 18-month-old son Evans and Dany's 11-year-old daughter from a previous relationship, Kescianna, wailed with fear.

Dany's breathing laboured — the bed frame dug into his neck and right shoulder.

"Daddy, daddy, you don't sound too good," his daughter said.

He grabbed a piece of wood that flew into the room, jammed it under the bed frame and hit it repeatedly. The pressure on his neck eased. He moved a bit and grabbed another errant piece of wood and smashed the wall. He kicked his way through the rubble and slipped out from underneath the bed.

He scrambled to his feet, grabbed another piece of wood to lever the bed, but the wood broke.

"I need help," he said to his family.

Liolli told him to get a sledge hammer that was in another room. Dany slammed the tool into the wall, trying to break it up, but the handle snapped in two.

"I'm in really big trouble now," he thought to himself.

He tried lifting the bed near his friend, Luke Saint Victor, figuring if he could get another adult out, the two of them could save the rest.

"I ask God for one pound of strength more," he said.

He moved the bed up a bit, enough for his daughter to get out, then he turned to his wife, who was pinned under the wall.

"She threw me Evans and said 'save the kids!'"

Meanwhile, the water outside the one-storey building continued to rise.

He took the children and got into his car, but glass in the doors began to burst. A shard lodged near baby Evans' eye. Blood flowed.

The water rose fast. The car doors would not open, and his daughter started screaming.

Dany crawled out the window, took the kids and sprinted to a dumpster that had been blown on its side. They hid there for hours as maggots crawled everywhere.

A slight reprieve came when dawn broke and the sun peeked out. He returned to the lodge to try and save his wife and friend, but he couldn't lift up the wall.

Liolli told him to go get help.

Dany dropped his children off at their pastor's home, found a chainsaw that he hoped would free his wife and friend, and headed back to the lodge, which by then had been flooded.

When the chainsaw failed, Dany used an axe to cut the wall into pieces and finally removed the bed.

Underneath, his wife wasn't breathing. He performed CPR, but it didn't work.

"The problem was when she went under the bed, she went on her belly and Luke went on his back," Dany said. "The water came up, not much, like an inch or two, but it was enough."

"My head went blank," Dany said. "I was crying like a crazy man, just freaking out. I held her in my arms."

But there was no time for a long embrace. He flagged down a passing power truck, placed Liolli and Saint Victor on the flatbed and then rushed to the clinic. The chief of police, who was there dealing with a flood of bodies being brought in, saw Liolli.

Dany said he had to get back to his kids. He left Liolli there and prayed Saint Victor would pull through. His friend would die a few days later in Nassau.

After reuniting with his children, Dany called Liolli's family in LaSalle, Ont., to deliver the news.

Dany later returned to the clinic to figure out how to get Liolli's body off the island. The authorities moved it to a courtyard along with dozens of other bodies, hidden from the public, but it took a while for Dany to figure that out.

"Nobody would give me an answer, nobody was helping," he said.

Time was a problem. A body doesn't last long in the Bahamas heat.

"The smell was starting to rise up on the island," he said. "I needed to get the boy out of there. It was crowded, dark, and I didn't trust anyone."

The airport and docks were overrun with crowds, so he drove to Treasure Cay where he and Evans spent two days outside, getting bit by spiders and bugs, as they waited for a flight off the island. His daughter Kescianna stayed with his ex-wife.

The pair got to Nassau, where Deny was faced with a bureaucratic nightmare that went on for days. Back in Canada, Liolli's mom, Josie Mcdonagh, tried frantically to get the authorities to help.

"She helped a lot," Mcdonagh said.

Liolli's body finally made it to Nassau on Sept. 11. Dany had to identify it.

Liolli's body was too decomposed to be transported, so he and the family decided on cremation.

It took 20 days to get her remains to Canada.

"I just wanted her family to have something, so they could go somewhere and know where she is," Dany said.

The family held a funeral and placed Liolli's remains in a niche at a cemetery in Windsor, Ont. Afterward, they held a wedding for Liolli and Dany — they were common law wife and husband for years — complete with open bar.

Last week, Liolli's family and friends gathered at Ryerson University in downtown Toronto to celebrate her life. Her former sociology professor, Jean Golden, has launched a fundraising campaign to help rebuild Every Child Counts — a vocational school for children with special needs in Abaco that Liolli helped build and run. The school was destroyed during the hurricane.

"Alishia's dream will never be destroyed," Golden said through tears.

This report by The Canadian Press was first published Oct. 14, 2019.

Ontario woman's remains to return home from the Bahamas: mother