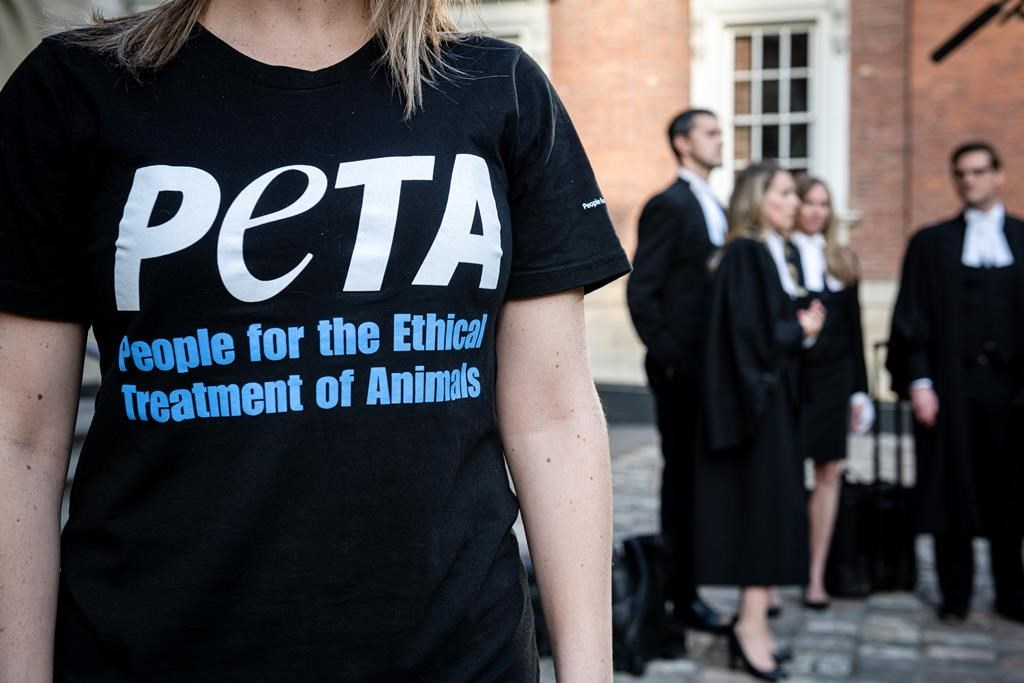 Animal rights activist and volunteer for People for the Ethical Treatment of Animals (PETA), Ashley Ollie, stands outside a courthouse following a hearing in Toronto, on Tuesday, Oct., 15, 2019. Photo by The Canadian Press/Christopher Katsarov
Previous story

People for the Ethical Treatment of Animals has taken the city to court over the removal of ads calling for a boycott of the Toronto-based clothing company over its use of animal products.

The advertisements were up for just one day last year before they were pulled down by Astral Media, court heard. PETA said in December 2018 that the ads were meant to run for four weeks.

Astral Media has a contract with the city to build and maintain street furniture such as bus shelters, and the company can sell ads on that furniture and share revenues with the city.

Canada Goose has previously fought complaints about its use of fur, saying it is committed to the ethical treatment of animals.

A spokesperson for Bell Media Inc., which owns Astral, said at the time that the ads were not in line the Canadian Code of Advertising Standards, which restricts ads from disparaging organizations or causing public ridicule.

PETA claimed it was not violating the standards, and on Tuesday a lawyer for the group said "freedom of speech is the central issue" in the case.

PETA alleges Astral took the ads down after a single complaint that came from an advertiser for Canada Goose.

In an email to Astral that was filed with court, a director at an advertising agency that works with Canada Goose wrote that the clothing maker had spent "quite a bit of money with Astral over the past year or so."

"So it was incredibly disappointing that you guys would take this advertising without giving us a heads up ... is there anything that can be done here?" Brian Rappaport wrote.

An Astral employee responded that the company was "putting the wheels in motion to remove these ads ASAP."

Astral told court it warned PETA in advance that if it received just a singe complaint about the ads, they would be taken down. It says it does not allow ads that disparage other organizations, and it would not run anti-PETA advertisements, lawyer Steve Mason said.

He pointed out that PETA’s lawyers signed off on the contract and the company knew the ad could be pulled if a complaint arose.

PETA and intervener Animal Justice are trying to convince an Ontario Divisional Court to undertake a judicial review of the matter.

The three-justice panel hearing the case in Toronto limited oral arguments to whether court had jurisdiction on the matter.

PETA argues Astral is working on behalf of the city, and therefore must act like a public body, which means its decision to remove ads violated PETA's free-speech rights.

Astral and the city argued the matter is between private companies based on a commercial contract, and thus the court does not have jurisdiction to conduct a judicial review.

The judges reserved their decision.

Canada Goose has long been in PETA's crosshairs. Members of the group, sometimes dressed as coyotes, have protested in front of the apparel company's stores and repeatedly billed it as a perpetrator of "shameless cruelty."

Companies in this story: (TSX:GOOS), (TSX:BCE)

What a misleading title for

What a misleading title for an article. Who chooses them?